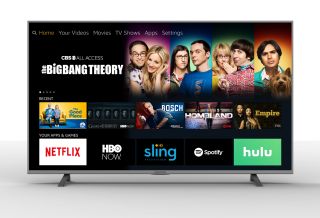 Amazon Fire TV owners can now ditch the remote. A new feature, introduced today, allows Fire TV (both the Fire TV Box and the Fire TV Stick) and Fire TV Edition owners to pair their devices with any Echo product (the Echo, Echo Dot, and Echo Show) and control what they see using nothing but their voice.

Previously, Amazon Fire TV owners needed to press the microphone button on their remotes in order to search for programs and the like using their voice. Now, by connecting to an Echo, they merely need to say "Alexa, open ESPN on Fire TV," for example. Other voice controls include the ability to launch apps, search for actors, genre, and movie and TV titles, and play, pause, and fast forward.

Additionally, Fire TV owners will be able to view a live feed from security cameras and doorbell cameras on their TV. This feature will be rolled out "soon," according to a company representative. Cameras that will be initially supported include those from Arlo, Amcrest, August, EZVIZ, and Ring. However, you will not be able to view a feed from the Echo Show on your Fire TV.

Integrating all of its Alexa-enabled products with its Fire TV devices is a natural next step. However, adding voice recognition for specific individuals should be next on Amazon's priority list; otherwise, what's to stop your kids from changing the channel from Meet the Press to Paw Patrol?