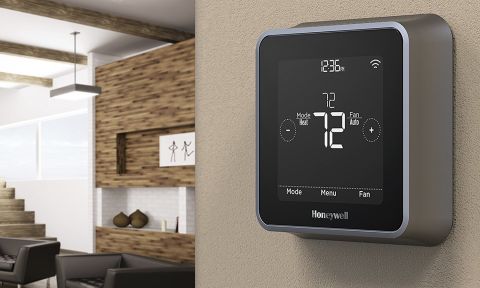 The Honeywell Lyric T5 is a capable smart thermostat for homeowners on a budget.

Not everyone wants to spend upward of $200 on a thermostat, even if you can control it remotely from your smartphone. Honeywell's midrange Lyric T5 smart thermostat ($149) occupies the ground between the company's flagship Lyric Round ($199) and its budget Wi-Fi- connected thermostat, which retails for around $100. So although the Lyric T5 has fewer features than the Lyric Round, it has a better design and app than the company's budget Wi-Fi thermostat, making it a sensible choice, but not one of the best smart thermostats out there.

Unlike the Lyric Round, the Lyric T5 has a square design with silvery-plastic beveled sides and a black front. Because of this design, you can't twist the T5 as you can with the Lyric (and the Nest) to change the temperature. It's a shame, but the on-screen controls work easily enough.

At 3.2 x 3.2 x 0.7 inches, the T5 is about the same size as the Wiser Air smart thermostat, though the T5's display is larger, at about 2 x 2 inches. Though it has a monochromatic readout, it's plenty large — even bigger than the Lyric Round's display.

MORE: The Best Smart Thermostats for Comfort and Savings

The process of setting up the T5 is the same as with most thermostats. First, you have to install a baseplate on your wall, connect the wires leading from your HVAC system to the baseplate and attach the front of the thermostat to the baseplate. In all, this part of the process should take you no more than 10 minutes. I especially like that you don't need a screwdriver to attach the HVAC wires to the baseplate, as you do with Honeywell's RTH8580WF Wi-Fi Thermostat.

If you use the Lyric app to set up the T5, the thermostat will start broadcasting a Wi-Fi signal for you to connect to from your phone. Then, the app automatically connects the thermostat to your home Wi-Fi network, which makes a usually painful part of the process much easier.

Then, you're walked through several other screens, where you specify what kind of heating and cooling system you have, and where the thermostat is located in your home.

Aside from being monochromatic, the T5's display is best described as utilitarian. In the center, in large numbers, is the current temperature. On either side are the "+" and "-" arrows for changing the temperature; the target is displayed in smaller numbers. Also shown are your HVAC system's current mode (Heat, Cool or Off), the Fan mode and the thermostat's status (Away, Home or Sleep).

When not in active use, the T5 displays just the current temperature in the center, and the time, in smaller numbers, at the top of its display.

The large, blocky, white numbers on the black background made the T5 feel more like an old calculator than a smart thermostat. It's functional, but it doesn't really feel like you're using a next-generation product.

MORE: Smart Home Guide: What to Know Before You Buy

The T5 uses the same app (Android and iOS) as the Lyric Round, which, like the thermostat itself, isn't anything particularly special but is easy for just about anyone to use. The top two-thirds of the screen are white, with the exception of the temperature reading.

At the bottom of the screen is an arc with numbers spanning its edge. You can swipe left or right here to change the temperature on the fly. The arc turns orange when heating and blue when cooling. It's handy and functional.

Within the app are settings to adjust the geofencing range, manage users (you can have as many users as you want, but they'll also have to install the Lyric app on their phones), set up HomeKit and Siri, and turn on Vacation mode. In the upper-right corner is an icon that alerts you to events, such as needing to change the air filter.

Like the pricier Lyric Round, the T5 can connect to both Apple's HomeKit and Amazon's Alexa, so you can control it from other systems and link it with other smart home devices to create scenes. The ecobee3 lite also connects to those systems but goes much further, and is also compatible with Samsung SmartThings, IFTTT, Wink, and Control4 systems, making it potentially more valuable to those who already have a smart-home setup.

Also like the Lyric Round, and unlike the ecobee3 lite, the T5 has a geofencing feature, which means you can set the thermostat to turn on or off if it detects your phone is within a certain distance. This is probably its most practical feature, especially for those who don't have a set schedule of when they leave or return home. And, within the app, you can set the radius for as small as a few feet or as large as several thousand miles; the latter makes little sense, but at least you have the option.

However, the T5 lacks a Smart Away button, weather information, humidity control and a motion sensor. (In contrast, all of these features are included on the Lyric Round.) So although the thermostat will activate based on geofencing, it won't turn on if it senses someone walking in front of it.

The Honeywell Lyric T5 is a competent device for those who don't want to pay top dollar for a smart thermostat. Although it lacks the extensive smart-home networking of the comparably priced ecobee3 lite ($169), its best feature — and one the ecobee lacks — is its geofencing, which will automatically turn the heat or air on when it senses you're getting close to your house. At the end of the day, what could be better than returning to a warm home?