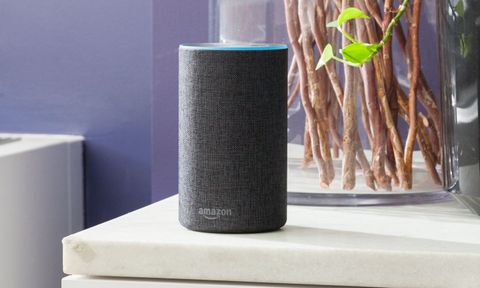 Amazon's second-gen Echo is more attractive and more affordable than the original, and it sounds just as good, too.

It's been five years since Amazon's revolutionary Echo appeared and sparked the smart home speaker industry. Now, there are more than a dozen Alexa speakers on the market, with more on the way. And while Amazon has launched plenty of other Alexa-enabled devices since then, the second-generation Echo remains an excellent step up from the first-gen Echo. Although the 2019 third-gen Echo took over at the top of our best smart speakers page, this iteration is still considered one of the  best Alexa devices.

Amazon hasn't really placed a premium on making its devices stylish. Just look at its phones, tablets and first-generation Echos. That's (hopefully) changing with the second-generation Echo. Not only is it more compact than the original, but it looks have greatly improved.

Rather than an industrial-looking cylinder whose lower half is perforated with holes, the all-new Echo has a soft, fabric-colored exterior that blends better into your home decor. Yes, Amazon may be ripping off Google and Apple, but if you can't beat em….

If the fabric look (which comes in three colors) isn't for you, the second-gen Echo's cover is removable (just like the Google Home); you can swap it out with other skins, including walnut, oak and a metallic silver.

At 5.9 inches tall and 3.5 inches in diameter, the second-gen Echo is slightly wider, but several inches shorter than the original, which stood at 9.25 x 3.3 inches in diameter. Size-wise, the newer Echo is very similar to the Google Home, which measures 5.62 x 3.79 inches around.

Like the original, there's an LED ring around the top edge of the Echo that turns blue when it's listening, and red when the microphone is off. On the top of the second-generation Echo is a button to activate Alexa and one to mute the microphone. However, instead of a twist dial to control the volume, the second-gen Echo has two buttons, like the Echo Dot. More functional, but not as fun. Around back, next to the power port (yes, you have to plug it into an outlet), is a 3.5mm audio out jack, in case you want to attach a better speaker. It also has Bluetooth, so you can connect to a speaker wirelessly, too.

When I originally tested the second-gen Echo, I was disappointed with its audio quality, which Amazon was touting as having "improved sound." In fact, it sounded worse than the original Echo. However, Amazon worked on a firmware improvement which it said would fix many of the issues I, and others, experienced.

After testing the Echo with the updated firmware, I heard a marked improvement that brought it up to, if not better than, the same level acoustically as the original Echo. As long as you don’t expect too much, the new Echo will suffice for someone looking for a single smart speaker for their living room.

While both the first- and second-generation Echoes have a 2.5-inch woofer, the second-gen Echo also has a much smaller tweeter - just 0.6 inches, compared with the 2-inch tweeter on the original. The difference with regards to higher tones was less pronounced, but was still noticeable.

Coming soon, not just to the Echo but to all Alexa devices, is the ability for the devices to recognize what room they’re in.

When playing the Beastie Boys’ Sabotage, again I felt the midtones were somewhat compressed, but there was a lot more definition in them. The bass was also much stronger, too.

Rhapsody in Blue reinforced my opinions. Here, I slightly preferred the original Echo, as the piano solos were clearer, and the speaker sounded less muddy than the second-gen Echo when the entire ensemble blared out Gershwin’s masterpiece.

Still, I was pleasantly surprised at the higher quality of the audio coming from the second-generation Echo. Billie Jean by Michael Jackson showed a definite improvement--there was a nice driving bass line, and the King of Pop’s vocals, while somewhat muddy, weren’t as tinny as on the original Echo.

MORE: How to Use Amazon Alexa’s Drop In Feature

The all-new Echo has seven microphones arrayed on its top, and uses beamforming technology and noise cancellation to hear your voice, even with music playing. Even so, I found myself raising my voice to a near shout when I wanted to be heard from about 10 feet away.

As with other Alexa-enabled devices, you can use the Echo to interact with Amazon's voice assistant, which means everything from streaming music to controlling your Amazon Fire TV to playing cat sounds. There are more than 70,000 third-party "skills" that enable more features for Alexa; after going through a lot of them, we have a list of our favorites. You can also use Alexa to control smart-home devices, such as lights, locks and garage door openers.

The Echo, along with most other Alexa devices, can also be given a room designation, so that you don't have to say "Alexa, turn on the dining room lights," merely "Turn on the lights" once you're in the dining room—if you have an Alexa device there. You can also group multiple Alexa speakers together, letting you stream the same songs throughout your house. And, you can also pair two Echos together for stereo sound; if you want to add some more bass, Amazon also makes the Echo Sub, but it only works with the 1st- or 2nd-Gen Echo, 1st-or 2nd-Gen Echo Plus, 1st- or 2nd-Gen Echo Show, or 3rd-Gen Echo Dot.

Another handy feature are Routines, which let you group a number of devices together into a single activity, so you could say "Alexa, good morning," and have your lights turn on and the coffeemaker start percolating.

MORE: How to Use Multi-Room Music with the Amazon Echo, Echo Dot, and Echo Show

If all you want is Alexa, and don't plan on using the speaker much for listening to music, then you're better served with the third-generation Echo Dot. It's usually on sale for less than $50, and has a much improved speaker over the earlier models, making it great for a bedroom, where you might want to listen to a few tunes or the weather and traffic info in the morning. But, if you're planning on making the Echo more of a centerpiece in your living room, it's worth spending a few more bucks for the better fidelity of the Echo.

With the updated firmware, the all-new $99 Echo is a step up aesthetically and on a par acoustically as the original. While not the best-sounding smart speaker—the $199 Sonos One takes that crown—it's a great option for those who are looking for an Alexa-enabled speaker that can hold its own as your primary music player. For those who want a simple but good-sounding smart speaker for less than $100, the all-new Echo is your best bet.