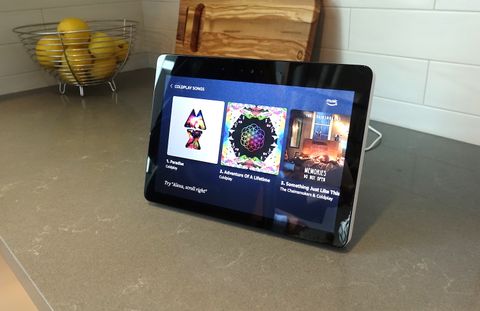 While still a bit confused about what it wants to be, the second Echo Show is a huge improvement over the first.

Voice assistants aren’t just about “voice” anymore. Amazon proved that last year with the launch of its Echo Show, the first Alexa speaker with a screen. The second generation of that device is sleeker, snazzier, and better in than its predecessor in every way.  Many of the new Show’s most exciting features are still in the works, but its audio, display, and design are head and shoulders above its first generation. It’s a handy smart-home assistant that can act as a tablet, or even a miniature TV. And, at $229, it’s the same price as the original. However, it needs to do a little more before it can take the Lenovo Smart Display's place on our best smart speakers page.

When it came to design, the first Echo Show was nothing flashy. It was all sharp edges, black plastic that attracted fingerprints like flies, and generally boasted a utilitarian, uninspired look.

The fabric backing and shorter, longer wedge shape of the second-generation Echo Show is a definite improvement. I’d feel comfortable placing this device on a desk, coffee table, or countertop in a modern home. And the rounded edges made the new Show comfortable to hold in my lap while browsing or watching videos—something that was always uncomfortable with the old Show.

Like the first-generation, the new Show has three buttons on the top: a button to mute and un-mute the microphone, as well as volume controls. On the back is a microUSB network connector as well as an input for the power supply. There’s no button to turn off or shutter the camera, which may disappoint users who are nervous about snooping.

The one thing the older Show has going for it is size. At 9.7 inches wide and 6.9 inches tall, it’s a good deal larger than the older Show (7.4 inches wide and 7.4 inches tall).  If you have limited space on your counter or nightstand, the new Show may be a bit harder to squeeze in. That said, the device is still compact and sturdy enough that I was comfortable mounting it on my bedpost and a small corner of my desk.

The older Show’s seven-inch screen looked much like those on the back of airplane seats, and with its large bezels and placement several inches above the base, it wasn’t something I would have enjoyed watching a full movie on. The panel was also low resolution at 1024 x 600 pixels, and I couldn’t see many details.

Amazon has moved the Show’s speaker to the back and removed the plastic bezels, and the new 1280 x 800 device looks much more like a miniature flat-screen TV. When it comes to watching movies in bed or on the couch, I actually prefer the new Show to my computer.

Watching the Wonder Woman trailer, I noticed the bright blues of the sea, and the bright blaster bolts as they ricocheted off Wonder Woman’s Shield were bright against various backgrounds. An establishing shot of a city skyline at night in the Amazon original King Lear was gorgeous, with the city lights standing brilliantly against the night sky.

However, the glare that plagues the screens of the Echo Spot and the older Show is still very present here. It’s not horrible, but your screen will kick back reflections in all but the darkest of settings.

The new Echo Show’s audio quality is excellent, and the bass booms. The older Show’s dual two-inch stereo speakers have been upgraded to dual two-inch premium drivers with a passive bass radiator. The improvement shows.

As Queen’s “Another One Bites the Dust” played on my nightstand, I could feel the bass line reverberating not only through the nightstand, but through my bed. It easily filled my (studio, admittedly) apartment with sound, and I will definitely use it at the next party I throw.

The music was easily louder and clearer than any Amazon speaker I’ve ever tested (including the original Echo), and even edged out the Lenovo Smart Display in a side-by-side test.

Like the Echo Spot and older Show, the new Show sometimes displays song lyrics. When it doesn’t, however, it usually displays the song’s album cover with photos of its artist in the background. I found this more pleasing to look at than the older show, which usually only shows one or the other.

I always felt a little weird taking tapping on the older Show’s touchscreen -- again, probably something to do with the airplane-seat dimensions. Not so with this new device, which really feels like a tablet.

I enjoyed using the touchscreen to scroll through lists of videos or recipes. However, you still have to ask Alexa to pull up these lists (or navigate away from the home screen at all), which I found a bit cumbersome. If it’s late at night and my roommate is asleep, or if it’s early in the morning and I don’t feel like chatting with Alexa, I would appreciate the ability to use the Show as a fully touchscreen device.

This is where Amazon could take a leaf from the Lenovo’s book. By pressing various icons on the Smart Display’s home screen, you can navigate to your calendar, the weather forecast, recipes, and anywhere you need.

The one place where the Show has a solid advantage over both the older Show and Lenovo’s display is that it’s now equipped with not one, but two web browsers: Firefox and Amazon’s Silk. However, the experience could be better.

Once you’ve asked Alexa to launch a browser, you have to navigate on the screen to the website you want. I was disappointed to see that “Alexa, open Facebook in Firefox” didn’t do anything. Amazon told me that it’s waiting to see how users interact with the browsers before introducing more voice functions.

Browsing and typing on the Show is a bit clunky. In both Silk and Firefox, the keyboard took much longer to pop up than it does on a phone or tablet. The keyboard also contains a large microphone icon in its center, which meant my hands were pretty far apart as I typed. It felt unintuitive, and somewhat awkward.

What I found most frustrating, however, was that the keyboard obscured the Show’s entire screen, meaning I couldn’t type a message while referencing other messages, or an email, at the same time. While responding to an email, I had to pull the first email up on my phone so I could check and reference it while I typed.

For these reasons, I probably wouldn’t use the Show for casual browsing apart from YouTube videos.

When the older Show rolled out, only 17 skills had been enhanced for its display. An Amazon spokesperson wouldn’t tell us what that number is now, but did say that “customers have interacted with visual skills hundreds of millions of times.”

A number of skills have recently added visual interfaces since the last Show’s launch, including the popular Song Quiz musical trivia game, and Earthcam, which delivers live video feeds from various parts of the world. Other popular skills, such as the Magic Door fantasy game, still just display their icon on the screen.

I wish the Show had a complete list of the skills that were enhanced for the display, so those of us with multiple Alexa devices could quickly check which ones we can use on an Echo or Echo Dot, and which ones we should use on the Show.

You can also watch live TV and sports with Hulu and NBC, which is something I’d love to use the show for while cooking in the kitchen, or doing other things at my desk.

Amazon recently added a neat new accessibility skill to Echo Show devices called "Show and Tell."  It helps blind and low vision customers identify common household pantry packaged goods that are hard to distinguish by touch, such as canned or boxed foods. Customers can say, “Alexa, what am I holding?” or “Alexa, what’s in my hand?” in front of the display to get started.

You can use the Show to call other Alexa devices (including those in your home), or to call the Alexa app on a friend’s phone. The intrusive Drop-In feature is still around, but only friends who you’ve designated as “permitted contacts” can drop in on you. We still recommend revoking a contact’s permission after your conversation, in case others in their household, or suspicious characters, are ever able to gain access to their device.

Video looked good on the Show’s built-in 5-megapixel camera. I could see the details of my face and the background pretty well. That said, it was certainly grainy compared to the iPhone 8 Plus’ camera, which my friend was using to chat with me.

You’ll soon be able to use Skype on the Echo Show, which is one of the most exciting upcoming Alexa features. I’ve never used Alexa to video call friends or family, since very few of them have an Echo Spot or Echo Show. When Skype for Echo Show rolls out, that’s definitely going to change.

Scan and Shop: Convenient, if you’re into that

Though it’s recently become apparent that very few people actually use voice shopping, the option is still there with the new Show. To search for an item you already have, you say “Alexa, scan,” and hold the item’s barcode in front of the Show’s camera. Alexa will pull up a list of similar items available on Amazon, which you can scroll through. As someone who could never be bothered to sit through Alexa reading a long list of options on the Echo or Echo Dot, the Show’s display certainly makes shopping more convenient.

The scanner was quick and accurate. The Show only took about six seconds to scan and find a copy of John Green’s Turtles All The Way Down, and a bright animation and very cute noise informed me when it found a match.

I can’t see myself ever using this feature, as I rarely find myself ordering things on Amazon that I already have in my house. Still, if someone were far away enough from a store that they needed to order new paper towels, soap, or food items, I can see this being a convenient option.

I asked Alexa for fried rice recipes, and got a long list compiled from Allrecipes, Kitchn, Sidechef, and Kitchen Stories. I was able to scroll through the list and select one that looked good -- the photos next to each were very helpful.

Alexa read me the instructions for the recipe I’d selected (pork fried rice), and I was able to skip, or go back to, any step using buttons on the screen. I liked that Alexa remembered where I was in the recipe. After exiting to the home screen in the middle of cooking, “Alexa, continue the recipe,” allowed me to pick up where I’d left off.

The new Show contains a Zigbee smart-home hub, a huge upgrade from the older Show as well as Lenovo’s display. This means you can use it to set up some smart-home products that aren’t Wi-Fi enabled, such as Philips Hue’s smart bulbs. I was able to set up a Hue A19 without a problem, and the Echo Show had no issues turning on and off my bulbs and plugs.

The other neat upgrade is two-way communication. If you have a smart doorbell, such as the Ring Video doorbell, you can now use your Show to communicate back-and-forth with a guest who’s at the door.