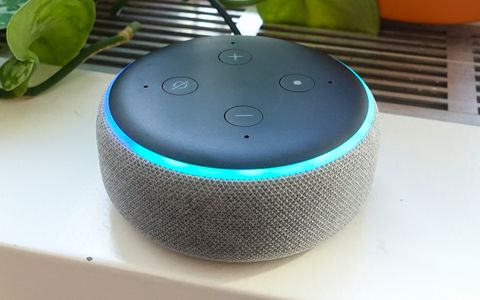 With a nicer design and vastly improved audio, the third-generation Echo Dot is Amazon's best, cheapest speaker yet.

When the first Echo Dot came out, it propelled Amazon to a huge lead in the smart home arena. At $49, the Dot was an inexpensive way to get Alexa into your home, and it made for a great gift, too. In fact, it's the best Alexa device you can get on a budget.

However, Google's response, the Home Mini, not only looked better, but sounded better, too. With the third-generation Echo Dot ($49), Amazon returns to the top of the budget smart-speaker pack. It's why we named it one of our best smart speakers.

Update: Amazon has a alternative version of the Echo Dot, which costs $60 and come with a built-in LED display. It's called the Echo Dot with Clock.

Through the holiday season, the Echo Dot is being heavily discounted, making it an excellent time to pick up this budget smart speaker. Here are some of the best deals we've found.

Echo Dot w/ Amazon Music: was $49 now $1 @ Amazon
The Echo Dot 3rd Gen is our top-rated smart speaker. Sign up for one month of Amazon Music Unlimited ($7.99/month) and you can get an Echo Dot for just $1. Combined with Amazon Music you'll pay $8.89. It's one of the best Echo Dot deals we've seen. The deal is applicable to new Amazon Music subscribers only. (Bear in mind that Amazon Music will auto-renew, so remember to cancel your subscription if you don't want to continue paying for Amazon's streaming service).View Deal

Amazon seems to take a belated approach to product design. The original Echo, Echo Dot and Echo Show were utilitarian at best, with hard plastic shells and a sort of generic, budget-factory finish. It took the pressure of Google's much more attractive Home and Home Mini to get Amazon to think more seriously about what its flagship Alexa devices looked like.

As a result, the third-generation Echo Dot trades in the all-plastic sides of its predecessors for a cloth-covered finish. With softer, more-rounded edges, the new Dot looks less like a hockey puck and more like something you'd want in your living room.

As before, the top of the Dot is ringed with LEDs that light up blue when Alexa is listening; you'll also find two volume buttons, a button to turn the microphone on and off, and a button to activate Alexa.

At 3.9 inches in diameter and 1.7 inches tall, the third-generation Dot is slightly larger than the second-gen Dot, which is just 3.3 inches wide and 1.3 inches high.

While the third-generation Dot is available in three colors (charcoal, heather gray and sandstone white), its new design means that you can no longer use many of the third-party skins, cases and accessories that were made for the second-generation Dot.

At 1.1 inches, the speaker in the third-generation Dot is a full half-inch larger than its predecessor, and the extra size shows. Playing songs on the second-gen Dot was a torturous experience, like listening to music on a third-rate transistor radio.

From the opening bars of Bruce Springsteen's "Thunder Road," it was immediately apparent that the new Dot is far superior. The opening drumroll sounded like static on the gen-2 Dot, but on the gen-3 Dot, Max Weinberg's sticks finally received their due. I could also clearly hear Clarence Clemons' sax belting through the song.

But how does the new Echo Dot compare to that other budget smart speaker, the Google Home Mini? As it turns out, it's better in most respects. When playing Prince's "Raspberry Beret," the Dot had much fuller bass and was louder overall. Vocals were a bit muted at the default equalizer settings, though increasing the treble to max helped a little.

On the Mini, Prince's vocals were a bit more forward and defined; I found the same thing with Aretha Franklin's "Respect"; she, and the sax solo in the middle of the song, felt a little crisper than on the Dot, which seemed a little muddy by comparison.

Still, I think most people will prefer the fuller sound that comes from the Echo Dot over the Google Home Mini's sound. To be sure, though, the Dot still sounds nowhere near as good as the full-size Echo, which benefits from both a subwoofer and a tweeter.

There’s one very handy audio feature rolling out to all Echos. You can ask Alexa to adjust the equalizer settings of the Dot; for example, you can say, "Alexa, set the bass to maximum," or, "Alexa, reset the equalizer." (You can increase treble and bass from a scale of -6 to 6.)

While you won't see a huge difference on the Dot, the effect should be more pronounced on other devices.

What you can do with Alexa

The previous Echo Dot had seven mics to pick up your voice, and did a good job at it; the third generation was equally sensitive and responsive, and just as good at hearing me.

Alexa's abilities keep growing, so it's hard to keep this part of these reviews up to date. Suffice it to say, there are now more than 50,000 skills available, which include everything from playing Jeopardy to turning on your lights, ordering pizza and getting a ride to the airport. Here are the 50 of our favorite skills for Alexa.

On the Echo Dot (as with other Alexa speakers), you can stream audio through Amazon Music, Spotify, Deezer, SiriusXM, Pandora, iHeartRadio and TuneIn.

Like its skills, Amazon keeps adding new smart home partners, so you’d be hard-pressed to find a device that doesn’t work with Alexa. From thermostats to lights to locks, plugs, switches, and cameras, most of the top brands can be controlled via Alexa. Amazon is also developing smart home Routines, where you can control a bunch of smart home devices with a single command, such as “Alexa Goodnight” to shut off all your lights and lock your doors. It isn’t as robust as what you can do with a smart home hub such as SmartThings, but for most consumers it will suffice.

MORE: The Best Products That Work With Amazon Alexa

Other features include the abilities to use Alexa to call and message others, drop in on other Alexa devices, and broadcast a message to every Echo device in your home.

When we reviewed the second-gen Echo Dot, our only complaint was that its speaker wasn't great for music. Well, Amazon fixed that, making the third-generation Dot a smart speaker that's actually worth listening to. At $49, the third-gen Dot is the best, most affordable way to get Alexa into your home.

If I had to nitpick, I'd mention that you can no longer add a cover to the Dot's exterior to change its look. Other than that, for the price, the Echo Dot is a practically perfect smart speaker.