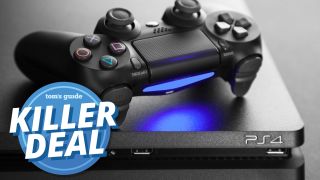 Thanksgiving may be over, but retailers are still offering some of the best PS4 deals of the year.

Currently, you can get the Sony PS4 Pro with Marvel's Spider-Man: Game of the Year Edition for $279.99 on eBay. That's $20 cheaper than the best PS4 Pro bundle we saw on Black Friday / Cyber Monday and the best PS4 Pro deal we've seen all year.

Normally, the PS4 Pro console retails for $399 whereas Marvel's Spider-Man is priced at $39. This bundle takes $120 off the console's price and throws in a free game. So you're saving $205 overall.

PS4 Pro 1TB w/ Spider-Man GOTY: was $484 now $279 @ eBay
This bundle includes a 1TB PS4 Pro console and Marvel's Spider-Man: Game of the Year Edition (a PS4 exclusive). The PS4 Pro is 4K-capable and the only game console out there that offers VR support. View Deal

The PS4 Pro features 4K streaming and gaming supports and packs an overclocked 2.1 GHz CPU with beefed-up memory bandwidth. It delivers twice the performance power of the standard PS4.

In our PS4 Pro review, we loved its 4K gaming performance as well as its HDR and PSVR compatibility. While it doesn't support 4K Blu-ray discs, it compensates with 4K content streaming support.

Marvel's Spider-Man is a PS4 exclusive game that offers the ultimate Spidey experience in a vibrant open-world New York City.