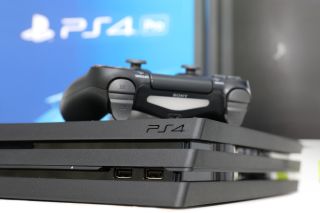 The demand for the Sony PS5 is so high that the logo reveal alone at CES 2020 created a big stir. Sony's new console is slated for a Holiday 2020 release, however, the beloved PS4 remains the best overall gaming console for the money. And the good news for bargain shoppers is that retailers are now offering some of the best PS4 deals we've ever seen. We're talking steep discounts on PS4 consoles, PS4 bundles, and the best PS4 games of the decade.

Right now, you can save up to 75% on digital PS4 games at the PlayStation Store.

The PS4 packs a host of entertainment features and exclusive PS4 games like God of War, Horizon Zero Dawn, and Editor's Choice titles, Marvel's Spider-Man and Uncharted 4: A Thief's End. As the only console with VR support, the PS4 has somewhat of an edge over the Xbox One and Nintendo Switch.

So if you're looking for the best PS4 deals online and in stores, you've come to the right place. We're scouring the Web for PS4 Slim and PS4 Pro price drops as well as deep discounts on the best PS4 games, gaming headsets, and best external storage drives. And make sure to follow our best gaming deals page for more gaming coverage.

PS4 deal of the week

In our PS4 review, we note how it's still the console to beat thanks to its catalog of excellent exclusives, tons of entertainment features, and VR support. And since it's the only gaming console with the latter, the PS4 has an edge over the Xbox One.

Not sure which system to get? Check out PS4 vs. Xbox One: Which Console Is Right for You?

The best PS4 deals tend to be bundles that include a free game or accessory. We've found that buying the console on its own tends to be pricier. Keep in mind that PS5 rumors are heating up, but that console will likely not see the light of day till late 2020.

The Sony PS4 Pro raises the bar for gaming consoles by delivering 4K gaming with a gorgeous injection of color, thanks to HDR. Simply put, if you own a 4K TV, this is the console that you want lying next to it.

The PS4's game library is packed with a range of titles so there's something for just about everyone. Retailers are currently offering some of the best PS4 game deals we've seen this month.

Borderlands 3 for PS4: was $59.99 now $24.99 @ Best Buy
Amazon has it on sale for the same price.
Borderlands 3 is a mayhem fueled thrill ride in which you are a one of four vault hunters. Own it now for $35 off its regular price.
View Deal

Days Gone: was $59.99 now $26 @ Amazon
Zombies, motorcycles and actor Sam Witter take Days Gone's decent framework and turn it into a surprisingly engaging sandbox experience. For $26, it's an experience worth picking up.View Deal

Call of Duty: Modern Warfare for PS4: was $59.99 now $34.99 @ Best Buy
In Call of Duty 4: Modern Warfare, players will experience an immersive narrative spanning the entire game. Get 3 Hours of 2XP when you buy it at Best Buy. The Xbox One version is also on sale for the same price. View Deal

Mortal Kombat 11 for PS4: was $59 now $29.99 @ Walmart
MK11 is the biggest, bloodiest, and best Mortal Kombat yet. This latest installment of the series features an overhauled fighting engine and an immersive story mode. Own it now for $30 off at Walmart. Amazon has it on sale for the same price. View Deal

Cyberpunk 2077 for PS4 Preorder: was $59 now $49.94 @ Walmart
This open-world, action-adventure game is set in Night City, a bleak megalopolis obsessed with power and glamour. Save $10 when you preorder now before its April 16, 2020 release date. View Deal

Need a spare controller or wireless gaming headset? Here are the best PS4 accessory deals you can get right now.

Sony PS4 Camera: was $59.99 now $40.49 @ Amazon
This camera lets you automatically log onto your account and navigate your PS4 via voice control.

Seagate 2TB External HD: was $69.99 now $59.99 @ Amazon
With a storage capacity of 2TB, the Seagate external drive gives you extra leg room so you can download games with peace of mind. For a limited time, it's $10 cheaper than its regular retail price. View Deal