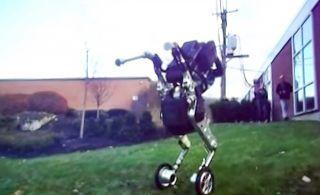 A video recently published on YouTube reveals a robot that can roll around quickly on two wheels, turn 360 degrees on a dime and easily bend down to about half its height. This makes it an ideal robot for lifting heavy packages and moving them around faster than a human might, with surprising stability.

Boston Dynamics, which is known for developing robots with legs, says the wheeled robot is much more efficient than a legged robot as well, according to Boston Dynamics founder Marc Raibert.

Last year, the company's watchers speculated that its legged robots would deliver packages to home and businesses instead of mail carriers and even drones.