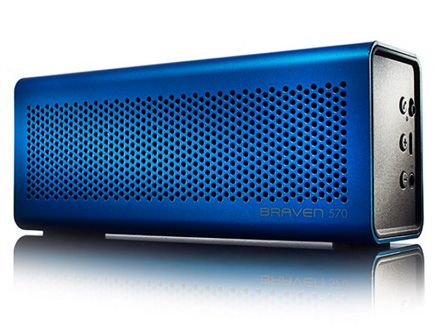 The Braven 570 Bluetooth speaker packs in a ton of features and delivers decent audio performance at an affordable price.

As the novelty wears off of portable Bluetooth speakers, price becomes as important as performance. We're seeing more affordable models that can do more than just play music — one of those is the Braven 570. Available for just $59 online ($99 MSRP), this small wireless speaker offers handy features, including a speakerphone and the ability to charge a mobile device. It sounds pretty good, too, though other slightly more expensive models beat the Braven's audio quality.

Measuring 6.25 x 2.5 x 1.75 inches, the rectangular Braven 570 is both small and light. Weighing just 11 ounces, it's 2 ounces lighter than JBL's $100 Flip 2 ($99.95). While we tested a red model, you can choose from five other colors: green, purple, white, blue and black. The plastic covering feels slightly flimsy compared to the metal or hard rubber that many portable Bluetooth players use to protect the drivers (including Braven's 670 and 750 series), but that's the trade-off for knocking off a few ounces.

Braven put the buttons and ports on the sides of the speaker — and the company didn't leave much out. On the right side, you'll find the power switch, volume controls, a microUSB port for charging the battery, and a 3.5mm port for a wired connection to a computer, mobile device or other audio source. The right also features a button to answer calls. That's a lot of buttons and ports for a small space, and we found they required some dexterity.

In addition to the buttons, Braven put a status indicator light below the call button, which blinks to indicate it's connected to a Bluetooth source. Unfortunately, the blinking is an unnecessary distraction, especially in low-light situations.

On the left side, the 570 includes a USB port that turns the speaker into a battery backup for a mobile device. If the 570 has a full battery, you can charge your smartphone to about 30 to 40 percent from zero, but the speaker doesn't produce enough power to charge a tablet.

The 570 doesn't include any weatherproofing, such as waterproofing or shock resistance, so you'll do best to keep it far from the pool.

The Braven 570 paired quickly with our iOS and Android devices. To put the speaker into discovery mode, hold the call button on the right side of the 570 until you see a flashing light and hear a repeating tone.

On an Android device, go to Settings and look for the speaker listed in Available Devices. (You may need to touch Search for Devices.) In iOS, go to Settings > Bluetooth, where the Braven 570 should appear under Devices.

Braven claims a wireless range of 30 feet for the 570, and we found that it maintained a strong connection from at least as far as 25 feet away with a clear line of sight. That's on a par with most portable Bluetooth speakers.

The Braven 570 delivers average audio performance for models in its price range. With 6 watts per driver (the same as the Flip 2), the 570 can get loud for a small speaker. At high volumes, it will distort a bit— and you shouldn't expect the audio to fill a large room — but the 570 provides plenty of volume for most situations.

Like similar speakers, the 570 is best at delivering midrange tones, such as Lorde's vocals on "Team" or the saxophones on Charles Mingus' jazz classic "Goodbye Pork Pie Hat."

However, the 570 falls short in bass response.The deep lows on St. Vincent's "Digital Witness" were mostly absent, while the rumble breakdown on the Beastie Boys' "Shake Your Rump" lacked the desired effect. Symphonic pieces, such as Mendelssohn's overture to "A Midsummer Night's Dream" sounded thin, as the strings lacked resonance. In this price range, the Flip 2 outperformed the 570, thanks to its slightly more robust bass.

To improve sound performance, you can connect two 570s through the line-out port and a 3.5mm cable — basically doubling the sound experience. This creates a wider soundscape, which makes the music sound fuller. But if you're willing to spend more than $100, there are plenty of great stand-alone options, such as the $199 Fugoo Style.

The Braven 570's speakerphone delivered clear quality on both ends of calls —it sounded about the same as the iPhone's built-in speakerphone when held at arm's length. You can answer or end a call directly from the call button on the right side of the speaker.

The speakerphone is a great bonus for this model, since several more expensive portable Bluetooth speakers, such as JBL's Pulse and Bose's SoundLink Mini, cost twice as much and don't come with the feature.

Braven says the 570 can play for 10 hours on a full charge, and we found that to be accurate during testing. That's about twice what the JBL Flip 2 delivers, though far less than the 40 hours of the Fugoo Style. You can recharge the 570's battery through the microUSB port on the right side.

To see the battery level, push the battery button on the right side. If the indicator is white, then you have 50 or more percent left; blue means 10 to 50 percent; and red indicates less than 10 percent. The speaker will also beep when the battery life falls below 10 percent.

If you're seeking an affordable portable Bluetooth speaker that is packed with features, the Braven 570 is a very good choice. Although the audio quality isn't as strong as that of the JBL Flip 2, Braven's speaker offers twice the endurance, a speakerphone and the ability to serve as a battery backup for a mobile device.