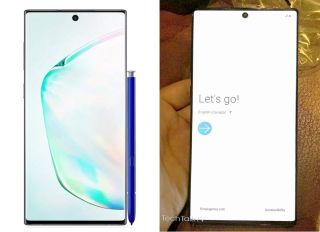 We have seen the renders of the Samsung Galaxy Note 10+, but here’s the very first and only photo of the device, which looks as good as its publicity shots. Those bezels are impressively thin.

The selfie camera looks smaller than the one in the Galaxy S10 too, but that may be an effect of the phone’s proportions.

Posted by TechTalkTV and confirmed as real by Ice Universe — the most reliable Samsung leaker — the photo shows exactly what we have seen in the renders: extremely thin bezels and a relatively small centered selfie camera hole.

Usually, rendered images of unreleased phones tend to exaggerate the thinness of the bezels and the size of the frontal cameras. This time, however, the synthetic images match the real thing.

The Samsung Galaxy Note 10+ shown in the image should have the same processor but will bump all the specs: 12GB of RAM to start, 6.8-inch 3,040 x 1,440-pixel AMOLED display, an additional Time-of-Flight sensor for 3D imaging on the back, and a 4,300mAh battery. There will also be a model with 5G connectivity called the Galaxy Note 10+ 5G.

The Samsung Galaxy Note 10 line will launch on August 7. Check out our frequently updated Galaxy Note 10 hub to get up to speed on all of the latest news, rumors and leaks.