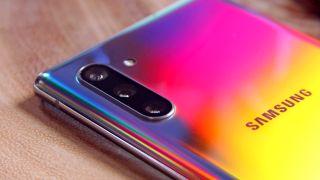 Fortunately, retailers from Walmart to Samsung are offering Galaxy Note 10 deals to help ease the burden on your wallet. That means there's absolutely no reason you should pay full price for your Note 10.

As always, the biggest discounts apply if you have an old smartphone to trade in or if you plan on jumping to a new carrier, so keep that in mind as you shop for the best Galaxy Note 10 deals.

Currently, our favorite Note 10 deals are stemming from Samsung. The manufacturer is bundling freebies like the Silver Galaxy Buds ($240 value) with the purchase of an unlocked Note 10.

At 6.3 inches, the Galaxy Note 10 has a slightly smaller screen than the 6.4-inch Galaxy Note 9 it replaces. However, the Note 10 is noticeably thinner and lighter weighing in at 5.9 ounces versus the Note 9's whopping 7.1 ounces. In fact, it might be one of the most compact phablets ever.

There are some trade-offs though. For instance, you lose the headphone jack and microSD card slot (although the Note 10 Plus keeps the memory card slot).

Like Samsung's other recent premium phones, the Note 10 has an ultrasonic fingerprint sensor baked into the display. It uses the same camera sensors on the Galaxy Note 10 as on the Galaxy S10, which means you shouldn't expect a leap in performance when taking still shots. Performance-wise, it offers impressive, but not record-breaking results. It's battery also lasted for just 9 hours and 25 minutes, which is below the smartphone average of 10:14.

If you can't decide between both models, make sure to check out our Note 10 vs. Note 10 Plus comparison to find out which phone is right for you. Otherwise, here are the best Note 10 deals you can get right now.

The Galaxy Note 10 Plus packs a ginormous 6.8-inch screen, more RAM, and more storage space. It's definitely a two-hands-required kind of device, but it's a stylish one. It also adds a fourth camera lens, which Samsung calls its DepthVision Camera, which helps the Note 10 Plus ascertain a better understanding of physical space in certain shooting modes — like when capturing a shallow depth-of-field Live Focus portrait, for example.

It sports a huge 4,300 mAh battery, which allows the Note 10 Plus to last an average of 11 hours and 9 minutes on our web surfing battery test, which is excellent.

With its four camera sensors, the Galaxy Note 10 Plus is an upgrade over the Galaxy Note 9's two cameras. The back of the Note 10 Plus houses a wide-angle camera and telephoto lens like its predecessor, but adds an ultrawide shooter to fit in more of the frame and a depth sensor to achieve more convincing bokeh effects when shooting portraits.