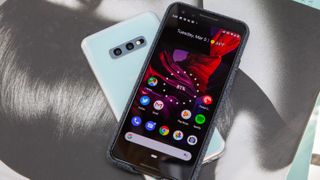 Samsung has been rumored for months to be working on a new, budget friendly Galaxy S10 Lite. But the company has remained tight-lipped about that—until now.

In a surprising leak this week, the Federal Communications Commission (FCC) leaked a Samsung filing pointing to the model number SM-G770F. More importantly, in the leak, which was earlier reported on by SamMobile, in the "About phone" section of the leak, it specifically says the handset is called the Galaxy S10 Lite.

Rumors have been swirling that Samsung is working on a Galaxy S10 Lite that could launch alongside the company's lineup of Galaxy S11 devices next year. Reports have suggested that the device could have a high-end Qualcomm Snapdragon 855 processor and a design reminiscent of this year's Galaxy S10 lineup, including a 6.7-inch screen. However, all signs point to it offering a far more budget-friendly price than the Galaxy S11 lineup Samsung has slated for early 2020.

Earlier this year, Samsung released what it called a budget-friendly model called the Galaxy S10e. That device ditched the in-screen fingerprint sensor found on the regular Galaxy S10 in favor of a sensor placed on the side of the handset. And it had a smaller display at 5.8 inches versus 6.1 inches.

Why Samsung would use the Galaxy S10 branding in a new device it'll launch next year is unknown. And to be clear, it's possible that the company will change the name on the handset between now and then. But Samsung is clearly eyeing ways to attract shoppers who are on a budget and don't necessarily want the latest and greatest smartphone.

Exactly when the handset could hit store shelves, however, is unknown. Considering it's been filed with the FCC, there's reason to believe it could launch sooner rather than later. But since reports suggest the S10 Lite will be available alongside next year's Galaxy S11, there's a good chance that we'll see it at some point in the first couple months of 2020.

Check out our Galaxy S11 rumor hub to see all the latest news and leaks around Samsung's next flagship.