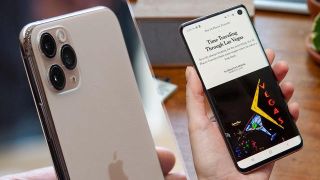 Apple's trio of flagship iPhones has put Samsung’s Galaxy S10 devices on defense. The companies’ two mid-sized options, the 5.8-inch iPhone 11 Pro and 6.1-inch Galaxy S10, may be the middle children of their respective families, but both have plenty to offer when it comes to design, display, cameras, performance and battery life.

The iPhone 11 Pro, which measures 5.7 inches tall and 2.8 inches wide, fits more comfortably in petite hands than the 5.9-inch-tall Galaxy S10. Like other recent Apple phones, the Pro also has a notch, making its 5.8-inch display easier to navigate with one hand than the S10’s 6.1-inch screen. (More on that display in a minute.)

Size matters, but when it comes to style, Apple and Samsung have taken wildly different approaches to smartphone design. Both flagships sport triple-camera arrays on the back, but Apple grouped its telephoto, wide-angle and ultra-wide-angle lenses in a triangular formation within a square bump. The effect has polarized the internet, and even caused physical revulsion in folks with trypophobia. Samsung took a more conventional approach with its camera layout, centering its lenses in a horizontal array.

The two phones also diverge when it comes to colors. The iPhone 11 Pro has a more matte finish than the ultra-glossy Galaxy S10, which makes it more resistant to fingerprint smudges. The iPhone’s range of hues, which includes a new (for Apple) Midnight Green in addition to the classic gold, space gray and silver, are more tame than Samsung’s. The Galaxy S10 comes in an ultra-bright Flamingo Pink, prismatic white and black, and a brilliant blue. It’s definitely the flashier of the two flagships.

Which is more aesthetically pleasing? Well, that depends on your taste. And whether you’re scared of holes placed in groups of three. Sorry, trypophobes.

Apple transformed the back of its latest iPhones, but from the front, it’s business as usual. The iPhone 11 Pro’s display looks identical to the iPhone X and iPhone XS: a 5.8-inch OLED panel with a notch swooping down from the top to disguise the front-facing camera. The 2436 x 1125 screen resolution is also unchanged from the iPhone X, released in 2017.

Samsung went bold with the Galaxy S10, designing what the company calls an Infinity-O display: an expansive, gorgeous, incredibly high-res (3040 x 1440), almost bezel-free screen. Samsung’s solution for the front-facing camera is a cut-out stamped directly in the OLED panel, which isn’t the most elegant solution, but leaves more room than the iPhone 11 Pro allows for videos, photos, games and web-browsing.

Rumor has it Apple is eyeing a display redesign for the 2020 iPhone, but this year, Samsung’s Galaxy S10 has the screen to beat, at least until we get the chance to view them side by side.

Every year, Apple designs a more advanced processor for the iPhone. This year, it’s the A13 Bionic, which the company says delivers 20% faster CPU and GPU performance.

That’s bad news for Samsung. The A12 Bionic in last year’s iPhones easily outperforms the Qualcomm Snapdragon 855 chip in many of this year’s Android flagships, including the Galaxy S10. The A13 positively blows it away.

Both the iPhone and the Galaxy have a trio of rear-facing lenses: a wide, ultra-wide and telephoto lens for dynamic landscapes and detailed portraits. On paper, the S10’s lenses sound slightly more advanced, because both the wide- and ultra-wide-angle have 16 megapixels. The iPhone 11 Pro’s wide- and ultra-wide-angle lenses are 12-MP by comparison. The S10’s main lens also features a variable aperture, shifting to a wider aperture when you need to let in more light to enhance a shot.

But underneath the hood, the iPhone’s A13 processor powers a whole host of photography features that could propel it ahead of even Google’s Pixel 3. The 11 Pro’s camera has an automatic Night Mode for better low-light shots, shoots 4K video, and later this year will be able to create the best possible photo using machine learning, or what Apple calls Deep Fusion, by stitching together nine images into one.

The Galaxy S10 takes solid photos with its trio of lenses. Its 10-MP front-facing lens also takes good selfies, though the placement of the camera is a bit awkward. Samsung wanted to make thecamera’s  cut-out unobtrusive by putting it to the top right of the display, so you have to retrain yourself to look up and to the right instead of directly in the center.

The iPhone 11 Pro’s 12-MP front-facing camera has a new trick: It shoots slow-motion front-facing videos, or what Apple calls “slofies,” which could either turn out to be a gimmick or become a go-to for Instagrammers.

The iPhone's Night Mode churns out photos that rival Google’s excellent AI-assisted images. If excellent low-light images are your highest priority, the 11 Pro is the phone to beat.

We'll test the iPhone's cameras again when Deep Fusion rolls out in a software update later this fall. Those improvements will only widen the disparity between the 11 Pro and the S10.

Apple says the iPhone 11 Pro lasts four hours longer than last year’s iPhone XS, a claim based on the company’s tests of talk time and video playback. We put the new iPhone through its paces with the Tom’s Guide Battery Test, continuous web-surfing over LTE, and its 10:23 battery life bests the iPhone XS, which lasted a below-average 9 hours and 41 minutes. To compare, the Galaxy S10’s 3,400 mAh battery pack lasted 10:19 in our testing.

The Galaxy S10 has a battery feature the iPhone 11 Pro lacks: reverse wireless charging, which lets S10 owners charge up other Qi-compatible devices simply by placing them on the back of their smartphone. The iPhone was rumored to be gaining that feature this year, but it didn’t happen.

At least the iPhone now matches the Galaxy S10 in another area, as the Pro model phones include a fast-charger in the box. The 18-watt charger juiced up the iPhone 11 Pro a 55% charge after 30 minutes.

It's not hard to find either phone, with both the new iPhone and the S10 widely available from carriers and retailers. It’s also just as easy to spot a disparity in price between the two handsets.

Texts:
Nationwide & International Text to over 200 countries in the world
View Deal
at
Verizon Wireless
We check over 130 million products every day for the best prices
View All Deals
powered by

You should be on the lookout for both iPhone 11 deals as well as Galaxy S10 deals before you buy, but the S10's lower price tag and more ample storage — at 128GB, it comes with double the storage on the iPhone 11 Pro — give it the edge here.