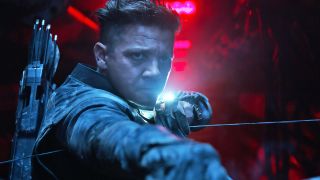 In the aftermath of Avengers: Endgame, many of Marvel's superheroes were rewarded with their own follow-up project in Phase 4 of the MCU. Hawkeye, for example, is coming to your TV in a Disney Plus show, simply titled Hawkeye.

You know about spoilers, kids? Well, this article is packing more than a few post-Endgame tidbits.

While the show will star the Hawkeye we know, expect the series to focus on a new Hawkeye. What necessitates this change? We're guessing Clint Barton is ready to hang up his bow and arrow after the events of Endgame.

The other shows in the Disney Plus Phase 4 run include The Falcon and The Winter Soldier, WandaVision, Loki, What If...?, Ms. Marvel, Moon Knight and She Hulk.

Hawkeye show release date: when is it coming out?

While rumors of a Hawkeye show shot through comics and movies news sites for a while, we got true confirmation at San Diego Comic-Con 2019. Marvel exec Kevin Feige placed Hawkeye near the end of the Phase 4 lineup, revealing that it's scheduled for the fall of 2021. The What If...? animated show will bow in the MCU slot prior to Hawkeye, and Thor 4: Love and Thunder hits theaters afterward.

Looking to get Disney Plus before Hawkeye shoots onto the service? We're tracking Disney Plus deals, including Verizon's free year offer.

Hawkeye TV show cast and crew: who's in it?

Variety reports that Hailee Steinfeld, the voice of Spider-Gwen in Spider-Man: Into the Spider-Verse, may be in the running to play Kate Bishop. In the critically-beloved Matt Fraction run of the Hawkeye comic book, Barton and Bishop both don the Hawkeye moniker, with Barton mentoring the younger Hawkeye.

Jonathan Igla (Mad Men), will write the Hawkeye show, according to The Hollywood Reporter.

What have we seen or learned about Hawkeye's plot?

An early report from Variety tipped us off to the Hawkeye plot. Hawkeye is said to focus on Clint Barton training Kate Bishop to replace him in the role of Hawkeye.