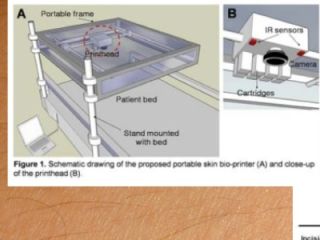 Try not to think of some chilling nightmare of failed human experimentation. Instead, think back to that crazy late 90's film, Fifth Element. An early scene features a device that literally re-fabricates Milla Jovovich from nothing more than a charred hand. That's exactly what this device is supposed to do. Well, maybe not exactly. So far it can only print out skin cells, not entire bodies. Still, it's a step in the right direction.

Researchers at Wake Forest Institute for Regenerative Medicine presented the results from their bio-printer at a recent annual Clinical Congress of the American College of Surgeons. It uses the same inkjet technology found in standard color printers to lay down a mix of skin cells and coagulants. A second layer of cells, called keratinocytes, is added to form the outer skin.

So far, tests on mice have shown wounds heal a lot faster when printed with a fresh coat of skin. The next round of testing will use pigs. They're great human analogues, as many a jilted girlfriend can tell you. Hopefully, we can start printing out Milla Jovoviches in the very near future.