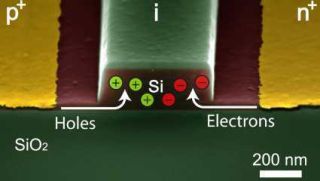 The silicon-based MZEOM is a device which has both a laser source input and electrical signal input. The electrical input signal is used to instruct the MZEOM when to switch the laser on and off. The laser itself is carried through something called a silicon nano-photonic waveguide, like an on-die fiber optic wires which connects two points both terminated by MZEOMs. The signal is modulated as required by the on-die circuitry, sending data to its destination. By using light, instead of electricity, not only can much more data be communicated, but with a fraction of the energy cost and generated heat.

According to IBM, the new technology "significantly reduces [manufacturing] cost [and therefore end-user cost], energy consumption and heat while increasing communications bandwidth between the cores more than 100x over wired chips." IBM has big plans for the technology. According to their press release, "The new technology aims to connect 100s, even 1000s of processor cores together on a single chip that would have the power of today’s large supercomputers."