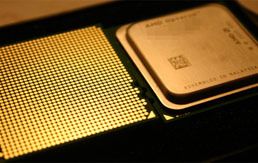 Shanghai (China) - AMD is currently preparing its presentations for the company’s annual stockholder meeting next week and we hear that the company will let us know that more than 1 million quad-core CPUs have been shipped. Not all of these processors, however, are sold for the official tray price. Some are going for as little as $1 a pop and in this particular, even that is not enough to keep certain customers happy.

We came across this juicy bit of information after talking to some of our sources in the Asia-Pacific region and it appears that AMD is currently caught in a supercomputer SNAFU with the Chinese government.

Supercomputers aren’t just a matter of pure processing horsepower, they are also a matter of national pride. There’s a crazy global rush to make the spring and fall top-500 supercomputer lists and it appears that China was aiming to upgrade its Shanghai Supercomputer Center (SSC), currently listed at position #250, to overtake the Tata Sons system from India at #4: While the Indian System has a sustained performance rating of 117.9 TFlops (driven by 3560 3 GHz, quad-core Xeon 5300 CPUs), the Shanghai Supercomputer Center stands at 8.1 TFlops (using 1280 2.2 GHz dual-core Opteron processors).

China decided to upgrade its Dawning 4000A racks and made a massive order for an undisclosed number of 2.3 GHz quad-core Opteron processors (Barcelona) to break the 200 TFlops peak performance barrier (the Tata system has a peak performance of 170.9 TFlops). AMD gave these processors away for $1 a piece (don’t feel too bad, if you have paid more, Intel apparently does that all the time as well and even gave away free Itanium 2 processors to get a F1 supercomputer deal).

We don’t know how many processors were shipped, but we do know that the guys at the SSC were somewhat surprised to find that they received 1.9 GHz and not the 2.3 GHz CPUs they were expecting - which meant that they would miss the targeted performance goal for the upgraded system. Our sources indicate that AMD APAC was expected to pay for all the additional racks that the SSC needed to reach the target and, additionally, AMD spent more than $1 million on lab facilities, which could be considered some sort of compensation for the miss.

You may wonder how the SSC came up with the additional space for those extra racks. Well, they did not. At this time, we hear, SSC, Dawning and AMD are scrambling to elevate the system to the initially targeted performance. Will they be able to reach that goal and can China surpass India? We will all know when the June 2008 Top-500 list is revealed.