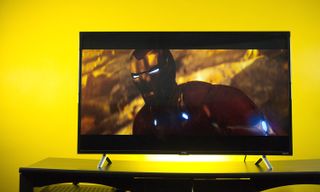 With Memorial Day, the World Cup, and Father's Day less than a month away, retailers are scrambling for your attention by offering TV sales that are above and beyond anything we're used to seeing at this time of year. And the good news is, this might be the tip of the deal iceberg.

Our personal favorite TV deal of the moment is this LG 49-inch 4K Smart HDTV w/ HDR for $299.99 after coupon "EMCSPUEW4" and this $30 mail-in rebate. (Act quick because this deal ends May 19 at 3am ET). This type of price is normally reserved for off-brand models, so to see a TV from a name-brand manufacturer at this price point is rare — especially for the month of May. But like we said, the World Cup is just around the corner and that's undoubtedly sparking fire sales across retailers nationwide.

So what other TV deals are hot?

If you want to buy something under the $500 mark, Best Buy has a wide selection of sub-$500 4K HDTVs. It's Insignia 55-inch 4K Smart Roku TV is hard to beat at $399.99. It's picture quality was excellent in our tests, but keep in mind it had poor contrast, so this isn't the right set for the videophile who wants top performance for the price.

That distinction goes to TCL with its 6 Series and S Series lineup, which wowed us in our labs and offered the type of performance you'd expect from TVs twice their price. The entire S Series is on sale right now at Amazon. The retailer is taking from $80 to $200 off the 43-inch, 49-inch, 55-inch, and 65-inch models. At $399.99, the 55-inch set represents the best value and it's only $50 more than the 49-inch set.

Here's some good news. These TV deals are likely to get better as we get closer to the World Cup. Memorial Day sales have already started and pretty soon you'll begin seeing Father's Day sales. And let's not forget Prime Day in July, which along with Amazon and Best Buy's TV partnership could make for an excellent summer for TV deals.