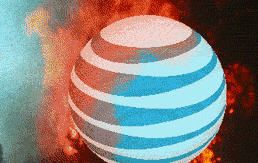 AT&T is still feeling the sting from Verizon's, 'There's A Map for That' ad campaign. Last week the company was refused a restraining order that would prevent Verizon from showing its commercials until the matter was resolved in court. Shortly afterward, the company released a new commercial highlighting why AT&T's '3G experience' was superior to what Verizon had to offer.

This week, we've got three new commercials from AT&T, one of which tries to "set the record straight" about the maps Verizon has been talking about. As you can imagine, this involves AT&T highlighting all of its coverage, rather than just the 3G. However, it seems AT&T is done pimping its 2G and GPRS coverage, as the company makes no mention of specific types of network. Instead, Luke Wilson just refers to AT&T "covering" 97 percent of the country.

Check out the ads and let us know what you think. Also, Luke Wilson is a bit of an odd choice. Who would you like to see on these commercials?