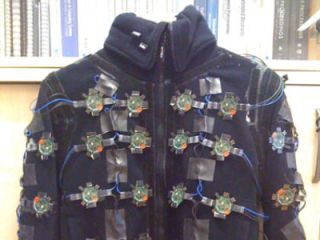 Nope, it's not some guy's lame attempt at a Christmas tree Halloween costume. Nor is it one of Macgyver's little impromptu kit-bashes. Each of those tacky looking widgets embedded on a jacket is actually a processing node, called a Luminet module. Here's a close up:

Yes, this jacket is a computer. Jan Borchers and René Bohne developed the LumiNet system as an answer to wearable tech's current muse, the Lilypad Arduino. Unlike the Lilypad, Luminet modules are networked in a decentralized fashion. So if one chip goes bust, the rest can take up the slack. Instructions are received by a single node, and then spread to the rest of the network. Borchers and Bohne like to call this "programming by infection."

We're assuming that this model is just a proof of concept, so I guess we can excuse the DIY duct-taped look for now. Hopefully later models will integrate the circuitry into the clothing material itself, so that you don't have to worry about getting electrocuted at the slightest chance of rain.