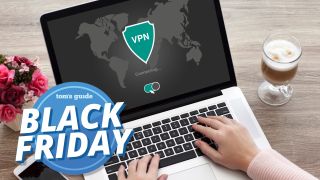 Worried that your Internet service provider is keeping track of your browsing habits? Do you often go online from airports and hotels? Have a hankering for foreign TV shows? Then you may want to consider one of our best VPN services, especially with Black Friday deals in full swing.

We've combed the internet for the best VPN Black Friday deals and come up with what's below. All offer unlimited access to VPN servers in many countries from five or seven devices simultaneously.

Mind you, many VPN services don't offer any Black Friday sales at all, so you won't get the full range of available providers. But we're perfectly comfortable recommending TunnelBear, CyberGhost, ProtonVPN, Norton Secure VPN, IPVanish or VyprVPN.

Norton Secure VPN 1-year plan: Was $80, now $29.99
Norton's VPN service, provided by its subsidiary SurfEasy, was already one of the best bargains among consumer VPN services. This $30 deal for five devices is a no-brainer.View Deal

CyberGhost 1-year subscription: Was $66, now $33
Romanian-German VPN provider lets you connect up to 7 devices at once, does a good job of letting you stream Netflix from overseas and has a bright, user-friendly interface.View Deal

Windscribe 1-year subscription: Was $49, now $39
One of our favorite VPN providers is offering 20% off its yearly plan for Black Friday. Toronto-based Windscribe is fast, easy to use and terrific at streaming overseas video.View Deal

IPVanish 1-year subscription: Was $80, now $39
One of our top-rated VPN services, IPVanish is slashing all its plans by about half for Black Friday and Cyber Monday. One month is $5 instead of $12 and three months is $4.50 instead of $9, but as the old pricing reverts after the first billing, you'll want to go for the full-year deal.View Deal

TunnelBear 1-year subscription: Was $60, now $49.99
The most user-friendly VPN service is known for its Black Friday sales, and this year's no exception. TunnelBear doesn't try to evade Netflix blocks, but is otherwise thoroughly reliable and reachable.View Deal

ProtonVPN Plus 1-year subscription: Was $96, now $79.99
Swiss-based ProtonVPN is a sibling to encrypted-mail provider ProtonMail, houses servers in a Cold War fallout shelter and routes traffic through countries with strong privacy laws. Its Plus plan lets five devices connect at once.View Deal

VyprVPN Premium 1-year subscription: Was $80, now $45
For Black Friday, VyprVPN is slashing the price for its 1-year Premium plan, which lets you connect up to five devices at once and use Vypr's own Chameleon privacy protocol. View Deal