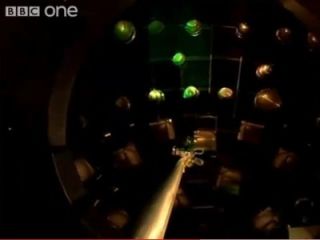 At the National Ignition Facility in California, people are thinking big. How big you might ask? Well, they took 192 of the world's most powerful lasers, and rigged them to focus their beams into one massive, 500 terawatt blast.

Before you go celebrating the death of America's enemies, calm down. This super laser isn't part of some secret weapons program designed to rain photonic death upon America's enemies; instead, it will be aimed at another problem entirely: that of nuclear fusion.

For those of you who are wondering, yes, that's the kind of nuclear explosion found at the heart of stars. It gets one to thinking: the LHC creating Mini-big bangs? CERN collecting highly explosive antimatter? Now a mini-star right smack dab in Livermore, California? No wonder the average Joe thinks science will be the death of us.