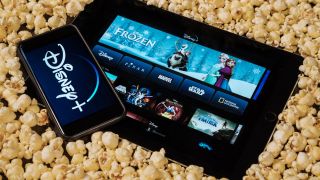 We've known that Disney Plus isn't going to fill its streaming movies and shows with ads, but news just broke that the sign-up processes will end with one. For the Starz networks, of all things. The relatively good news, though, is that it's for a good cause: entertainment.

A report from The Verge cites a Disney spokesperson who said that the ad playing after the signup process is over is tied to a licensing deal with Starz, where the goal is to make the Disney Plus launch library more complete.

The biggest title in this deal appears to be 2015's Star Wars: The Force Awakens, which was licensed to Starz in 2017. This is one of a handful of similar stories of regaining sold-rights, as Disney also has movies still on Netflix, such as Coco and Ralph Breaks The Internet.

Hopefully this is a one-time only deal, and something that people can ignore during the initial setup process. You know, like the wall of legalese you click past every time you updated iTunes (RIP).

Disney Plus launches next Tuesday, Nov. 12, bringing more movies and TV shows than you'll have time to watch — even with some titles still lost-at-digital-sea.

We've already watched two titles coming to the platform. Our Lady and The Tramp review noted it's "just an inoffensive remake meant for casual family viewing," while our High School Musical: The Musical: The Series review stated it's "shaping up to be one of the best Disney Plus shows."