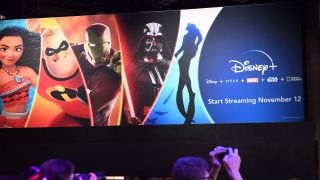 As I watched all of the Disney Plus (also styled as Disney+) news come in from the D23 Expo — a new Obi-Wan Kenobi show! She Hulk, Ms. Marvel and Moon Knight joining the MCU Phase 4 lineup on Disney Plus! Even Lizzie McGuire is back! — I started to wonder how Apple TV Plus, the other new kid about to move in to the streaming block, can survive.

While Apple TV Plus hit screens earlier, we know so much more about Disney’s service (early testing reports are good). Meanwhile, Apple has released a few trailers, and none are sending us searching for our credit cards. Here's how the upcoming Disney Plus vs Apple TV Plus battle is shaping up.

Read our full Apple TV Plus review for an in-depth look at the shows and Apple's device support.

Price: Apple TV Plus slides under Disney Plus

Disney+ announced pricing so low that practically everyone will have trouble competing: $6.99 per month. Oh, and that rate includes four simultaneous streams plus UHD resolution and HDR. If you want to subscribe before it opens, check out our guide for how to pre-order Disney Plus.

Households ready to commit to Disney Plus get a bigger perk: annual pricing of $69.99 per year — a nice price that cuts $13.89 off your bottom line.

Apple, though, responded with a surprisingly low rate of $4.99 per month, which is $2 less per month than Disney's fee. You'll even get a free year of the service if you buy a new piece of Apple hardware, such as the iPhone, iPad and Mac.

Release date: Who will launch first?

Disney's announced first, placing Disney Plus for Nov. 12, and Apple waited a little bit to reveal its launch date.

Apple TV Plus launched on Nov. 1 and while the launch list of Apple TV Plus shows and movies might feel sparse (Disney Plus is also only launching with 9 originals), it does have something for everyone. Apple also gives users a free 7-day trial, so early adopters may drop out before Disney+ even starts streaming.

At launch, Disney+ will be stacked to the gills with movies that have been hard to find and shows we've all loved for years. That starts with retro classics like Sleeping Beauty, Snow White and the Seven Dwarfs and Steamboat Willie, and includes more recent favorites such as Star Wars: The Clone Wars series and the beloved A Goofy Movie.

In contrast, the list of Apple TV Plus shows and movies is heavy on new originals and light on characters you already know and love. I'll get to those shows in a minute, but for Apple to possibly charge more — and not have anything to match Disney's back catalog — will put a heavy burden of expectation on the quality of its original programming.

The biggest pre-existing intellectual properties in Apple's slate are kids' shows: Snoopy and Sesame Street are bringing programming to Apple TV Plus.

Disney Plus' biggest launch title will be The Mandalorian, which will see showrunner Jon Favreau chart a new course in the Star Wars Universe. Favreau described the show as taking place between "the fall of the Empire" and "the emergence of the First Order."

The show's first trailer highlights the seedier aspects of The Mandalorian (which will star Pedro Pascal as the titular character), revealing more of the show’s grimy crime underbelly. So, basically take the interactions at Jabba's Palace and turn them up to HBO levels, if we're lucky.

The other big shows on Disney's day-one list are appealing to the nostalgic sides of younger audiences (High School Musical) and the inner zany weirdo in all of us (The World According to Jeff Goldblum). And over the next few years, Disney Plus will have eight Marvel Phase 4 TV shows, with big names like The Falcon and Winter Soldier, She-Hulk, Hawkeye and Loki. That's a lot of must-see content for existing fans.

Meanwhile, Apple's relying on entirely new fables to capture our attention. Its launch list, according to Bloomberg, is expected to include at least these five shows: The Morning Show, Steven Spielberg's Amazing Stories, See, Truth Be Told and Home.

Going through the casts of those shows, you see a lot of star power. For example, Steve Carell and Jennifer Aniston headline The Morning Show. Unfortunately, the early tastes of said Show aren't that flavorful, as its first full trailer shows us angry cable talk show hosts in disrepair and scandal. You can judge for yourself:

The star-studded casts continue with See (Jason Momoa) and Truth Be Told (Octavia Spencer), but since those are entirely original IP, Apple's relying on trust to earn attention. While Spielberg's name evokes a lot of nostalgia, Amazing Stories is a rebooted anthology show, which means we're not going into it wondering about specific characters.

The first trailer for See didn't do much for our office either. We're already poking holes in its logic, wondering about how a society of blind people can tell that their newborn babies can see, or how they're so well dressed without the ability to look in a mirror.

Availability: Only one is coming to Amazon Fire TV

Expect Apple TV Plus on every device with Apple's TV app, and then some. That means iPhones, iPads, Apple TVs, MacBooks and iMacs. Even third-party Smart TVs from LG, Vizio and Sony — starting with the Samsung Q90 QLED TV — are getting the Apple TV app. The Apple TV app will even arrive on Roku and Amazon Fire TV.

Meanwhile, Disney+ is launching on Roku, Chromecast, iPhone, iPad, iPod touch, Apple TV and Android-based Sony Smart TVs. It's also arriving on Android phones, Android TV, Microsoft Xbox One and Sony PlayStation 4, which aren't going to get Apple TV Plus. However, the supported device list for Disney+ doesn't include Amazon Fire TV, which is a huge omission that could get corrected before Nov. 12.

Right now, it looks like Disney Plus will dominate the conversation in November, even though Apple's recent announcements gave it some headway. Now it's coming first and costing less, but what good are those edges when you haven't grabbed the public with a must-see show? Disney’s service is still cheap at $6.99 per month, and it also packs a back catalog that Apple doesn't have and a murderer's row of characters that many of us care about.

For Apple to get a win here, it's going to need See or The Morning Show to be the next Game of Thrones or Mad Men. Reports claim that Apple has invested $6 billion (so far) into its shows, so I guess we'll find out if money can buy hits.