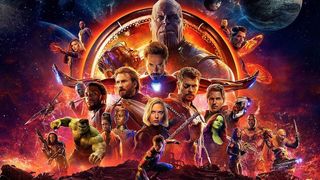 Now that most of the best Marvel Movies are on Disney Plus, you can binge watch most of your favorite heroes all you want. But Disney Plus doesn't have everything, and it's not the only way to watch the MCU. So, if you're trying to to catch up, we've got a complete guide that puts the Marvel movies in order, from Iron Man's first flight to Spider-Man's latest adventure.

MARVEL MOVIES IN ORDER | ON DISNEY PLUS?

Grizzled veterans of the Infinity Saga might find more value in our list that organizes Marvel movies in order of the events that take place in the films. Flashbacks might complicate this, but it's not that complicated.

Arguably the biggest Netflix competitor to date and the new home for many new forthcoming Marvel shows, Disney Plus launched with 16 Marvel movies, including Avengers, Captain America: The Winter Soldier and Avengers: Endgame.

If you’re looking to jump into the sea of spandex, swords and Vibranium shields just now, that’s an overwhelming amount of existing media to parse through before even thinking about the future of Marvel content. Heck, even if you’re a casual or hardcore fan looking to do a rewatch, that’s overwhelming. So, like Avengers ourselves, we’ve assembled the 23 films that comprise the MCU Infinity Saga into a few handy lists so you can watch the Marvel movies in order, no matter your level of fandom.

We've also got dates for when two of the remaining MCU movies will actually arrive on Disney Plus. And about those three that we don't have release dates for, we've got details on why we're not holding our breath for them to arrive on the streaming service.

If you’ve seen most or all of the movies (or are like that guy who saw Endgame in theaters 116 times) and you want to switch things up a bit, chronologically rewatching the Marvel movies in order, to see the events as they took place (with flashbacks thrown in just to throw you off), is a fun experiment.

Some plot points might become stronger, while some plot holes might seem more obvious, but for a decade-plus-long story, it’s bound to be impressive. And after going from 2011’s Captain America: The First Avenger to 2019’s Captain Marvel, the rest will surely seem more sensical.

All of the Marvel movies in order of release

We recommend watching the Marvel movies in order of their release for a few reasons. It’s fun to see how the special effects and actors evolve over the years, you won’t feel as bad about skipping around if you don’t want to do a complete binge-watch and, quite frankly, the release order tells a stronger narrative — watching a movie like Captain Marvel out of release order might be more confusing than enjoyable.

You'll see below that we've broken them out into Marvel's three Phases, the groupings it uses to show the major chapters of The Infinity Saga.

Disney Plus: Waiting to have all the Marvel movies in order

The big perk of Marvel movies hitting Disney Plus is that this means all of them can be saved for offline for your night flight(s). As much as we’d love to tell you that you’ll be able to stream all the Marvel movies in order on Disney Plus, that’s unfortunately not the case. Disney Plus launched with these 16 (out of 23) films, and added its 17th movie (Thor: Ragnarok) recently.

While we wish all 23 MCU movies will streamable on Disney Plus eventually, there's reason to suspect that The Incredible Hulk and both Spider-Man films won't make it, due to being owned by Sony and Universal, respectively. Black Panther and Ant-Man and The Wasp, however, should be on in due time, once contracts with Netflix expire.

For more, read our full Disney Plus review.

Not all Marvel movies are that great. Sure, there are some gems out there — critics loved Black Panther and Thor: Ragnarok — but for every Endgame there's also a The Incredible Hulk (remember the pre-Ruffalo Hulk?). So, for those trying to find the best (or worst) MCU films, we have your back.

Other places to watch the Marvel movies in order

The cheapest option would be to hurry and watch whichever films are still available to stream on Netflix, Hulu and Amazon Prime Video now, then rent the rest through iTunes or Amazon for $1.99–$3.99 each. But if you’re a hardcore fan, a collector or simply looking for a reason to burn a hole in your wallet, you might wanna consider preordering the Infinity Saga Collector’s Edition box set from Best Buy. It’ll cost you — are you sitting down? — a whopping $549.99, BUT it contains all 23 films on 4K Ultra HD Blu-ray; never-before-seen content; a letter from the president of Marvel Studios, Kevin Feige; and lithograph art by Marvel artist Matt Ferguson. Plus then you’ll own them all forever!

Yes, even The Incredible Hulk.

Our picks for the top 10 Marvel movies

Now, if you want to watch the best of the best, that list is going to look a little different. Here are our top 10 (sorted in release order) based purely on the quality of the film itself (and no, this was not an easy list to make):

Though others will undoubtedly have a different top 10, most of us can agree on one thing: There’s almost no reason ever to have to watch The Incredible Hulk.

The Marvel movies you could skip

So you’re not a completist but want to familiarize yourself with the MCU as quickly as possible? We get it. Not everyone has 48 whole hours to devote to just one franchise. Here’s where it gets a little tricky, though: Some of the best films aren’t necessarily the most important to watch for a greater understanding of the overarching narrative of the MCU.

For example, Thor: Ragnarok and Spider-Man: Homecoming are two of our all-time favorites, but they’re almost the cinematic equivalents of “bottle episodes,” in that they’re very fun one-off stories that don’t do a whole lot to further the larger story leading up to Endgame.

If you want a shortened version of the main narrative, we’d suggest watching at least these eight films:

These should give you a cursory understanding of the heroes, villains and Infinity Stones, enough not to feel lost by the time you get to Endgame.

How the Marvel shows fit in

Not overwhelmed enough yet? Good, because the MCU doesn’t stop at just the movies. There are also a boatload of shows that connect (some more than others) to the super hero blockbusters.

Marvel’s Agents of S.H.I.E.L.D.: As its name suggests, this show follows the previously sidelined agents who keep our favorite heroes in check in the films. It’s also one of the most closely tied shows to the movies, which makes it difficult to say how best to watch. For example, a game-changing Winter Soldier reveal directly affects a season-one episode of S.H.I.E.L.D. that aired the same week the movie was released. Because the movie tie-ins continue to happen throughout its six seasons, we’d suggest just bingeing the whole show after you’ve caught up with all the movies.

The Marvel Netflix shows exist in the MCU, but they’re more closely related to one another than to the films. For that reason, after having at least watched Marvel’s The Avengers, we’d suggest bingeing the Netflix Originals in release order: Daredevil, Jessica Jones, Luke Cage, Iron Fist, The Defenders and The Punisher. (But, honestly, you can skip Iron Fist altogether.)

Chronologically, Marvel’s Cloak & Dagger (Freeform) takes place shortly after the events of Civil War, and the show cleverly gives a lot more backstory to the corrupt Roxxon company that operates in the background of the films. Marvel’s Runaways (Hulu) also takes place around this time but is much less connected to the films. We mention them here together because the two shows will cross over when season three of Runaways premieres Dec. 13, so you’ll definitely want to catch up on both before that happens.

Once you’re done watching, rewatching or catching up, there are a ton of new films and TV shows on their way for you to look forward to. Dates on most are still tentative, but you have at least until May of next year before being inundated with new content.

To kick off Phase 4 of the MCU, Marvel Studios plans to release the much-anticipated Black Widow solo movie in May 2020. Plot details are scarce, but it sounds like the film will follow our favorite KGB assassin turned Avenger following the events of Civil War, with flashbacks to her early Red Room training.

In 2021, we’re expected to get Shang-Chi and the Legend of the Ten Rings, Doctor Strange follow-up Doctor Strange in the Multiverse of Madness and Thor: Love and Thunder, featuring Natalie Portman as Jane Foster, Goddess of Thunder.

If those aren’t enough, Marvel has already announced a Black Panther sequel, Blade, Guardians of the Galaxy Vol. 3, a Captain Marvel sequel and (yet another) Fantastic Four. It’s currently unclear whether these movies will be released in 2021 or later.

After canceling all of its Netflix Originals, Marvel has big plans to further its TV-verse and make it even more connected to the movies. The Falcon and the Winter Soldier, starring Sebastian Stan and Anthony Mackie, will arrive later next year. In 2021, we’ll get Tom Hiddleston reprising his role as Loki in the aptly titled Loki; Elizabeth Olsen and Paul Bettany as Wanda Maximoff/Scarlet Witch and Vision (respectively) in the perhaps too aptly titled WandaVision; and Jeremy Renner as Hawkeye in, you guessed it, Hawkeye.

Other announced shows include What If?, Ms. Marvel, Moon Knight and She-Hulk.