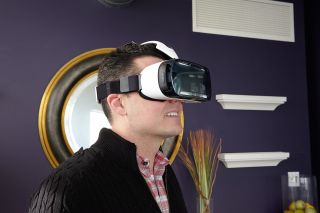 Virtual reality is a pipe dream no longer; the technology is here, and it's awesome. Instead of experiencing entertainment on a flat screen, you can now put yourself in the action and physically look around digital worlds. Want to visit the other side of the planet or attend a concert in a faraway town? Strap on a VR headset, and you can be virtually transported there immediately. VR is ready for the masses, but it's only the beginning.

"There's going to be a big push from the tech and content community to make virtual reality real," said Gartner analyst Brian Blau. "In the consumer market, it's going to be games, live video and events. In the next few years, you might buy a new house and see it first in virtual reality."

Companies small and large have been working to bring VR to the masses, and there have never been so many ways to fully immerse yourself in games and entertainment as there are now.

Devices such as the Oculus Rift and PlayStation VR have the potential to change the way people game on PCs and consoles, while a new wave of mobile-based VR headsets will turn your humble little smartphone into an engrossing virtual reality display. Even Mattel's iconic View-Master toy has been reimagined as a VR headset, allowing little ones to learn about locations around the globe without leaving the classroom.

Here's a breakdown of every major virtual reality headset coming your way, as well as when and how you can get your head inside one.

What it is: Samsung's Gear VR makes virtual reality mobile by docking recent premium phones, including the Galaxy S6, S6 Edge, S6 Edge Plus and Note 5, and turning the devices into immersive displays. Co-developed by Oculus, Gear VR is smaller and lighter than its PC-based cousins, and offers a mix of VR games, games and entertainment experiences via partners such as Imangi Studios (Temple Run), Cirque du Soleil, Netflix and Marvel Entertainment. Thanks to the Oculus team up, the Gear VR boasts a deep catalog, creating a truly compelling experience for an impressively affordable $99.

Who it's for:The $99 consumer model is a great device for consumers that own one of the compatible Galaxy smartphones. Boasting a wide variety of content, the Gear VR is a great entry-level product for those consumers curious about virtual reality, but not ready to invest in a more expensive PC setup.

Availability: The $99 Gear VR is currently available and supports the Galaxy Note 5 as well as all variations of the Galaxy S6, including the S6 Edge Plus.

What it is: The antithesis of just about every other headset on this list, Google Cardboard is an Android-based platform meant to allow anyone to experience VR on the cheap. Users can build their own Cardboard headsets using Google's schematics, or buy inexpensive third-party viewers such as DodoCase (starting from $24.95) or I Am Cardboard (starting from $19.99). Once you pop your existing Android phone into your viewer, you've got a virtual reality headset.

The Play Store's selection of Cardboard apps currently includes immersive games, such as Proton Pulse, as well as a virtual Paul McCartney concert that lets you soak in a 360-degree view of the performance. Mattel is using Cardboard as the foundation for its new-age View-Master toy, which allows youngsters to visit famous landmarks in virtual reality.

Who it's for: Everyone. Cardboard is the most accessible means of experiencing VR yet.

Key specs and features: Varies by smartphone and viewer, works with most Android phones.

Availability: Cardboard apps for Android are available now on the Play Store,

and you can either build your own viewer or buy one from DodoCase, I Am Cardboard, Knox Labs or Unofficial Cardboard. Mattel's Cardboard-based View-Master is due this fall for $30.

What it is: Just call the Merge VR a purple people pleaser. Merge Labs' headset is hard to miss in a crowd due to its violet hue and squeezably soft antimicrobial foam. Another key differentiator is Merge VR's ability to deliver both augmented and virtual reality. The mobile-centric headset can be used on iOS and Android thanks to the free Merge Start app and can fit a smartphone as large as the iPhone 6 Plus. However, the best thing about the flamboyant device is its fairly affordable $99 price tag, making VR and AR truly available to everyone.

Who it’s for: Mainstream mobile consumers looking for a system that can be used on multiple platforms. Its soft plushy body and educational software also makes it a good choice for kids.

Key specs and features: Offers a headset made from soft, antimicrobial foam, fully adjustable lenses, compatibility with apps on Android and iOS and a camera port for augmented reality features. Fits phones as small as the iPhone 5 and as large as the iPhone 6 Plus. Features motion-based controllers.

Stationary or movement based: Stationary

Availability: Available now for $99 on Amazon.

What it is: Impression Pi takes the technology found in the Galaxy Gear VR and takes it several steps forward. Instead of being confined to certain Samsung smartphones, the headset works with iOS and Android devices. Developed by U

Sens, the headset (starting at $149) also features head- and hand-tracking capabilities along with augmented reality functions. A higher-end model of the headset will eschew a smartphone in favor of a built-in display and be tethered to a high-powered laptop or desktop PC.

Who it's for: Developers, educators and enthusiasts. Unlike other headsets that focus heavily on gaming, Usens is targeting the education and medical fields with its device. That's not to say the company is opposed to games or other forms of entertainment, as the Impression Pi is compatible with apps developed via Unity and the Google Cardboard SDK.

Stationary or Movement-based: Both

Availability: Both the $149 smartphone kit and the $349 version with the built-in display will be available for purchase in Summer 2016.

What it is: Oculus Rift is finally ready for consumer hands. Priced at $599, the highly-anticipated Rift will be the first PC-based virtual reality on the market. When the pre-orders ship starting March 28, the package will include a headset with a brilliant OLED display and 360-degree positional head-tracking technology, as well as an Xbox 360 controller. The Rift also offers engrossing spatial audio via built-in headphones.

We've generally been blown away by various demos. I have stopped time in games like Bullet Train, pulling missiles out of the air and throwing them back at enemies. I've also come face to face with a dinosaur and controlled a space ship in a Star Wars-style dogfight. Once you strap in, the majority of the high-quality content will live on the company's proprietary Oculus Home Platform.

Oculus has been demoing it Touch controllers for the system, but those will launch at a later date.

Who it's for: Gamers and early adopters with disposable income.

Availability: Oculus Rift is now shipping for $599 with  the headset, microphone, sensor and an Xbox One controller. The Oculus Touch controllers will go on sale at a later, yet-to-be-announced date.

What it is: The product of a partnership between Valve and HTC, the Vive has the potential to unseat Oculus as the biggest thing in VR. Powered by Valve's SteamVR platform, the Vive stands out by letting users walk around a 15-by-15-foot space in virtual reality using a pair of strategically-placed base station and Valve's propietary Lighthouse technology. The setup also ships with two touch-enabled controllers for interacting with the environment. The Vivehas a front camera that displays outlines of the real world in tandem with the grid lines from Valve's Chaperone software to prevent you from taking a nasty fall while you're walking in the virtual wonderland.

Who it's for: Gamers, virtual explorers and kids in classrooms. Valve is one of the biggest names in both game publishing and digital distribution, though HTC wants to go beyond gaming and tap the headset's potential for immersive education.

Key specs and features: 2160 x 1200 resolution, 90 fps refresh rate, 110-degree field of view, positional tracking, location tracking at up to 15 x 15 feet, included controllers. Paired with the room-tracking Chaperone software, the new front camera will show when you're getting close to a wall as well as objects or people. You'll also have the ability to switch to live view, which delivers a sketch-like outline of nearby objects.

Stationary or movement-based: Both.

Availability: The HTC Vive is now shipping for $799 with the headset, controllers and base stations.

What it is: Sony's PlayStation VR (originally called Project Morpheus) is a virtual reality headset being built exclusively for PlayStation. PlayStation VR uses Sony's Move accessories to bring motion control to its VR experiences, and is known for being one of the more ergonomic headsets in development. There's no word on whether you'll be playing the next Uncharted or God of War in virtual reality when the device arrives in 2016, but previous tech demos have allowed players to do things such as shoot guns, engage in swordfights, and wield a bow and arrow.

The latest PlayStation VR prototype has an even cozier design and twice the frame rate, meaning PS4 owners can look forward to super-smooth VR experiences that won't strain their necks.

Who it's for: PS4 gamers. PS VR is one of the few virtual reality headsets targeted exclusively at console consumers.

Stationary or movement-based: Both

Availability: PlayStation VR is due out in the first half of 2016.

What it is: Razer OSVR (Open Source Virtual Reality) is an open VR ecosystem meant to encompass a range of headsets, accessories and software experiences. Creators can download the software and schematics necessary to build their own OSVR headsets, or can register to buy pre-built OSVR Hacker Dev Kits. OSVR has a ton of development support, with major players such as Leap Motion, Ubisoft and Gearbox Entertainment already aboard.

Who it's for: Developers and enthusiasts. OSVR is open platform, and Razer is willing to put it in the hands of anyone willing to build their own hardware and software for virtual reality.

Availability: The schematics for building a Razer OSVR headset are available now, with a pre-built OSVR Hacker Dev Kit shipping this summer for $200.

What it is: One of the most futuristic-looking headsets on this list, the Sulon Cortex stands out by providing a blend of virtual- and augmented-reality experiences. This massive headpiece has spatially aware sensors, meaning it can track your hand gestures without requiring a separate controller and can map out your living room before turning it into an alien-infested arena. The Cortex is also unique in its ability to store content and stream from the cloud, meaning you'll potentially be able to run VR apps and games without having to be hooked up to a PC.

Who it's for: Devoted developers and augmented-reality enthusiasts. The Cortex dev kit sells for a steep $500, meaning only the super dedicated need apply for now.

Key specs and features: Resolution and frame rate not available. Sports spatial sensors for both virtual- and augmented-reality applications.

Stationary or movement-based: Both

Availability: The Sulon Cortex developer kit can be pre-ordered for $499.The company website says "the future is coming Spring 2016."

While we're still far from a future in which VR headsets are as essential as smartphones, it's becoming easier to try virtual reality for yourself. Virtual reality for mobile devices currently has the lowest barrier of entry, as platforms such as the Gear VR and the super affordable Google Cardboard let you experience virtual reality via your own smartphone's display.

If you're more excited by PC gaming, the impressive Oculus Rift and the dark horse HTC Vive Pre are around the corner, and the PlayStation VR for PS4 owners won't be far behind.