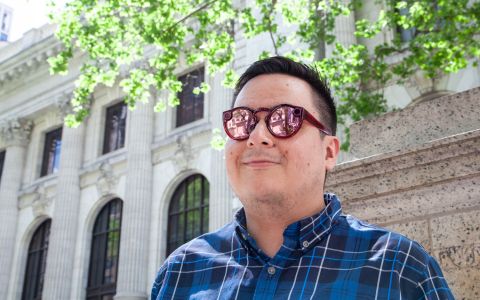 Some sequels come from less-than-successful originals. Such is the case with the Snap Spectacles 2.0 ($150), a new set of camera-equipped glasses that arrive on the heels of a predecessor that didn't find much of a following.

Snap — short for Snapchat — hopes that faster upload rates, slimmer design, water resistance and photo taking (a major missing feature from the first version), will be enough to make its second pair a hit.

Still, these Spectacles are only for Snapchat die-hards, due to an awkward upload process. Even then, the new glasses lack the AR filters that Snapchat users love, making them hard to recommend.

Who are these for, again??

Whether you're new to Spectacles, or you remember the pain of finding an original pair, there's a lot of confusion about this particular product. First of all, yes, these are glasses made for Snapchat superusers, with a button you click and hold to shoot videos and photos (a surprisingly new feature; it was absent until a recent firmware update). A single click still records a video, while pressing the button down for a second or two takes a photo.

The camera in the Spectacles is above the right lens, while the signal lights that show you're recording — so you can't be a stealthy creep — can be seen above the left eye. Microphones in the glasses allow you to narrate your own footage. Think of Spectacles as a GoPro, but for those obsessed with social media.

The footage produced by the glasses creates 360-degree videos in the Snapchat app, allowing viewers to see more angles by rotating their phones.

The first set of Spectacles got attention because Snapchat was increasing in popularity at the time of the product's late 2016 release; at the time, Instagram had yet to make such a successful copy of Snapchat's features in Instagram Stories. Also, Snap created a scarcity by making Spectacles hard to find (more on that later).

MORE: How to Use the New Snapchat Like a Pro

Alas, the glasses never generated the expected demand, and the company wound up writing off $40 million on unsold pairs.

The first major change Snapchat has made is to alter the front part of the glasses from a solid hue (Coral, Black and Teal) in plastic to a transparent hue (Ruby, Onyx and Sapphire). I got the Ruby pair with the mirrored Daybreak lenses, which is a popular combination among the two other people I know who ordered Spectacles. (Hi, Kerry and Christina!)

The arms of the Spectacles are still transparent, but they've moved from a single color to a graduated shade that fades to white. Also, Snapchat has ditched the yellow circles around the camera and the countdown lights.

Not only do these new Spectacles feel better on my face, but I feel less goofy wearing them.

While I was on board with the Teal pair I originally bought for myself, I didn't feel as great about them over time. After asking around, I found that friends and family also prefer this clear look over the solid design.

Not only do these new Spectacles feel better on my face, but I feel less goofy wearing them. Moving from the first-generation pair to the second, I noticed how the new model feels less tight on my head. Comfort wasn't a major problem with the original pair, but I've worn these for more extended periods of time than the original pair.

But since Spectacles are also a fashion accessory, they're not judged just against their predecessors, but also against all stylish eyewear. I found out that the Tom's Guide office can turn into a techie version of Fashion Police when I wore the Spectacles around the office: my colleagues decided to vocally disagree with my choice and roast my new accessory.

My favorite gems include:

"I mean, I could see how Snapchat thought those would look cool."

"If you're going to go that weird, go weirder."

"No, absolutely not. Take those off."

"You look like Krang's exoskeleton from Teenage Mutant Ninja Turtles."

The glasses themselves have also shrunk, from 1.8 inches down to 1.4 inches thick overall, and the shoulder points of the glasses, where its camera and buttons lie, got dialed down from 1 inch to 0.7 inches.

Also, their carrying case is a lot more portable, now measuring up to 2.2 inches thick, as opposed to the 3.2-inch thick case that the original came in. The case no longer features a foam body, moving instead to a fabric-and-plastic shell.

Water resistance: Yes, you can shoot in a pool

Snap touts the Spectacles 2.0 as a perfect summer accessory, in part because of water resistance. Snap says you can use the Spectacles in "rain, snow, and even in shallow water," but that they shouldn't be submerged for "more than a few Snaps at a time." Snap didn't provide an IP rating that offers a precise definition of their durability or the depth to which they can be immersed.

I tested this out at home, repeatedly dunking them into a water glass and shooting a few videos (30 seconds' worth). The clips imported to my phone without a single hitch, just as if the glasses were on my head. While I'd take them swimming, I wouldn't spend more than 30 to 45 seconds underwater at a time.

Performance: Better, with room to grow

But what about Spectacles' biggest pain point: importing content from the glasses to the app? There's good news and bad news here. First of all, connection and upload speed have both improved significantly. While it took 46 seconds (including initialization) for three videos to transfer from my first-gen Specs, Spectacles 2.0 transferred three clips in 26 seconds: a reduction of 43 percent.

Connection and upload speed have both improved significantly with Spectacles 2.0.

The second microphone in the new Spectacles allows for better audio in your videos. When I recorded a moment inside my favorite bagel shop, the glasses accurately captured the sound of The Killers' "Mr. Brightside" playing in the background.

Still, the fact that you need to manually sync your Spectacles and transfer images, is an issue. It's the kind of wonky problem you'd hope would be ironed out in a second-generation product. Yes, you can manually export videos to Instagram (where they look good in Stories) and other social media apps, but that requires even more taps.

Even with these new updates, Spectacles still don't allow for any augmented-reality tricks. You may enjoy superimposing dog faces and other AR-powered effects on photos in the Snapchat app, but you can't do that for video you shoot with the glasses.

Ordering is easier, including prescription editions

Snapchat's original plan — selling Spectacles in randomly appearing yellow booths — sparked interest, but didn't lead to solid sales over time. Maybe that's why you can now easily order Spectacles from Amazon (or Snapchat.com). Not only does this mean Prime members get free two-day shipping, but you've got Amazon's 30-day return policy in case you don't find these to be the best way for you to spend your money.

If you're like me and wear prescription glasses, you'll appreciate how Snapchat's improved the prescription ordering process. It's partnered with the Lensabl lens company, so you can buy Spectacles with prescription-strength lenses.

Even with these new updates, Spectacles still don't allow for any augmented-reality tricks.

Personalizing Spectacles with your prescription isn't free, though. It adds up, adding between $125 (for single-vision strength) and $195 (for progressive, multifocal lenses) to the $149.99 price. You'll note that the original Spectacles cost $130, so these new glasses are $20 more expensive.

Spectacles still tout solid battery life, enough to where I forgot about charging them.

Bringing the Spectacles with me on a recent trip to Detroit, I found that I never had to refuel the charging case, despite taking 128 snaps over the course of the weekend.

This longevity is in part due to the carrying case in which I kept them overnight. The case doubles as a charger, which can significantly improve the product's battery life. Spectacles are rated for 70 videos on a single charge, and their carrying case contains four charges. Snap doesn't advertise charging times, but the specs and case seem to refuel quickly: I never noticed either at low capacity, once I started charging.

Spectacles 2.0 are definitely an improvement. If this is your first go-round, and you're giving the accessory a glance now that they look less childish, they may be worth a chance. But what about the early adopters? Is there enough of a difference from the first pair, especially with Snap expecting you to pay $20 more?

If your annoyances with the first Spectacles were limited to lengthy upload times, portability and comfort, you've got the green light to buy, buy, buy. But you might want to wait if the AR filters are your favorite part of Snapchat, or if you disliked how many taps it takes to get a snap from the Spectacles to your friends. At the end of the day, though, I do see myself using Spectacles 2.0 more than the original.