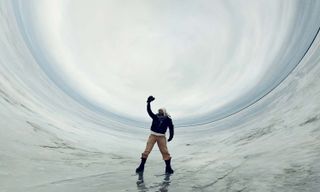 You don't see the world around you in a rectangle or a square, so why should limit yourself to that view in photos and videos? 360-degree cameras let you record everything going on around you at once. If you have a VR headset, such as the Gear VR or Google Cardboard, you can enjoy that trip to the Grand Canyon, family birthday party or that concert in virtual reality and really feel as if you were there. Or you can just watch 360 clips on your phone or laptop after uploading them to YouTube or Facebook.

After testing more than a dozen models and evaluating them on video quality, field of view, water resistance, ease of use and other factors, we think the best 360 camera for most people is the Insta360 One X ($399). It's small and portable, works with both Android and iOS smartphones, and has some great features, such as the ability to record Matrix-like "bullet-time" videos, as well as create motion-stabilized video to smooth out those rough rides.

Our favorite budget 360 cam is the Samsung Gear 360 (2017), which is a bit old, but takes good pictures for its size and price. However, it only works with Samsung smartphones and some iPhone models. Make sure you check out all of our top picks for DSLRs, mirrorless cameras and more on our best cameras page.

The best 360 camera, the Insta360 One X features an updated image-stabilization feature that will make even the bumpiest videos look smooth. The One X can capture 5.7k video (5760 x 2880) at 30 fps, and 4K video at up to 50 fps. Its FlowState image stabilization algorithm helps smooth shots, and a TimeShift feature lets you slow down or speed up specific segments of your videos. The One X can connect to Android or iOS devices via Wi-Fi or via USB, and lets you livestream videos, too. \

Best 360 Camera for those on a budget

$179
View at Amazon
$355.49
View at Amazon
Check Walmart
See all prices (4 found)
Works with both Samsung and iOS phones
Can be used without phone
Easy to use
Comfortable to hold
Good photo quality for the price
Doesn't work with any Android phones except Samsung's
Limited features when used with iPhone
Poor desktop software

The second generation Gear 360 sports a new design that makes the camera smaller and easier to hold, but remains just as intuitive to use, and takes great pictures, too. The Gear 360 livestreams to Facebook and YouTube, too. Still, we have some reservations: Android users will have to own a Samsung smartphone to use the camera, and while it works with iPhones, not all of the Gear 360's features are supported. If you're looking for something more universal, the LG 360 cam supports all phones and costs $40 less, but has a lower-resolution camera.

Small and compact, the Rylo 360's small GoPro-like profile makes it the best 360 camera for action sports, as its low profile is ideal for attaching to a helmet, bike, or any other action-y activity. What makes it even better is its motion stabilization, which keeps the horizon level no matter how bumpy the ride. However, if you're going to get it wet, you'll want to get a case, as this camera lacks any sort of waterproofing.

Rylo has been acquired by VSCO, and will no longer make 360 cameras. However, the company will honor the warranty on existing cameras.

High-quality 360 photos, for a price.

If price is no object, then you should check out the Ricoh Theta Z1, which took some of the best low-light photos and videos of any 360 camera we tested. The Z1 uses an Android-based operating system, and Ricoh is letting third-party developers create plug-ins for the camera, increasing its functionality. However, this camera lacks expandable storage, and you need to use two different apps if you want to edit photos or video.

Not only does the Vuze XR take 360-degree photos and video, but its two cameras can pop out so you can take stereoscopic images and video, too. We liked the simplicity of its mechanism, the built-in handle, and, of course, the quality of the images it captured. Still, it had trouble in low-light conditions, and we wish its desktop app were more fully-featured.

The Virb 360 does a great job at stitching sharp and vivid 4K video, it's waterproof to 30 feet, and it can be controlled using voice commands. Plus, data from built-in sensors (GPS, barometer, compass, etc.) can be overlaid into your videos, so you'll know just how fast you were going when you wiped out. However, it's bulky, and very expensive.

This device turns your smartphone into a 360 camera

$189
View at Amazon
$194
View at Adorama
$320
View at Walmart
See all prices (13 found)
210 Amazon customer reviews
☆☆☆☆☆
Is small and portable
Takes 4K photos, video
Doesn't have to be plugged into a phone
Has a fun "bullet-time" video feature
Works with Android and iOS
Lightning connector is hard to remove
Have to hold phone upside down when using app

One of the most compact 360-degree cameras, the Insta360 One connects to your iPhone's Lightning port (there's an Android adapter too), and uses the phone's screen as your viewfinder (the camera can also be used separately). Not only can it capture great 4K video and 24MP photos, but a slo-mo "bullet-time" feature lets you make Matrix-style movies, too. You can even livestream to Facebook and YouTube.

Read our full Insta360 One review.

How we test 360-degree cameras

You get a lot of weird stares and comments when you test 360 cameras. By now, people are used to seeing action cams like the GoPro, but both the shape and way you mount 360 cameras immediately draws attention.

As they need to capture a full 360 degrees of action, most 360 cams are designed with more than one bulbous lens. And, if you don't want half of the image to be the side of your head, you have to mount the camera pretty far from your body.

You'll also want a selfie stick. With few exceptions, the shape of most of these cameras made them hard to securely hold in my hand.

All of the cameras work with a smartphone in a similar manner; when you turn these cameras on, they all create a Wi-Fi hotspot, which you then connect to with your phone. From there, you open the companion 360-degree camera app, and use your phone's display as a viewfinder. For the most part, connecting the cameras to my smartphone was an easy process, and the video feed from the cameras was relatively smooth and stutter-free.

What to look for when buying a 360 camera

360 cameras tend to fall into two camps: small, pocketable stick-style devices, and larger squarish (or circular) cameras. The former, such as the Samsung Gear 360, tend to be less expensive, and are designed for more casual and impromptu shooting. In the second category are cameras such as the Garmin Virb360, which are larger and more expensive, but tend to produce higher-quality video.

Be sure to think about how you plan to use a 360 camera before you purchase it; if you want to get some fun selfies with friends, then the stick-style cameras will fit your needs well. If you want to capture hair-raising exploits when you go skydiving or skiing, then a larger camera may be the better option.