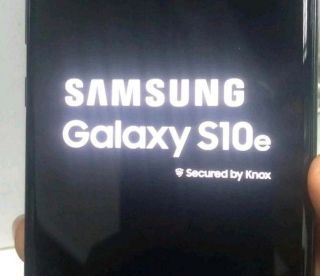 It's widely expected that this month's Galaxy S10 unveiling will feature a trio of new phones, with a lower-cost version joining the S10 and S10+ models.

And now we have a photo of that rumored phone out in the real world, and it even confirms the name Samsung will use for the lite version of its latest flagship.

Images posted to Slashleaks this week show a phone matching the rumored description of Samsung's upcoming S10 release. The phone displays a "Samsung Galaxy S10e" splash screen. That's one of the rumored names for Samsung's entry-level model, which has also been called the S10 Lite in some reports.

A close-up of the phone's front is further evidence that this is part of the S10 family. The image shows off a phone with a punch-hole cutout for the camera, matching the Infinity O display that Samsung will reportedly include with all S10 models.

Recent leaks have given us a good idea about what to expect from the Galaxy S10E, which is expected to feature a 5.8-inch OLED screen and Snapdragon 855 processor but won't match other higher-end specs included with the Galaxy S10 and S10+. It will have the smallest battery of the new S10 phones at 3,100 mAh, and it will only offer dual rear cameras, as opposed to the triple lenses on the back of the S10 and S10+.

The S10E should have the lowest price tag of all three new Galaxy phones, too. In its report on the S10E specs, German-based WinFutures says the phone will debut at €749, as opposed to €899 and €999 for the S10 and S10+. We're not yet sure how those prices will translate to the U.S.