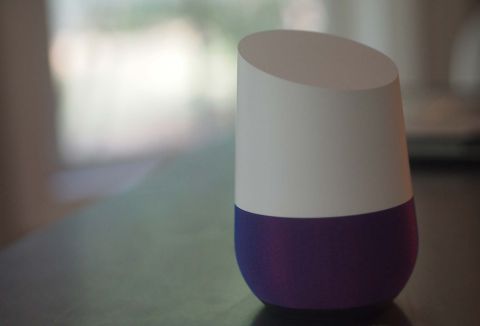 Google Home is a worthy rival to Amazon Echo that plays nice with Google software and hardware, but it lacks some key features of its competitors.

Amazon pioneered the smart speaker category with the Echo, which can do everything from play music to control a number of the best smart home devices via a voice assistant. Google answered with Google Home, a $129 smart speaker powered by Google Assistant that aims to deliver a more personal touch. Google Home gets a lot of things right — including the price, design and responsiveness — but it still has a few things to learn.

The Google Home looks like a teardrop with its top sliced off at an angle. The 5.62 x 3.79-inch speaker is smaller than the original 9.25 x 3.27-inch Echo but attracts the eye more than Amazon's staid, black cylinder. To add more visual sizzle, you can swap out the slate base with a more colorful option, such as orange or violet. Additional bases cost $20, and they're easy to change with a twist and a pull.

Although the appeal of Google Home lies in its hands-free operation, you can also use your hands when needed. The top of the speaker is touch-sensitive, though it lacks any marks to indicate so. Tap once to pause or play, or swipe clockwise to raise the volume. A long press activates Google Assistant. And if you don't want the speaker to constantly be listening for the activation phrase "OK, Google," you can mute the microphone with a button on the back.

As Amazon did with the Echo, Google left out some features we're used to on speakers. With no battery, the Home isn't mobile, and it's not waterproof — which would be nice in the kitchen. It also lacks a speakerphone, auxiliary input and even Bluetooth connectivity. (You connect to it via Wi-Fi.)

Google Home is powered by Google Assistant (the company's Siri and Alexa competitor), and if you use Google's tools (such as Gmail, Calendar or Contacts), Assistant opens up a lot of possibilities. Google Assistant can tap into your email, calendar, search history and more — in essence becoming an intelligent extension of your online existence.

Setup is simple. Once you download the free Google Home app for Android or iOS, the app walks you through the steps. I was up and running within 5 minutes. You can connect your Google account so it can access your existing info, as well as link to existing YouTube Red, Spotify and Pandora accounts for music. Google Home doesn't work with Apple Music or Amazon Music.

You can also add some smart home devices, including the Nest, Philips Hue and SmartThings, as well as Google Cast devices, such as a Chromecast. However, right now, the list of compatible devices is much shorter than the Echo's (although Amazon's device has had more than a year to build a lead in that area). As of January 2017, Google Home has added support for Belkin WeMo and Honeywell devices. Here's a full list of compatible products and services for Google Home.

In many ways, Alexa on Echo and Assistant on Home are similar. Both can answer basic questions. For example, you can ask, "What's the weather?" or "Who won the baseball game last night?" Both speakers can also control music playback. I find Alexa's voice more realistic than Assistant's, though both are better than Apple's Siri. Google Assistant responded more quickly than Alexa on most questions, and Assistant could handle a few questions that Alexa could not.

I asked, "How do you say 'Let's go' in French?" and Assistant responded correctly, whereas Alexa needed me to open the Alexa app on my phone to see the answer. However, neither virtual assistant is smart enough to answer more complex questions, such as "Who got the winning hit in the World Series last night?" or "Who is the top-ranked team in college football?"

Humor may help you determine which virtual assistant is best for you. Ask Assistant to tell you a joke, and you get something like, "How do you make a tissue dance? Put a little boogie in it." Alexa has a different slant: "I love math! You know what seems odd to me? Numbers that aren't divisible by two."

Assistant includes some games for people looking for interactive entertainment. I played the "Are You Feeling Lucky?" trivia game. Assistant read the questions and gave me choices for the answer. You don't have to say "OK Google," before you respond; while it's in game mode, the speaker is continuously listening for your response.

Google Home has excellent microphone range. I could engage Assistant from various points on the first floor of my house, including about 20 feet away and in a different room. Alexa matched that range, also responding from each location I tried.

A big differentiator for Google Home is its integration with Google Cast devices, including Chromecast. Echo can't control Amazon Fire TV, even though it's also an Amazon product. You no longer need your phone to start or control a cast; you just need your voice. I connected a second-generation Chromecast and the Cast-enabled Nvidia Shield. Although I liked the convenience of the feature, the functionality needs to be more developed before it becomes an Echo killer.

To start a cast, you say what you want to play and which device you want to play it on. For example, you can say, "Play Bob Dylan on Shield," or "Play jazz on Chromecast." Google Home uses your default music service unless you specify a different one. If you use Chromecast Audio for multiroom audio, you can specify a speaker set, too. You can even launch videos with your voice. When I said, "Play Cubs videos on Chromecast," it played videos from YouTube. The speaker can't control Netflix or other video apps yet, though.

But the implementation has some bugs to work out. I had difficulty getting Spotify to launch, especially when the app wasn't already running on the Chromecast. It worked best when I started the cast from my phone and then used Assistant to change the song.

As a speaker, Google Home was heavy on the bass in our tests. That works well with some kinds of music (such as hip-hop), but not all. The Echo delivered more balanced sound.

The bass thumped on The Weeknd's "Starboy," but it overwhelmed the vocals, and Norah Jones' voice on "Tragedy" also got lost in the bass. The Echo did a much better job of handling the vocals on both tracks.

However, Jidenna's rap was easy to hear over the deep groove and thump on "Long Live the Chief," while the Echo sounded wimpy on bass for that track. The trumpet and acoustic bass on Cannonball Adderley's version of "Autumn Leaves" sounded warm and full thanks to the bass.

Google Home gets loud enough to fill a large room, although the bass gets even more prominent as you turn it up. I measured it maxing out at 85 decibels; the Echo gets a bit louder, but the difference is barely noticeable.

With its multiroom audio capabilities through Google Cast, Google Home can also act as a Sonos competitor. You can enable the feature by connecting a Chromecast Audio to any powered speaker, or by buying a Cast-enabled speaker such as the Vizio SmartCast 5.1 soundbar.

Google has made the smart speaker race interesting with Google Home. It can do many of the same basic things as Amazon's Echo can, yet it costs less and has more visual appeal. The Echo delivers better sound, and it connects to far more smart devices, but you can expect Home's add-ons to increase over time. And Chromecast integration — when it works — shows the potential of voice navigation for entertainment.

Because both devices perform well, your decision of which smart speaker to buy should come down to the services you use, rather than the speaker itself. If you like Amazon Music and take advantage of the shopping integration Alexa offers, the Echo is a better match. But if you use Google for your mail, calendar and other online tools, Home becomes an invaluable extension of your digital existence.