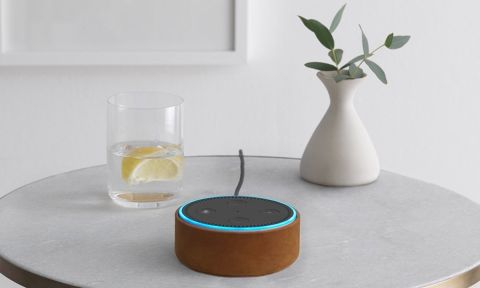 The Amazon Echo Dot is an easy way to update your home stereo system with smart home features.

Audiophiles who already have a pretty respectable home stereo system can make it even better with the $49 Amazon Echo Dot. Folks who just want access to Amazon's smart assistant, Alexa, but don't want to spend $99 on the Echo, may also enjoy this little hockey-puck-looking device. The Echo Dot is an impressively versatile gadget, and while it's not the best in terms of sound quality, it's one of the best affordable smart home devices you can buy.

Editor's Note: Amazon's third-generation Echo Dot has a new design and much improved sound, but is selling out its inventory of second-generation Echo Dots at reduced prices. If you have a Bluetooth speaker, you can connect it to the Dot to make an inexpensive smart speaker. For all of our top picks, be sure to check out our best smart speakers page.

The Amazon Echo Dot looks like someone chopped off the head of the original Echo. It looks like a hockey puck (3.3 x 3.3 x 1.3 inches) with a  ring of LED lights around the top edge that serve as a status bar.

The light surrounds two rows of perforated dots that indicate the speaker. An Action button, volume controls, and a button to enable and disable the microphone sit on top. The bottom is coated to feel a bit tacky, which should keep the Dot from slipping off your counter. You can get the Dot in black or white, though Amazon—as well as a number of other companies—make cases in different colors and materials, should you want to add a bit more personality.

The Dot is surprisingly lightweight at just 5.7 ounces, but since it must be plugged in at all times, it's not exactly portable. However, there are several third-party battery cases that let you take the Dot on the go.

Once your Echo Dot arrives, you'll need to plug it into the wall, and then open the Alexa app (iTunes or Google Play). The app will walk you through the rest of the steps.

The Dot has its own built-in speaker, but neither Amazon nor I would recommend that you use it. The Google Home Mini, a similarl smart speaker that uses Google Assistant, sounds much better for its size. Instead, you'll want to connect this smart home device to a better-sounding speaker. You can do this over Bluetooth or with the included 3.5-mm cable.

To connect the two, Amazon recommends you keep the speaker at least 3 feet from the Echo Dot. You'll want to turn the volume on the stereo up, because Alexa will then be able to control the volume through voice commands. The Echo Dot can connect to only one Bluetooth device at a time, which you do through the Alexa app. I easily unpaired and repaired the Dot to the Bose by just saying "connect" or "disconnect."

The Amazon Echo Dot does all the same things as the Amazon Echo. The Alexa smart assistant inside both can play music, read audiobooks, report the news and weather, tell you sports scores, set alarms, find movie showtimes, control your lights and thermostat, check the traffic, buy products, create to-do lists — and so many more things — right out of the box. Check out our list of the Best Alexa Skills.

With simple voice commands, the Echo Dot let me change the temperature on my Nest thermostat. Alexa told me it was going to rain, and that the Mets had lost. I quickly set an alarm for 5 seconds in the future, which went off right on time. I also listened to Alexa read my Audible book, "The Magicians."

I found that the Echo Dot took a half-second longer than the Echo to process my requests before it was ready for the next command. This caused me to repeat myself several times, which was frustrating. But generally speaking, Alexa leapt into action instantly when I asked it to perform any task.

You can also use Amazon Skills to make Alexa smarter and more helpful. This lets third-party developers connect to Alexa, allowing you to turn the Echo Dot into a fortuneteller, gaming device, therapist and pizza delivery service. Or you can connect an Echo Dot to the service IFTTT, to set up recipes for automating things such as smart home lighting settings, based on your physical location.

While Amazon got off to an early start with Alexa, Google has also made a number of strides with its voice assistant (plaintively named Google Assistant), which is available in devices such as the Google Home and Google Home Mini. There's also Apple's Siri, which, aside from iPhones and iPads, is only available in one smart speaker, the Apple HomePod. We compared Alexa, Google Assistant, and Siri in a multi-round showdown and found that Siri fell a bit behind its competition, especially in regards to smart home control.

The Echo Dot was designed with home stereo systems in mind, so audio playback is its most important feature. Thanks to integration with Amazon Prime Music, Spotify Premium, Pandora, TuneIn, iHeartRadio and Audible, you can stream music through your home's speakers. By plugging this little device in, you can instantly modernize your setup.

The audio I played through the Bose SoundLink Color started right away and sounded fantastic. "Let's Get It On" by Marvin Gaye sounded full, deep and fully nuanced. I could even pick up the sound of the drumsticks just as they hit the top hat, before I heard the snap of the chime. The bass and purposeful fuzz in "Intergalactic" by the Beastie Boys came through loud and clear. When I listened to the same songs on the Echo, both seemed muffled and less detailed. And when I turned up the volume all the way, the top end sounded distorted.

Definitely don't plan to use the Echo Dot as a stand-alone speaker to listen to music. In that mode, "Intergalactic" and "Let's Get It On" lacked all lower notes, and the music sounded like someone had tried to suffocate the speaker in its sleep. However, the speaker that is built into the Echo Dot works for alarms, weather reports and basic news briefings.

The Amazon Echo Dot is the least expensive way to start making your home smart. It lets you perform a wide variety of actions—from looking up the weather to news, listening to music, playing games, controlling your lights, and much more. While its audio quality isn't as good as the Google Home Mini, you can do much more with Alexa than you can Google Assistant. The Echo Dot is an excellent buy for anyone who wants access to a virtual assistant that makes life just a bit easier.