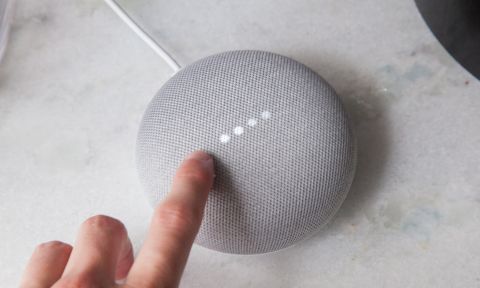 The Google Home Mini looks and sounds better than Amazon's smallest Alexa speaker, but it's not quite as versatile.

Last winter, I — along with countless others — received an Echo Dot as a Christmas gift. Since then, Alexa has worked its way into my daily routine, enabling me to set alarms, turn the lights on and off, and play music, all with just my voice. But after testing out the $49 Google Home Mini, I'm almost ready to switch to team Google. Not only is the Mini more attractive than the Dot, but it also performs miles better as a stand-alone speaker and supports all the best Google Assistant skills. While Alexa still rules in some areas, the Google Home Mini is poised to eat into Amazon's lead as one of the best smart speakers on the market.

While Amazon's smart speakers are very functional, they're not very attractive. The utilitarian Echo Dot, for example, is a black, hockey-puck-size device that doesn't inspire any feelings of warmth.

So kudos to Google for making the Home Mini something that looks and feels friendlier. It's small and round like the Echo Dot, but its curved sides give it a softer look. Like with the larger Google Home, the top of the Mini is swathed in a gray fabric, which only adds to its homeyness.

Hidden beneath the cloth cover are touch-screen controls, which let you play and pause music and launch Google Assistant. Tap one side of the Mini to lower the volume and the other side to pump up the jams. Similar to on the Echo Dot, a physical switch on the back of the Mini lets you deactivate the microphone.

Ed. Note: The touch buttons on top of the Google Home Mini are no longer functional, though the volume controls will still work.

Although the  LEDs on the top of the Home Mini light up when they detect your voice, they're hard to see, especially if the Mini is across the room from you. I prefer the Echo Dot's light ring, which encircles the top of the device, is much more visible and changes color when it hears your voice.

Adding smart-home devices to your Google Home isn't as straightforward as it is with Alexa. To add a device, you first must select Devices from the side menu. Then, you have to select the smart speaker, press the three dots in the upper right corner and choose settings.

From there, you go to Home Control, select the service (Leviton, Philips, etc.), then select the room in which the smart devices are located. With the Alexa app, there's a specific Smart Home menu, from which it automatically detects smart-home devices in your network.

Once connected, I said, "Hey, Google, turn on my dining room lights," and they responded instantly.

Google also lags well behind Amazon in integrating with other smart- home devices. While there are 50-odd manufacturers listed in the Google Home app, some notable missing companies include Logitech (and its Harmony remotes), the Ecobee smart thermostat and Yale locks.

One thing that Google Home has over Alexa is that you can use the Google service to control smart TVs running Android TV, as well as Chromecast devices. I liked that the Google Home app immediately recognized the Sony TV on my home network. You can then tell Google Home to play YouTube, Netflix or other content, and the stream will appear right on your TV. However, your TV has to support voice control; my Sony Bravia XBR-49X830C, from 2014, did not. I had to dig through several menus in the Google Home app to find that out.

Bruce Springsteen's vocals on "I'm on Fire" sounded tinny, hollow and distant on the Echo Dot. It was like listening to a bad AM radio. On the Home Mini, his voice was much fuller, the bass line was much more present, and you could hear more of the nuances in the track. Same thing when I played Billy Joel's "Piano Man"; the song sounded full and strong.

I also liked that I could stream audio directly from a number of sources — such as the Pandora app on my phone and the Chrome browser on my laptop — directly to the Home Mini. That's one thing you can't do with Alexa.

However, the Echo Dot has both a 3.5mm audio jack and Bluetooth, so you can pair it with another speaker very easily. The Home Mini only has Bluetooth, and can only be used to stream audio to the Mini from, say, your smartphone, and not to an external speaker. The only way to do that is if another speaker is connected to a Chromecast device.

Google and Amazon are fairly evenly matched in streaming-audio services, as both support Spotify, Pandora, iHeartRadio and TuneIn. Not surprisingly, Amazon has Amazon Music, while Google has Google Play Music and YouTube Music. However, only Amazon lists support for Sirius XM.

Without anything else playing, both the Home Mini and the Echo Dot were able to hear my voice from across the room, even when I talked in a low voice. However, once I started cranking tunes, I had to raise my voice to a near shout to make myself heard by the Mini. I didn't have to speak as loudly for the Echo Dot to hear me, but then again, the Dot's speaker can't get nearly as loud as the Mini's.

When I first started using the Home Mini, it would trigger itself unintentionally, and try to respond  to things it heard. I had placed it under my TV, so it was amusing at first when it tried answering questions from detectives Briscoe and Green from Law & Order, but quickly grew frustrating. And, because it was an issue with the touch controls, turning off the microphone did not alleviate the problem.

According to Google, a small number of Home Minis had an issue that caused the touch mechanism to behave incorrectly, and the company rolled out a software update that addressed the issue. A day after Google sent me this response, the Home Mini no longer triggered itself. If users are having any additional issues, they should feel free to contact Google Support at 1-855-971-9121.

Ed. Note: Google has disabled touch functionality on all Google Home Minis, so now the only way to trigger the device is to say "Ok Google" or "Hey Google."

When it debuted last fall, the Echo Dot made big waves for its low price; it has never been easier to get Alexa in your home. The $49 Google Home Mini is poised to do just that for Google's Assistant. Not only is it inexpensive, but it also outperforms the Echo Dot in audio quality and design. The Mini's ability to cast both audio and video arguably makes it the better device for delivering smarts to your entertainment system. However, Google is still lagging well behind Amazon regarding skills and smart-home integration, and even the best-designed speaker can't change that fact.