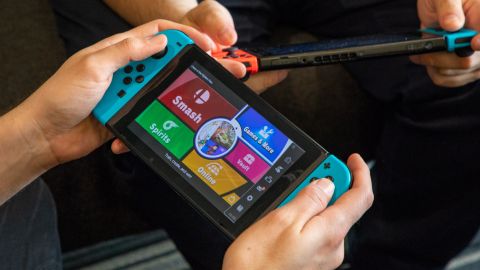 Having had two years to mature after launch, the Nintendo Switch is a fantastic console for all kinds of gamers, even if you're not a Nintendo fan.

After a lackluster console generation with the Wii U, Nintendo managed to turn things around with the much-beloved Nintendo Switch: a cross between a handheld and traditional game console. Since its launch in March 2017, we've seen the console get a revised version with improved battery life and a new Switch Lite model designed solely for handheld use. In light of these changes, it's high time to revisit the Switch and reassess the platform's quality as the console enters its third year.

The standard Nintendo Switch, available with either Neon Red and Neon Blue or gray Joy-Con controllers, has a list price of $299.99 (279.99 pounds sterling). There never tend to be huge discounts on Switch consoles, even during big sales like Black Friday, but you can sometimes find it with a few dollars or pounds off when it's bundled with one or more games. For comparison, the Switch Lite costs $199.99 (199.99 pounds).

You can buy the Switch from many popular retailers, including Amazon U.S., Best Buy, GameStop, Target and Walmart in the United States; or Amazon, Argos, Game and Currys or the Nintendo Store in the United Kingdom.

Like most modern consoles, the Switch has a fairly unremarkable design: rectangles mixed with a few softer curves, all rendered in matte plastics. You can choose the Neon color option, whose blue and red Joy-Con controllers give it a bit more personality. Either way, the centerpiece of the Switch is a gray rectangle with the display on it.

The dock, a rather dull rectangle of gray plastic, is more interesting than its appearance would indicate. There's a space for the Switch to slide into, which contains a hidden USB Type-C connector, plus a port for the AC adapter to attach. The side and back of the dock contain a total of three USB ports for plugging in accessories and an HDMI output to connect to your monitor or TV, covered by a moulded flap that aims to keep your cables tidy.

Mechanically, however, the Switch is very smart. With the Joy-Cons attached to its side rails, the console behaves like a large handheld. Alternatively, you can slide the Joy-Cons off and use them separately in tabletop mode. When you play this way, you can lay the Switch flat, or prop it up on its built-in stand. Finally, there's TV mode, where the console plugs into the included dock to play your games on a separate display. This is the only way you're able to play your games at their maximum 1080p resolution (in handheld mode, they default to 720p), but the console's portability is very useful. It's how many other Switch users and I tend to play. Handheld mode is so prevalent that Nintendo's newer Switch Lite cannot dock to a TV at all.

The console uses game cards for its physical media, which you insert into a covered port on the top of the system. You'll also find the power button, a 3.5-millimeter jack for attaching headphones or speakers and a volume button on the Switch's top edge.

On the bottom you'll find the USB Type-C charging port, which draws power into the console's 4,310-mAh internal battery, either directly from the included power adapter, or via the docking station, filling up in around 3 hours. If you lift up the kickstand on the back of the console, you'll also find the microSD card slot, which allows you to expand your downloadable game storage.

With the Joy-Cons attached, the Switch measures 4 x 9.4 x 0.55 inches (10.1 x 23.8 x 1.3 centimeters) and weighs 0.88 pounds (around 400 grams), making it the smallest and lightest main console of this generation. The built-in display is a 720p LCD screen and is also a touch screen, with the processing handled by an Nvidia custom Tegra CPU.

Both Joy-Con controllers use rechargeable batteries, estimated to have a 20-hour life and to charge to full capacity in around 3.5 hours. You can power up the Joy-Cons by either plugging them into the side rails in the main Switch console, or into various specially designed accessories, most of which are sold separately. (The system comes with a single Joy-Con holder, which approximates the look and feel of a traditional controller.)

The Switch is not as powerful as the PlayStation 4 or the Xbox One, let alone the PS4 Pro or Xbox One X. However, thanks to its popular exclusive franchises and unique play opportunities, the Switch doesn't have to match the competition's graphical abilities to draw in players.

The Joy-Cons are as versatile as the console itself. You can use them together as two halves of a single game pad, or turn them on their sides to use them as two seperate controllers (minus a pair of shoulder buttons) for local co-op and multiplayer gaming.

You'll find HD Rumble in the Joy-Cons for in-game feedback, and an accelerometer and a gyroscope for motion control in both Joy-Cons. However, in the right Joy-Con there's an additional IR sensor, which you can use to control certain games, and an NFC sensor for Nintendo's Amiibo figurines. These unlock extra content in specific titles.

The controllers in the box are accompanied by a few accessories. These include the Joy-Con straps, which slide onto the sides of the controllers to give you a more secure grip when you're using the motion controls, as well as more comfortable shoulder buttons if you're using single controllers. There's also the Joy-Con Grip, which lets you slide both controllers into a more familiar game pad shape. This may be good for players who are used to PlayStation or Xbox controllers. But despite playing on a PlayStation 4 for most of this console generation, I rarely use the Grip. Using the Joy-Cons separately is surprisingly comfortable.

If you want to play first-party Nintendo games online (this includes games like Super Smash Bros. Ultimate and Mario Kart 8 Deluxe), back up your saves in the cloud, play NES and SNES games, or access the companion smartphone app, you'll have to subscribe to Nintendo Switch Online.

Switch Online has some peculiar characteristics. You don't need to pay for multiplayer for every game, but on the other hand, only certain games support cloud games. The smartphone app is also necessary for online voice chat, as the console itself can't do this.

If you want to use your Switch only for local multiplayer, then you don't need to pay for membership. You can pair up to four Joy-Cons to a single Switch console, but you can also connect up to eight consoles together locally for massive multiplayer matches.

Games come either as physical game cards or as downloaded games from the Nintendo eShop.

If you want to download games, the Switch has 32GB of internal storage, which is enough for a handful of games. But if you want a big library, you'll either need to take advantage of the microSDHC or microSDXC card slot, or rely on physical games, which take up less (but not zero) space on the Switch's hard drive.

As for the games available, Nintendo has some of the most famous franchises in gaming history as part of its lineup. One of the most notable initial releases was the epic The Legend of Zelda: Breath of the Wild. Nintendo quickly followed this with the lighthearted platformer Super Mario Odyssey, the fighting game Super Smash Bros. Ultimate, and more recently, the monster-hunting RPG Pokémon Sword and Pokémon Shield.

There are also more big-budget games from beyond the Nintendo brands, such as the recently released The Witcher 3: Wild Hunt, The Elder Scrolls V: Skyrim, Overwatch and Doom (2016). Additionally, the Switch is home to a thriving indie game collection, represented by games such as Untitled Goose Game and Celeste. You can learn more about these favorites and more on our best Switch Games list.

As mentioned above, If you subscribe to Nintendo Switch Online, you also get access to classic NES and SNES titles, allowing you to make the most of Nintendo's high-quality back catalog of games.

The launch Nintendo Switch (model number HAC-001) is rated to last between 2.5 and 6.5 hours, according to Nintendo's own estimates, while the updated version — which you can tell from the original via its full-red packaging and its different model number, HAC-001(-01) — manages a much more convenient 4.5 to 9 hours. Make sure this is the version you buy today if you want the best Switch experience, but the battery life is the only difference between the two versions of the console.

In our Switch battery life test, Nintendo's claims seemed to be fairly accurate. Playing an eight-player game of Super Smash Bros. Ultimate until the console died, the launch Switch lasted 2 hours and 45 minutes, while the updated Switch managed 4 hours and 50 minutes. The Switch Lite made it to the 3:50 mark, for reference. All three versions of the Switch will last for plenty of time, but this test just confirms that the original Switch is outclassed by the new Switch and the Switch Lite.

The Nintendo Switch had a very strong start back in 2017 and has only grown stronger since then. More and more non-Nintendo developers are flocking to have their games appear on the platform, and Nintendo has addressed many criticisms of the launch-day console with a new, cheaper form factor in the Switch Lite and an upgrade to the battery life.

You'll have to accept a loss of graphical capability if you play on the Switch instead of a rival console, and Nintendo's online service, with its confusing features, may accidentally trick people into buying it when it's either unnecessary or unhelpful for the games they play. It's also unfortunate that Nintendo discounts its products so infrequently. It's rare you'll find the Switch on sale, and when it is, it tends to disappear very quickly.

A large group of Switch players decided to buy the console as soon as they knew it was a Nintendo product, due to the build quality and exclusive game franchises that are synonymous with the company. That said, the Switch has one of the widest third-party game libraries ever found on a Nintendo console. Even if you aren't a fan of the first-party Nintendo games, being able to enjoy your favorite RPG, shooter or strategy title on a console that you can play anywhere is a tempting offer. It's for these reasons that the future still looks bright for the Switch, even as Microsoft and Sony look to release the PS5 and Xbox Scarlett consoles by the end of 2020.