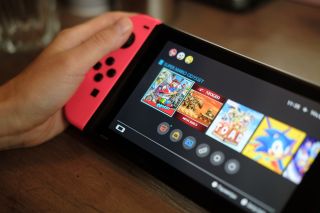 At full price, the new Nintendo Switch (with extended battery) costs $299, so don’t spend more than this unless you’re getting extras thrown in as part of a bundle deal. Also, bear in mind that there are currently two models on sale.

Nintendo released an upgraded Switch in August with an improved battery life (it’ll last a maximum of nine hours, rather than 6.5). The upgraded Nintendo Switch costs the same as the original model, so make sure you’re buying the newer version to get the most bang for your money. You can spot the new console from its packaging: the upgraded Nintendo Switch box has a red background, whereas the original model has a gray background.

The Editor's Choice Nintendo Switch Lite retails for $199. It's smaller and lighter than the traditional Switch which makes it even more portable. We love the Switch Lite's gorgeous, comfortable design, good battery life, and stellar game library. The Switch Lite is available in three colors: gray, turquoise, and yellow.

Standalone Nintendo Switch deals tend to sell out in record time. That's why we recommend you buy a Nintendo Switch bundle to get the best value. Some bundles are priced the same as the standalone Switch console, so you're getting a free game out of the deal. Other Switch console bundles throw in accessories like a carrying case or microSD card for less than the cost of buying each item separately.

LEGO Marvel Super Heroes 2: was $59.99 now $19.99 @ Walmart
Battle with your favorite super heroes and villains like Guardians of the Galaxy, Spider Man, Thor, Hulk and more. Add it to your Switch game collection for now and save $40.View Deal

Mario + Rabbids Kingdom Battle: was $59 now $19.99 @ Amazon
This delightful and surprisingly deep strategy game is one every Switch owner should play. Kingdom Battle stays true to both franchises and mashes together Mario's colorful worlds and the Rabbids' potty humor.View Deal

Mortal Kombat 11: was $59.99 now $29.99 @ Walmart
MK11 is the biggest, bloodiest, and best Mortal Kombat yet. This latest installment of the series features an overhauled fighting engine and an immersive story mode. Get it now for 50% off at Walmart. Amazon also offers this deal. View Deal

Yoshi's Crafted World: was $59.99 now $49.99 @ Amazon
Jump into a new Yoshi adventure in a world made of everyday objects—like boxes and paper cups! Get it from Amazon now and save $10. View Deal

Star Wars Pinball for Nintendo Switch: was $29.99 now $19.93 @ Walmart
This Star Wars pinball game features iconic characters, locations, and themes from the franchise. Choose from 19 pinball tables or challenge yourself in Career Mode. Own it now for $10 off. View Deal

Retailers are offering some of the best Switch accessories at a discounted price. Walmart continues to offer the Joy-Con controllers for $66.99 ($12 off). These detachable controllers can be used in handheld mode, turned into a standard controller with a Joy-Con grip or used as two mini controllers, so it always helps to have an extra pair for multiplayer Switch games.

Hestia Goods Nintendo Switch Carrying Case: was $25.99 now $11.39 @ Amazon
This hard shell protective case will keep your switch and accessories organized and safe. Amazon has it on sale for $15 less than its regular price via in page clickable coupon. View Deal

Starlink: Battle for Atlas Starter Pack: was $59.99 now $5.99 @ Best Buy
In this exclusive Switch Play game, Team Star Fox joins the battle as the adventurous Fox McCloud. For a limited time, it's just under $6 at Best Buy. View Deal

Nintendo Switch Joy-Cons (Gray): was $79 now $69 @ Amazon
Each Switch Joy-Con has an accelerometer and a gyro sensor built-in. They may be used individually or as a pair and deliver over 6 hours of battery life depending on the game. Grab a pair now for $10 off.