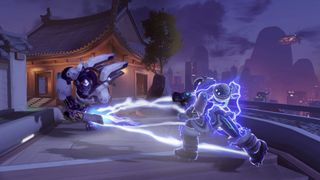 Overwatch has finally landed on Nintendo Switch, allowing you to take Blizzard’s popular online team shooter on the go (as long as “on the go” means “anywhere with Wi-Fi,” that is). But how does the game hold up compared to its PS4, Xbox One and PC counterparts?

Fortunately, Overwatch makes a mostly smooth transition to Nintendo’s hybrid portable console, delivering the same frenetic 6-on-6 objective-based action with some minor performance sacrifices. Here’s what we like (and don’t like) about Overwatch on Switch after a few days with Blizzard’s big port.

Like most Switch ports of AAA games, Overwatch’s visuals have been toned down a bit in order for the game to run well on Nintendo’s relatively underpowered hardware. But unlike ports such as Wolfenstein II: The New Colossus or Mortal Kombat 11, the difference between Overwatch’s PS4/Xbox One and Switch versions isn’t a jarring one.

I noticed some decidedly lower-resolution textures when running around maps such as Route 66 and King's Row, but overall, the game’s colorful, Disney-esque art style still popped in both docked and handheld mode. This is likely due to the game's clean, not-overly-demanding visual style, which is known to hold up well even on laptops with integrated graphics.

Overwatch runs at 720p in handheld mode and 900p in docked mode, but more significantly, the action moves at 30 frames per second no matter how you play. While that’s a step down from the 1080p/60fps you’ll find on PS4 and Xbox One (and whatever blistering settings your gaming PC can muster), I found the Switch port to still be highly playable.

I didn’t notice any major framerate dips during my time with Overwatch on Switch, even as my team and a group of enemies got in a massive firefight to take over an objective. The lower framerate was a bit more noticeable when playing in docked mode on a big screen (where I’m used to the 60 fps from the Xbox One version), but I’ll take a consistent 30fps over a framerate that jumps up and down wildly.

Overwatch does have one strange, significant quirk on Switch: players will occasionally spawn as red orbs of light at the start of a match (possibly due to character models taking longer to load on Switch). I found that this problem usually resolves itself by the time my team and I started heading towards the objective, but I did load into one match mid-game in which I was literally shooting at a bunch of red circles. The red orb problem seems pretty widespread, so here’s hoping it gets addressed in a future patch.

Of course, Overwatch on Switch is also made unique by the fact that you can play it in handheld mode on your Switch or Switch Lite. I found playing on my standard Switch to be mostly comfortable, but as I’ve experienced with Fortnite and other shooters, my hands did cramp up a bit when trying to take down enemies with the Joy-Cons’ tiny analog sticks and buttons. My colleague and avid Overwatch player Phillip Tracy reported having similar problems.

Fortunately, this issue is alleviated slightly thanks to gyro controls, which are exclusive to Overwatch’s Switch version. Like in other Switch shooters such as Splatoon 2 and Doom, you can aim by simply tilting your console (or Pro Controller), giving you the kind of mouse-like immediacy you simply won’t get on a controller.

I found the game’s motion controls to be useful for quickly aiming at enemies above and below me, and can see myself playing with them on for good. There are included gyro presets for handheld, controller and detached Joy-Con play, and like other versions of Overwatch, a slew of control customization options (including the ability to set unique control schemes for each hero).

It’s worth keeping in mind that Overwatch is an online-only game, so while it holds up well in handheld mode, you won’t be getting any training sessions in on the subway or in an airplane.

I do wish that Overwatch on Switch had cross-play with other platforms (at least for casual matches), or at least cross-save for keeping your progress and unlocked skins across platforms. This is an issue with Overwatch as a whole and not just the Switch port, but it’s a bummer having to start over after dumping dozens of hours into the Xbox One version over the past few years.

Overwatch on Switch is, well… Overwatch on Switch. The core of Blizzard’s beloved online shooter remains perfectly intact on Nintendo’s console, with the same addictive class-based gameplay, 30 playable heroes and bonanza of competitive and casual game modes you’ll find on other platforms. The Switch-specific perks, such as handheld play and gyro controls, don’t hurt either.

Even with a lower framerate and resolution, Overwatch is one of the best Switch games out there for folks who want a robust multiplayer shooter on Nintendo’s console, or those who want a way to practice when they’re away from their PS4, Xbox One or PC. But if you’re a competitive Overwatch player who needs to be able to play at 60 fps, this version isn’t for you.

Of course, it’s impossible to talk about Overwatch without talking about its developer Blizzard, who have made headlines recently for punishing its esports players that have spoken out in support of the Hong Kong protests. While these actions don’t impact Overwatch directly, they’re worth keeping in mind the next time you consider buying a Blizzard product.