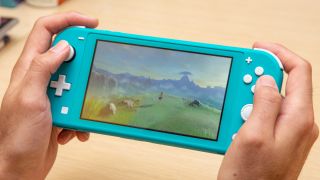 The new Nintendo Switch Lite is designed to be played exclusively as a handheld, which means that battery life is more important than ever. Nintendo’s smaller, cheaper Switch is rated for 3 to 7 hours of on-the-go runtime, which is a little bit better than the original 2017 launch Switch but not as long as the 4.5 to 9 hours that the Nintendo Switch 2019 refresh promises.

But how does the Switch Lite’s battery life translate in real-world use? We ran a very scientific test involving lots of Smash Bros. to find out.

Much like we did with last month’s Nintendo Switch 2019, we tested the Switch Lite’s battery life by running an endless Super Smash Bros. Ultimate match with 8 CPU characters. To ensure maximum chaos and push the new Switch to its limits, we turned CPU difficulty all the way up, set items to high and turned stage morphing on.

The result? About 3 hours and 50 minutes of continuous Smash. That’s pretty solid, and within the Switch Lite’s rated battery life. The Lite lasted longer than the OG Switch on our test (2:45), but was outperformed by the 2019 Nintendo Switch by an hour (4:50).

If having the absolute best battery life in handheld mode is a priority, you might want to look into the latest version of the standard $299 Nintendo Switch. But if you’re a portable gamer and go with the $199 Lite, you’ll be getting a nice bump over the launch model. Either way, we recommend you grab one of our best portable charger picks to extend your playtime on long trips, and our picks for the best Nintendo Switch Lite accessories to make the most of your new system.