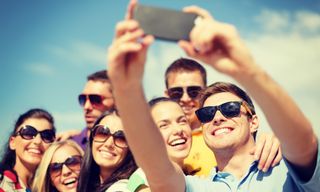 Google's computational photography enables incredible zoom and night shots — though the lack of an ultrawide lens holds the Pixel 4 back somewhat.

With four lenses on the back and the ability to use the phablet's S Pen as a remote shutter, the Note 10 Plus is prepared for any photo op.

Everyone wants a smartphone that can take great photos. After conducting in-depth testing and photo comparisons, the triple-lens iPhone 11 Pro and Pro Max are the best mobile cameras on the market today.

The latest batch of premium iPhones improve upon 2018's iPhone XS and XS Max by adding an ultra-wide lens for stunning landscapes. But it's not just about hardware — these new handsets can pull off remarkable low-light shots with Apple's advanced computational photography techniques. Meanwhile, iPhone users that want a similarly high-quality photo-taking experience for less can save $300 and spring for the dual-lens iPhone 11 instead.

On the Android side, the Pixel 4 and Pixel 4 XL lead the pack, thanks to their clever use of artificial intelligence to improve images taken with the phones' wide-angle and telephoto lenses. Meanwhile, those on the hunt for an especially versatile mobile camera will want to take a look at Samsung's quad-lens Galaxy Note 10 Plus.

Those who really want to maximize their mobile photography, yet spend as little as possible are well advised to check out Google's Pixel 3a, one of the best Android phones out there, thanks to its phenomenal image quality in a package that costs half as much as the company's own flagships. It's far and away our pick for the best budget camera phone, though if you're limited to $300 or less, Motorola's long-lasting G7 Power captures adequate shots for the price.

While a lot of our top picks take excellent photos in low light, you can get even sharper shots if you attach your phone to a tripod. To that end, we've compiled a list of the best iPhone tripods, which will also work with other smartphones.

Phenomenal low-light performance, varied perspectives and an unrivaled interface make it the best

The iPhone 11 Pro and Pro Max incorporate ultra-wide angle and telephoto lenses, though those are the least of the enhancements Apple has made to its newest flagships. The real work has been done in software, where the new iPhone's computational photography and video capabilities have been stepped up massively. Apple's Night Mode sets a benchmark for low-light photography within the industry, while the company's Smart HDR technology utilizes a breakthrough machine learning technique called semantic rendering to selectively over- or underexpose specific areas of the scene differently. For example, highlights in a subject's face might be left mostly intact, while highlights in the background are reduced more aggressively.

On the video front, all three of the iPhone 11 Pro's rear cameras can record at 4K resolution and 60 frames-per-second, and even the front-facing shooter captures slow motion clips for dynamic and dramatic "slofies." Both the regular 5.8-inch model and the 6.5-inch Max variant feature the same cameras, while the cheaper 6.1-inch iPhone 11 ditches the telephoto lens, but can still capture the same quality photos otherwise.

The Pixel 3 was a revolutionary mobile camera, in that it proved to the world that cutting-edge computational photography techniques could take smartphones far beyond the limitations of their hardware. The Pixel 4 and Pixel 4 XL double down on that belief, with two shooters — a 12.2-MP wide-angle and a 16-MP telephoto — that work in concert to deliver phenomenal images in all conditions. A new machine learning-based white balance feature corrects for strong color casts in even the most challenging scenarios, while a Live HDR+ feature allows users to see the final, processed result in real time, before they tap the shutter button.

Google has boosted its Super Res Zoom technology as well. Combined with the focal length advantage of that telephoto lens, the Pixel 4 can capture images at up to 8x power digitally that look nearly as good as what an optical lens would produce. We still believe the iPhone 11 Pro is better suited for shallow depth-of-field portraits, and that Apple's ultrawide camera unlocks potential the Pixel 4 can't realize. But in most other respects, Google has once again delivered an all-time great smartphone camera here, and certainly the best you'll find in any Android phone.

The Galaxy Note 10 Plus can do it all. Need a shallow depth-of-field portrait? The phone's telephoto lens and time-of-flight depth sensor are perfect. How about a landscape shot? The 117-degree field of view offered by the phablet's ultra-wide lens was made specifically for that purpose. At the center of the quad-lens rear camera stack is a 12-MP sensor, primed to expose any scenario properly thanks to a variable aperture system borrowed from Samsung's other flagship, the Galaxy S10.

The Note 10 doesn't always capture our favorite-looking images; it has a predisposition for slightly flat, subdued photos that prioritize over-brightening shadows rather than preserving realistic contrast. However, this 6.8-inch device really is the jack-of-all-trades of flagship camera phones. Its S Pen can be used as a remote shutter, for example, which is tremendously useful when using a tripod, or setting up a photo from afar. And Samsung's Scene Optimizer technology incorporates artificial intelligence to identify certain subjects and tune colors and lighting appropriately, for delicious shots of food and adorable portraits of your pets.

The Pixel 3's AI camera tricks for half the price

Midrange phone makers have had to step up their game ever since Google's $399 Pixel 3a arrived in the middle of last year. Boosted with the same computational photography software that powers the $799 Pixel 3, as well as an identical 12.2-megapixel sensor and a similarly high-end Qualcomm Spectra image signal processor, the 5.6-inch Pixel 3a can pull off shots that are nigh indistinguishable from Google's other handsets that are twice as expensive. It also comes with the firm's latest cutting-edge imaging modes, like Night Sight for amazing shots in the dark, and Super Res Zoom that delivers digitally zoomed images that are shockingly similar to what you get from devices with 2x optical zoom lenses. For $400, no other camera phone comes close — not even Samsung's triple-lens, $349 Galaxy A50 — though if you'd prefer a larger handset, the $479 Pixel 3a XL stuffs all the same hardware into a larger 6-inch body with a bigger battery to match.

A decent camera to go with phenomenal battery life, all for less than $250

No, the lone 12-MP lens on the back of the Moto G7 Power won't take unbelievable photos that are going to make you question spending hundreds more on a true, multi-lens flagship. That said, if all you have to spend is $250, you could do so much worse. The G7 Power can be heavy-handed with its image processing sometimes, and it struggles in low-light, as most cheap handsets do. But when conditions are ideal, it's not too shabby. Don't sweat the lack of a second camera for depth effects, either — those always tend to produce poor portraits on budget handsets anyway.

Fortunately, Motorola's easy-to-use camera interface and stock inclusion of the Google Photos app ensures a flagship-caliber software experience, despite the handset's bargain price. And although it has nothing to do with photography, the G7 Power's unbelievably long-lasting battery alone should make it worthy of your attention.

How We Test Smartphone Cameras

We put the market's leading handsets through a variety of common shooting situations, such as landscapes, portraits and selfies in daylight and at night. Then, we analyze each set of images on a color-calibrated monitor to see which smartphone had the best combination of color accuracy, clarity and contrast. We also perform in-depth camera comparisons between the top phones, using each handset in their auto mode to take a wide range of photos in different conditions. After declaring a winner in each round, we name an overall winner of that face-off.

In each of our smartphone reviews, we also factor in any special features, such as dual lenses and what they enable, Portrait Modes, and other special modes, before we come to a conclusion.