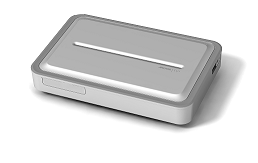 Jack of All Media

You can’t avoid comparing the Archos TV+ to the Apple TV; even the styling of the white box evokes Apple, and you wouldn’t be embarrassed to put this next to your TV. The remote control doesn’t match the sleek look, though: in addition to a full QWERTY keyboard, it has a trackpad with left and right mouse buttons, an extra button for dragging a selection around, plus a four-way controller with an OK button, a menu button and assorted extra navigation buttons. Despite the many buttons, the layout is intuitive, and the light weight and curved back make it comfortable to hold in both hands. The size of the remote also gives it room for a large infrared transmitter, so you don’t have to point it straight at the TV+ box.

The Archos TV+ remote may not be elegant, but it’s practical and easy to hold.

Connecting the TV+ is simple; you plug the SCART or HDMI output cable into your TV and the SCART input cable into your set-top box or VCR. The TV+ display appears on the TV, and guides you through choosing the correct settings; this is also simple if the TV+ sets up your TV correctly first time, which it did on both the models we tested (an elderly Sony CRT and a more recent LCD flat screen TV). One issue is that the 576p resolution of the TV+ won’t fill the screen on some 16:9 widescreen TVs; Archos promises a 720p plug-in to deal with this.

Connecting to your wireless network is also straightforward, and the full QWERTY keyboard on the remote makes it easy to type in security keys.

The run of connectors on the back of the Archos TV+: stereo audio RCA in and out, composite, S-Video, component video in and out, HDMI-out, and Ethernet-plus USB ports on the side.

Next Page Complexities and Cost