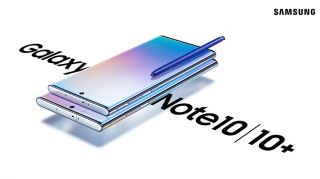 Samsung's Galaxy Unpacked event is less than a day away, but the company still can't stem the Galaxy Note 10 leaks. This time, basically every marquee Note feature can be seen in a set of leaked marketing materials obtained by Droid Life.

The images show what looks like the 6.3-inch Galaxy Note 10 and 6.8-inch Note 10 Plus, which both sport camera cut-outs stamped top center of the display.

Even more importantly than the new camera placement is the S Pen's new powers, which Samsung will reportedly call Air Gestures, according to the promotional images. Samsung's Note stylus will be able to perform tasks without touching the screen, akin to a "magic wand." The materials don't detail what air gestures will be supported at launch.

Note 10 buyers will be able to use the S Pen as a remote control for taking photos, including switching between camera lenses, and will be able to convert handwriting to text.

Battery improvements are also in store, if the features outlined in the leaked images prove true. The Note 10 will offer Superfast Charge for providing the phone with hours of battery life after only a few minutes of charging time.

According to Droid Life, the leaked promo materials even show the prices for Samsung's newest flagships: $949 for the smaller Note 10, and a whopping $1,099 for the Note 10 Plus.

So now that we know basically everything there is to know about the Galaxy Note 10 and Note 10 Plus, we'll be on the ground in Brooklyn bringing you any surprises in store from Samsung's Galaxy Unpacked event Wednesday (Aug. 7).