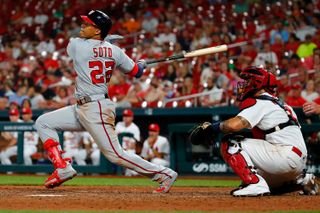 The Washington Nationals have dominated the National League Championship Series (NLCS) so far, using great starting pitching to shut down the St. Louis Cardinals. And now they're one win away from the World Series.

Whether you're hoping to see the Nationals bring the first pennant to Washington DC in 86 years or you think the Cardinals can mount a comeback (or at least force a Game 5), you're not going to want to miss a moment of Game 4 tonight (Oct. 15). Here's how to live stream that Nationals vs. Cardinals game as well as the rest of the NLCS.

When can I watch the National League Championship Series between the Nationals and Cardinals?

The NLCS kicked off last Friday, with the Nationals winning Games 1 and 2 over the weekend. The series has shifted to Washington, but that hasn't stopped the Nationals' momentum. Game 4 starts at 8:08 p.m. ET/5:08 p.m. PT tonight, with Game 5 slated for Wednesday if St. Louis gets the win tonight.

One note about that potential Game 5. It's currently slated for 4:08 p.m. ET/1:08 P.m. ET. But with rain threatening to wash out Game 4 of the American League Championship Series between the New York Yankees and Houston Astros, Major League Baseball may shift the Nationals-Cardinals game to the night time if the ALCS contest is washed out. Check your local listings for when Game 5 actually takes place.

TBS is airing all of the NLCS games, so if you have a cable subscription you're all set. Here's the schedule for the remaining NLCS games between the Nationals and Cardinals.

How can I use a VPN to watch Nationals vs. Cardinals in the NLCS?

Out of the country when the NLCS games are underway? Use a virtual private network, or VPN. A VPN can make it seem as if you're surfing the internet at home, even if you're traveling. With a VPN, you can access the same services you would be able to at home, including any live streaming options for the October MLB games.

We tested many different offerings, and we think best overall VPN is ExpressVPN. In our testing, it had the best mix of performance and customer service, and the price is pretty attractive, too, especially if you're able to sign up for extended service. But you've got other VPN choices as well — here is more information about some of our favorites.

ExpressVPN: ExpressVPN can access more than 3,000 servers spread out across 160 locations in 94 countries so you'll be able to find a connection most of the time. You'll also get reliable customer service from ExpressVPN if you run into any trouble.

NordVPN: Go with NordVPN if you value privacy, as the service uses 2084-bit encryption. It also works well with streaming services — handy if you want to catch a baseball playoff game. NordVPN costs $11.95 per month, you can cut that down to $2.99 per month if you sign up for a multi-year service plan.View Deal

TunnelBear: It's not the best-performing VPN by far, but TunnelBear is a good choice if you just need a VPN for a week's worth of NLCS playoff games. TunnelBear has a cheap monthly price ($9.99), and it's friendly enough for novices to use.View Deal

How can I live stream Nationals vs. Cardinals games during the NLCS?

If you've got a cable subscription, you can head to the TBS Sports website or the Watch TBS app (Android, iOS) on your smartphone or tablet. Either option will carry a live stream of the NLCS games, so you'll be able to watch the action even if you're not near a television set. You will need to sign in with login credentials from a cable or satellite TV provider, so if you've cut the cord on cable, you'll need to consider different streaming offerings.

MLB.TV also carries postseason games, though you'll have to pay $25. (That fee also lets you stream spring training games before the start of the 2020 Major League Baseball season.) However, MLB.TV also requires you to sign in with a cable TV provider, so this isn't an option for cord cutters, either.

How can I live stream the NLCS games between the Nationals and Cardinals without a cable subscription?

Signing up for a streaming service is one way to beat the high cost of cable and still enjoy live sports. You can watch channels that regularly air games through most popular streaming providers.

Here's a list of the streaming services where you're able to catch all the NLCS games (and the ALCS games, too.)

AT&T Now: The service formerly known as DirecTV starts at $50 a month, and this Plus package includes TBS.View Deal

Fubo.TV: A streaming service with a focus on live sports, Fubo.TV starts at $55 a month and includes TBS among its channels. A cloud DVR feature lets you record certain MLB games to watch later.View Deal

PlayStation Vue: The streaming service's entry-level Access package starts at $50 a month, and includes TBS. More sports channels are included in the next tier, which costs $55 a month.View Deal

Sling TV: Sling TV is a worthwhile option for watching tonight's game. The Orange package includes TBS and costs $15 for the first month. (The monthly rate rises to $25 after that.) And it's possible to try out the service for a week at no cost.

YouTube TV: You'll find TBS among the 70-plus channels YouTube TV includes for $50 a month. And YouTube TV is another streaming service that boasts a cloud DVR feature.View Deal

What to watch for in the Nationals-Cardinals series?

By beating the Los Angeles Dodgers in the divisional series and the Milwaukee Brewers in the Wild Card game, the Nationals are the first Washington DC-based baseball team to win a postseason series since the Washington Senators won the 1924 World Series. The last time the Nationals franchise made an NLCS, the team was based in Montreal, and the Montreal Expos never reached a World Series.

The Cardinals are looking for their first pennant since 2013. They last won the World Series in 2011.

The story of the series thus far has been pitching, with Anibal Sanchez, Max Scherzer and Stephen Strasburg of the Nationals shutting down St. Louis so far. Patrick Corbin gets the start for Washington in the potential series clincher; he'll face Dakota Hudson of St. Louis in tonight's Game 4.

Washington won the first two games of the series on the road in St. Louis. Twenty-five other teams have pulled off that feat in best-of-seven series and 22 have gone on to win the whole thing. Meanwhile, the Cardinals will be looking to emulate the Boston Red Sox, who were down three games to none in the 2004 ALCS before racing back to win the pennant. (Boston's opponent in the World Series that year? The St. Louis Cardinals.)