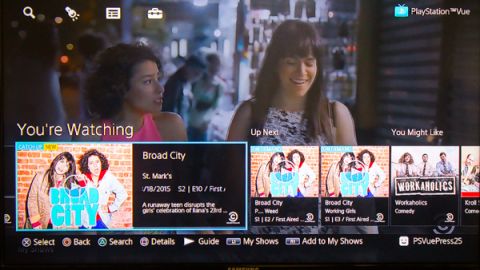 Thanks to its intuitive interface, superior discovery features and powerful DVR, Sony PlayStation Vue is our favorite cable replacement yet.

UPDATE, 10/29/19: In spite of PlayStation Vue's excellent performance and myriad channels, Sony will soon shut down the service. This review will stay live for posterity, but be aware that this is not a product you'll be able to buy for much longer. Instead, it may be worth looking into Sling TV.

It's a national pastime to hate cable and satellite companies, especially with their rising monthly fees. So cord cutters are looking to the Internet for cheaper TV, ideally with better features than cable provides.

Sony has taken up the challenge with PlayStation Vue, an online service with packages ranging from $50 to $85 for about 45 to 90 channels that roughly match the channel lineup of cable. PlayStation Vue's biggest strengths are its nearly limitless cloud-based DVR and the ability to find new shows and movies based on your tastes or what's popular among viewers. Sling TV is cheaper, but Sony's service gives you more to watch, especially local sports and news.

In fact, Sony’s service beat both Sling TV and DirecTV Now in our head-to-head face-off.

Looking at the channel lineup for the base, $50 Access option, I had a hard time figuring what else I'd want in 200-channel cable and satellite packages. Most of the major "cable TV" channels are included, among them, AMC, Cartoon Network, CNN, Discovery, Food Network, Fox News, FX, MSNBC, Syfy, TLC, Travel Channel, USA and VH1. You also have access to ABC, Fox, NBC and CBS for primetime shows and local sports and news. However, A&E, MTV and the CW are notable no-shows.

If you want more viewing options, the $55 Core option adds additional sports channels, and Elite includes everything in Core plus about two-dozen niche channels for $65 each month. The $85 Ultra package adds premium channels such as Showtime and HBO. All four have the same search, DVR and other capabilities; only the number of channels differs.

PlayStation Vue is currently available across all 50 states in the U.S. You can watch it on just about any device that plays streaming video, including a PlayStation 3, PlayStation 4, Apple TV, Amazon Fire TV, select Android TVs and any Roku device, as well as on the web via your PC or Mac.

You can watch the service on the go via the PlayStation Vue Mobile app for iOS and Android, which allows you to access a select group of channels that includes FOX, ABC, CNN, ESPN, HBO, Showtime and TNT. You can also use this app to cast PlayStation Vue to your Google Chromecast.

Sling TV and DirecTV Now are both far less limited in this regard, as their respective mobile apps allow you to stream every channel in your plan no matter where you are. DirecTV Now even lets you save your DVR shows to your mobile device.

Value: Not cheap, but you’ll likely save money

On a channel-per-dollar basis, it's still hard to beat cable. But not all channels are worth as much to viewers. If the Vue selection does the trick, you will save money — depending on the offerings in your area. In New York, Spectrum (formerly Time Warner Cable) offers a TV Gold and Internet package with 200+ channels and 100 Mbps downloads for $129.98 per month, including DVR and modem rental, taxes, and fees. (New York tends to have a lot more channels than most other cities.)

Just the Internet part is $44.99. That plus PlayStation Vue's basic plan gets you to about $9, which saves you a significant chunk of cash. Plus, you don't have to sign a one-year contract.

Verizon FiOS is a bit harder to compare. It offers 50 Mbps Internet for $54.99 per month if you sign a one-year contract. But Verizon offers a lot when you upgrade to TV service. Verizon's Preferred package has over 255 channels, including ESPN and Fox Sports channels, for $94.99 per month (with all fees and taxes). That's roughly the same price as just Internet and PlayStation Vue, so whether or not you save money depends on what you want to watch.

MORE: Why I Dumped Sling TV for PlayStation Vue

PlayStation Vue's biggest contribution to TV is not price or channel lineup, but design and features. Vue has a straightforward interface that you can master in a few minutes, and it deftly slips features such as DVR settings into the flow.

You start navigating by pressing the red-circle button on the right side of the PS3 or PS4 controller. With that, an overlay on about the bottom half of the screen displays six menu levels: Timeline, My Shows, Favorite Channels, Live TV, Recommended for You and Featured Shows. Aside from mixing pronouns, the levels are logical, and you'll probably just use a few that you like best.

Timeline displays a box with an image, title and description of what you are currently watching. Scrolling to the right first displays boxes for what will air next on that same channel, and then recommendations for similar shows and movies under the heading You Might Like. Scrolling to the left, you see what you've watched previously, on any channel.

Any series or movie in My Shows is automatically recorded to Vue's online DVR (more about that later).

Favorite Channels is the same general idea. It starts by showing the channels you've recently watched and allows you to select one with the X button and then press R1 to add that channel to the list. This feature allows purposeful channel surfing. Of the 50 channels offered, I'd probably watch only 10 or fewer. I made a custom lineup with standbys such as FX, Fox and NBC.

Live TV lets you scroll right and left through everything that's airing at the moment, for old-school channel surfing. Recommended for You displays, no surprise, recommendations based on your viewing. The Featured Shows menu displays what Sony wants to highlight.

MORE: The Best TVs For Every Budget

PlayStation Vue provides a virtually limitless DVR. Adding programs to My Shows sets the online DVR to record every episode in up to 500 TV series. (It will also record selected movies when they air.) Recordings expire after 28 days, but in a way, that's a relief. Otherwise, you'd soon have tens of thousands of shows to watch.

You can pause, rewind and fast forward through these recordings as with any other DVR, which means you can skip past the commercials.

PlayStation Vue's DVR is a huge advantage over Sling TV, whose DVR feature is currently in closed beta and will have a wider launch sometime in 2017. Sling makes some previously aired shows available on demand, but coverage is spotty.

Search and Recommendation: Making it all manageable

My favorite PlayStation Vue features were the search and recommendation tools, which kept me from drowning in the channel surf. Vue has two levels of search. One, accessed by clicking a magnifying glass icon in the upper left of the screen, lets you search by title of a show, with a twist.

Click "B," for example, and you don't first see Being Mary Jane. You see The Big Bang Theory, The Blacklist and Bones: the most popular shows that start with "B." This will get a lot of people to what they want faster, but it's no favor to people who don't watch all mainstream shows.

The killer search-app is Explore, which you access by clicking the flashlight icon at the top of the screen. This tool is for those times when you're not looking for a particular show or movie, but for the kind of content that suits your mood. All you have to do is use a few filters: Category, Genre, Content Length and Channels.

I started my search with 2,173 possible things to watch. Selecting TV Shows under Category got me down to 1,405 (other options include Movies, Sports and News). Selecting the Comedy Genre narrowed my choices to 209. A Content length of "<30 min" brought my options to 171. Finally, Age Ratings of TV-MA and Not Rated left me with 21 options to peruse. That was enough filtering for me, but I could have also narrowed down by specific channels and sorted by criteria like Popularity or Channel A-Z.

The Explore feature is something between pure channel surfing, where you often find nothing, and traditional search, where you find only what you already know about. It's a much smarter way to find something to watch.

With 50 Mbps download speeds from Cablevision in Brooklyn, I had few problems with PlayStation Vue. Video played smoothly, and sound was clear. One annoyance was that the video often froze in the first few seconds of a show or movie, after which the show would restart and play fine. Switching from one show to another took three to four seconds, which wasn't a bother.

With a robust channel selection, intuitive interface, DVR functionality and a variety of ways to watch, PlayStation Vue is our favorite online TV service for cord cutters. Using search, recommendations and just browsing, I found way more to watch and record than I could ever get through cable, even though a few notable channels were missing. And what I did end up watching looked great.

Sling TV (starting at $25 per month) is a better option for folks on an extra tight budget. But if you can spare the extra cash, PlayStation Vue's feature set and channel selection is well worth it.