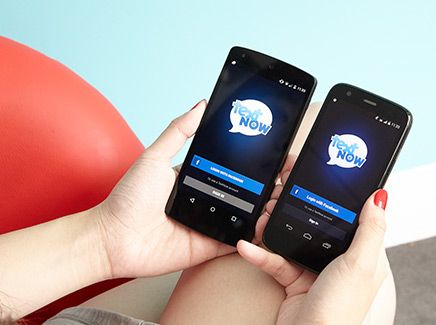 TextNow Wireless is an affordable way to get a phone line and use that number across many devices, but poor call quality holds it back.

Who it's for: Those who are looking to tighten their purse strings and who can live without high-speed data; parents looking for an affordable line for their kids.

Looking for a way to slash your phone bill — or give a phone to your child on the cheap? TextNow Wireless might suit your needs; it offers unlimited talk, text and (2G) data starting at just $19 a month. Its plans are so affordable because the hybrid carrier prioritizes Wi-Fi connections over cellular data, letting you make calls and send messages over Wi-Fi whenever available. Thanks to the company's app, you can also use your phone number to text and call friends from your iPod, tablet or laptop.

TextNow offers a fairly good phone selection and can help save you money, but the poor call quality and the hand-off issues between Wi-Fi and cellular give us pause.

TextNow calls itself a hybrid, cloud-based carrier. It blends together Wi-Fi and cellular networks to let you communicate with your friends. If the premise sounds familiar, that's because Republic Wireless and FreedomPop already do this. But TextNow is unique with its cloud-based approach, which lets you get a phone number just by downloading the app.

You could essentially turn an iPod into an iPhone by getting a U.S. phone number. But if you opt for one of TextNow's phones, you'll add the ability to text and call over a cellular connection. Since you can use this number to sign into TextNow on iOS, Android and browser-based portals, you can message your contacts from virtually any device.

When it's not on Wi-Fi, TextNow Wireless piggybacks on Sprint's 4G network, which we have found to be sluggish in many major American cities.

TextNow Pricing vs. Other Carriers

TextNow's Grande ($27 a month) offers 1GB of high-speed data (3G/4G), cheaper than Google's Project Fi, which offers the same amount of data, and FreedomPop's Unlimited Everything plan, which caps high-speed data to 1GB and drops to 128 kbps after that. Republic Wireless offers only unlimited data plans, but at various speeds, and its unlimited 4G plan costs $40 a month.

#BYOP = Bring Your Own Phone, which in this cases refers to compatible Sprint handsets

TextNow's starting price is higher than that offered by competitors, such as Republic Wireless' $5 a month for a Wi-Fi–only plan and FreedomPop's $10 a month plan with 1GB of 4G data. But TextNow is the only one of the lot to provide unlimited 2G data on all its plans.

TextNow is cheaper than Google's Project Fi, which starts at $20 a month for unlimited domestic talk and text and unlimited international texts but no high-speed data. Adding 1GB of data to your plan is also cheaper on TextNow ($27 a month) than on Fi ($30 a month).

The TextNow app replaces the Messages app in the phones the company sells, with this app becoming your main channel for contacting your friends. Even though there's a separate Dialer app, it redirects you to the TextNow screen after you make your call.

The TextNow app shows your conversations with your contacts in reverse chronological order, with the most recent at the top. You can send text, pictures (from gallery or camera) and emoticons (10 are preloaded in the app). You'll also see sent, received and missed calls on this screen.

Tapping the menu button at the top left lets you see your phone number, credits and bandwidth remaining. You can also access your profile, a TextNow store (to buy or earn call credits) and account settings.

With your username and password, you can sign into the iOS and Android apps or the browser-based client from your computer to call and message your friends. Once I signed in, the website displayed all my existing chats, making it easy to pick up where I left off in conversations. In each chat, you can send either texts or images (from your computer), and you can choose to allow the site to notify you of incoming messages.

The TextNow portal spent hours trying to verify my laptop's microphone, finally doing so a few days later after I reopened the site repeatedly. This also happened on my colleague's laptops, both PC and Mac.

After I reached out to TextNow about this issue, the company said it had fixed the bug. The verification occurred instantly once my colleagues and I reloaded the TextNow site. After your mic is verified, you can make calls from your desktop, which was surprisingly seamless during my testing.

Having recently added the Nexus 5 and Moto X to its selection of compatible handsets, TextNow has something for anyone, from the budget-conscious to the power user. The carrier also offers the first-gen Moto G (refurbished) at just $13.99, as well as refurbished units of the LG Optimus F3, Samsung Galaxy SIII and Galaxy S4 for $15, $80 and $200, respectively. The $250 Nexus 5 and $150 Moto X available are brand new, not refurbished.

According to TextNow, refurbished devices are phones that have either been returned by a customer or warranty repaired and repackaged. The company says it only carries certified refurbished phones that come with a 1-year warranty, which are eligible for users who have active TextNow subscriptions.

You can also bring your own qualifying Sprint phone to TextNow, as long as you're OK with making calls over 3G or 4G only (no 2G available). This means your call quality might be poorer when you're not on Wi-Fi.

By comparison, Republic Wireless offers only two devices: the Moto G (for $149) and Moto X ($399), and for much more money than TextNow. The Moto G on Republic is brand new.

FreedomPop offers four phones: the LG Viper 4G LTE ($99), Samsung Galaxy SIII ($169) and Galaxy S4 ($289), and the iPhone 5 ($299), making this the only such carrier to offer the iPhone. You can also bring your own device to FreedomPop, which offers tablets as well.

The Nexus 5 and refurbished Moto G we received from TextNow were not much different from their original counterparts that we had previously reviewed. There are no external signs like a logo to indicate this is a TextNow phone, which is nice.

On general performance benchmark Geekbench 3, the TextNow Nexus 5 scored 2,609, which isn't far off from the original unlocked Nexus 5's score of 2,689. The TextNow Moto G notched 1,060, just under the original Moto G's mark of 1,153.

Although TextNow prioritizes Wi-Fi, you don't want to be stuck with crawling data speeds when you're out of Wi-Fi range. That's what we saw from the 3G Moto G, but the 4G-enabled Nexus 5 fared better.

In my Hell's Kitchen apartment, the Nexus 5 (LTE) averaged a fairly good 8.7 Mbps for downloads and 8.1 Mbps for uploads on the Speedtest.net app, while the Moto G (3G) netted just 570 Kbps Mbps down and 650 Kbps up.

LTE speeds were slower in Union Square, where the Nexus 5 notched 4.7 Mbps down and 5.9 Mbps up. The Moto G saw better performance in this spot than in the previous location, getting 2 Mbps down and 1.1 Mbps up.

Trying to call someone on a TextNow phone was hit or miss. When making a call out over 2G (instead of VoIP), TextNow assigns a proxy number to each contact that you reach via the Dialer.

During our initial tests, the TextNow app was glitchy, often returning me to the home screen after I tried to place a call. Upgrading to the latest version of the app fixed the issue. TextNow says all its phones ship with the most updated build of the app and that Google should automatically update all apps once you are signed into your account and connected to Wi-Fi. If you experience similar problems to what I did, though, make sure to go to the Google Play store and get the Dialer app updated.

Even after I updated the app, however, calls didn't connect consistently. Out of the nine phones in our office that I tried calling, three failed to ring, even though I heard the ringing tone in the TextNow phone. Two phones took between 15 and 20 seconds to start ringing. The other calls connected immediately.

When a call did connect, it was like I was talking to someone from the bottom of a well. My colleague Sam's voice was so distorted that I thought I had accidentally called my editor instead, and Sam's voice sounded more nasal than it actually was. According to him, my voice would drop out every three words or so, and got worse when I went indoors.

On my end, I could hear Sam clearly when I was walking from Union Square Park toward my office, but I encountered dropped words every three words or so once I stepped into a Duane Reade pharmacy.

The same happened when I called Sam from a moving cab. When I got through, he said he could understand what I was saying. But to me, Sam sounded muffled and distorted, and there was crackling every 3 seconds or so.

On both occasions, I whipped out my iPhone 5s to call Sam over T-Mobile's network, and he reported hearing me much more clearly. Similarly, I could hear him better and he sounded like himself.

Switching Between Wi-Fi and Cellular

TextNow uses Wi-Fi when it detects that the connection is good enough, and if not, the service routes through cellular. The company's phones are supposed to switch seamlessly between the two. I tested how well this worked by calling my colleague Sam and walking in and out of Wi-Fi range while talking.

When switching from Wi-Fi to LTE, my call dropped altogether and I had to redial Sam. As I entered Wi-Fi range during a call that started on cellular, Sam said I went silent for 5 seconds before returning, but at least the call didn't get completely cut off.

TextNow said that switching from Wi-Fi to 4G or 3G VoIP is supported, but that handover from VoIP to 2G (cellular) voice is not yet available. The company said it's working on that feature and that once it's implemented, "there will be much less dropped calls."

It's not a perfect replacement for a full-blown carrier, but for those who are heavily dependent on texting and want the option of making calls over a cellular connection, TextNow is an affordable choice. I especially liked being able to use my number to text and call my friends from any other device, and the carrier offers a wider smartphone selection than its competitors. However, calls didn't connect consistently enough, and I experienced issues when moving from cellular to Wi-Fi and vice versa.

Heavier data users should consider Republic Wireless, which provides unlimited LTE data for just $40 a month, whereas TextNow offers at most 4GB of data at 3G/4G speeds for $60 monthly. Frequent travelers may prefer Google's Project Fi, which has coverage in about 120 countries and offers free unlimited international texts and high-speed data roaming at no extra charge. Google's service should also provide better coverage, thanks to its partnership with both T-Mobile and Sprint.

But for those looking for a good amount of data, a solid lineup of smartphones, and the ability to text their friends from their desktops or tablets, TextNow is a good value.

Cherlynn Low is a Staff Writer at Tom's Guide. When she's not writing about wearables, cameras and smartphones, she's devouring old episodes of Torchwood or The X-Files. Or taking selfies. Follow Cherlynn @cherlynnlow . Follow Tom's Guide at @tomsguide and on Facebook.