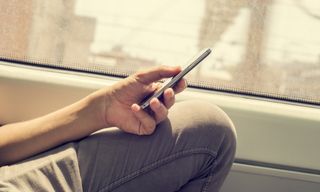 Smartphone batteries are getting larger and larger, with the promise of phones that can go all day on a single charge. But which devices can really boast that they provide the best battery life for phones?

In our battery test, we have phones continuously surf the web over LTE until they run out of juice. The average phone lasts around 10 hours, but the phones we’ve highlighted here held out for at least 11 hours.

The Moto G7 Power puts almost every other phone to shame when it comes to lasting a long time on a single charge. Motorola's budget phone set the new standard for phone battery life, lasting 15.5 hours on our battery test, thanks to its massive 5,000 mAh battery.

Here are all the top performers we've tested in the last year-and-a-half. If you want to protect your phone when charging, check out our roundup of the best surge protectors. And if you need even more battery life, check out our best portable charger picks.

Impressive as the G7 Power's battery performance is, Motorola's handset isn't the only device to hold out for more than 15 hours on our test. The Asus ZenFone 6 rode its 5,000 mAh battery to sneak past the 15-hour mark, too. Finishing in third is the newest entry to our list, Samsung's budget-priced Galaxy A20, which fell 14 minutes short of the 14-hour mark.

The top-performing flagship phone on our battery test is the Huawei P30 Pro, which ran out of juice just shy of the 13-hour mark. Huawei phones are hard to come by in the U.S., even before the U.S. government imposed sanctions on the Chinese phone maker, so more readily available flagship devices include the Galaxy S10 Plus (which happens to be our best Android phone) and the iPhone 11 Pro Max, both of which hovered around the 12-hour mark.

Two Google phones, the Pixel 3a and Pixel 3a XL, prove you don't need to pay flagship prices to get a long-lasting phone, however, as both those device approached 12 hours on our test.

We've capped our list to the 15 longest-lasting phones we've tested in the last 18 months. That excludes older phones like the ZenFone 3 Zoom, which topped 16 hours when we tested it in the first half of 2017, and the Cat S48c, a durable phone that lasted longer 13 hours. We've also omitted long-lasting phones like the Oppo Reno 10x Zoom and Huawei Mate 30 Pro that aren’t available in the U.S. but may still be on sale elsewhere (though Huawei's phone comes without Google apps, making it an even less appealing option for U.S. consumers).

When testing phones, we set each phone's display to 150 nits to normalize for brightness and make sure each handset is receiving at least three bars of service.

These days, battery life is more important than ever, thanks to the big screens, superfast processors and demanding apps we find on the latest phones. After all, what good is that advanced camera or high-resolution display if your handset is dead before the sun goes down? Here's a closer look at the phones that make the grade when it comes to all-day battery life.

You'd expect a phone with a 5,000 mAh battery to last a long time on a charge, and the Moto G7 Power doesn't disappoint. Its 15 hour, 35 minute time on our battery test is the best we've seen from a smartphone in the last two years. That's 7 hours longer than the standard Moto G7 lasted. Best of all, you don't have to pay up for all that battery life: the Moto G7 Power costs $249, a fraction of what you'd pay for flagship that poop out hours before this device.

The camera on the Asus ZenFone 6 will likely grab all the attention — it swivels around so that the same lenses pull off double-duty as both the front and rear cameras — but to us, the battery is the real story. The latest ZenFone lasted more than 15 hours on our battery test — not a surprise given the beefy 5,000 mAh power pack inside the ZenFone 6. Throw in fast charging and an efficient Snapdragon 855 processor, and that's a lot of power for a phone that starts at less than $500.

It may not have the flash and features of Samsung's more premium handsets, but if you're looking for long battery life, the Galaxy A20 delivers long-lasting performance for a low price. The phone lasted more than 13.5 hours on our battery test, thanks to a massive 4,000 mAh battery. Charge times are respectable, too, as the A20 delivers 15-watt charging that can get a drained battery up to 30% after half-an-hour of charging. You'll make some sacrifices for the A20's $239 price tag, but you'll get lots of battery life in return.

Nationwide & International Text to over 200 countries in the world
View Deal
at
Verizon Wireless
Boost Mobile US
No contract
Samsung Galaxy A20
$179.99
upfront
$35
/mth
Unlimited mins
Unlimitedtexts
3GBdata
View Deal
at
Boost Mobile
We check over 130 million products every day for the best prices
View All Deals
powered by

Thanks to 40-watt SuperCharge technology, Huawei's P30 Pro charges faster than just about any other smartphone — you can go from zero to 70 percent after 30 minutes of charging, Huawei says. Not that you'll need to charge the phone that often during the day: in our test, the P30 Pro lasted nearly 13 hours, thanks to a 4,200 mAh battery. Given the P30 Pro's photographic prowess, you'll never worry about being out of juice when it's time to capture the perfect shot with the phone's four rear cameras.

ZTE's return to the U.S. market isn't a complete success, but at least you can count on a very long lasting phone with the $199 Blade Max View. The 4,000 mAh battery in this budget phone helps the phone last nearly 13 hours on our battery test. Our one complaint about the battery: it takes a long time to charge. We tried several different USB Type-C adapters, but each time, it took us several hours to fully charge this phone.

The 4,100 mAh battery in Samsung's latest big-screen phone has no problem keeping that 6.4-inch Dynamic AMOLED display powered up throughout the day. We managed to get a little more than 12.5 hours of battery life when we put the Galaxy S10 Plus through our test. But a long-lasting battery is only part of the power management story with the S10 Plus. The new S10 phones offer a Wireless PowerShare feature that lets you wireless charge other device — yes, even iPhones — by placing them on the back of the S10.

If network is congested, users may notice reduced speeds / 600kbps mobile hotspot
View Deal
at
Verizon Wireless
We check over 130 million products every day for the best prices
View All Deals
powered by

Google's budget-minded smartphone may have slashed the price you pay for a Pixel, but that doesn't mean you have to skimp on battery life. The Pixel 3a lasted nearly 11 hours on our battery test, nearly matching the 12:09 time turned in by 2017's Pixel 2 XL, though you can get the 3a for much less and through more carriers. The Pixel 3a also charges quickly, giving you 7 hours of battery life after just 15 minutes of charging.

If you want the longest-lasting iPhone ever, get the iPhone 11 Pro Max. It benefits from a larger battery than the one inside 2018's iPhone XS Max (Apple doesn't officially say how big) as well as the more efficient A13 Bionic processor. Even better, iPhone 11 Pro Max users can finally take advantage of the iPhone's fast-charging support from the moment they open the phone's box. The iPhone 11 Pro Max ships with an 18-watt charger, which allowed us to get a drained phone up to 48% battery life after just 30 minutes of charging.

Sony's phones have a habit of landing on our longest-lasting list, and one of last year's flagships — the Xperia XZ2 — is no exception. Lasting nearly 12 hours on our battery test, it beat flagships from Samsung and Apple; only the Mate 10 Pro and Pixel 2 XL fare better among high-end phones. Two additional features on the XZ2 — Qnovo Adaptive Charging and Battery Care — figure to keep the Xperia's battery in top shape as the phone ages. Qnovo modulates charging based on the battery's health, while Battery Care learns your charging habits to reduce stress on the battery.

Recent LG phones haven't held up well on our battery test, but LG's G8X ThinQ Dual Screen is a welcome exception. This 6.4-inch smartphone lasted just shy of 12 hours on our test, and its $699 price makes it one of the more affordable flagship phones you can buy. One caveat about that 11 hour, 49 minute result, though: it came using just one of the G8X's screens, and not with the second 6.4-inch removable displayed attached to the phone. Running the test with both of the phone's screens enabled, we got a far more pedestrian 4 hours and 56 minutes. (Not surprising, since the G8X's second screen has no battery of its own.) Having two screens is a nice productivity booster, but use it too much and it can drain your phone's battery.

to/from the US, Canada & Mexico

The larger of Google's new midrange phones doesn't last quite as long as the 5.6-inch. But the 6-inch Pixel 3a XL still turned in an 11:44 time on our battery test, topping pricier flagships from Apple and Samsung (not to mentioning beating Google's own Pixel 3 XL). Like the 3a, the Pixel 3a XL recharges quickly. After we drained the battery and charged the phone for 15 minutes, its battery indicator was back up to 22 percent.

Motorola's tradition of delivering superior battery life continues with its latest flagship phone. The Moto Z4 features a 3,600 mAh battery, an increase from the 3,000 mAh power pack in last year's Z3, and that helped the new model last just past 11.5 hours on our battery test. You'll also get 15-watt charging, which isn't as fast as the 18W charging some phones offer, but still should help you charge up the Z4 fairly quickly.

Apple’s colorful iPhone is also a longest-lasting one. Until the iPhone 11 Pro Max came along, the iPhone XR boasted the best time ever for an Apple device on our battery test, matching the 11:26 time of Samsung’s Note 9 while costing a lot less. With a new iPhone 11 lineup out now, the iPhone XR is even cheaper at $599, so you don't have to pay up if battery life is important to you.

The Note 9 is no longer Samsung's biggest phablet — that honor goes to the newer Note 10 Plus — but its 4,000 mAh is still plenty big. This phone lasted 11:26 on our battery test, but that required us to turn off adaptive brightness. With that feature on, the phone died at 11:16. Look for prices to fall now that the Note 10 is out.

The iPhone 11 may be the least expensive of the new iPhone models Apple introduced this year, but it doesn't skimp on battery life. This $699 phone lasted more than 11 hours on our battery test, even if its time wasn't as good as the iPhone XR (which remains available with a lower price). The iPhone 11 supports fast-charging, but unlike the iPhone 11 Pro Max, you'll need to spring for an 18-watt charger, as that accessory isn't included with this model.