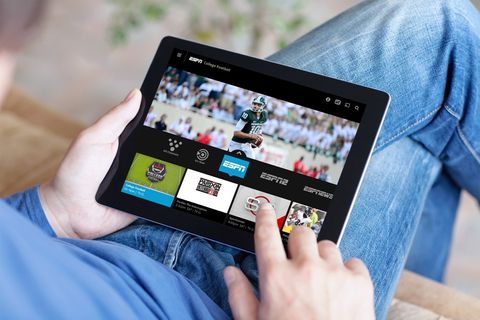 Sling TV delivers live cable channels for much less than the cost of a cable subscription, but its interface could use some work.

Sling TV was the first service to venture into the cable-replacement sphere. Back when it launched, with its attractive $20 price tag and handful of basic cable channels, it seemed like an unusual experiment; now, it's grown into one of the most comprehensive streaming services on the market. Whether you'll want Sling TV is, of course, dependent on what you watch — and how much you're willing to spend.

While Sling TV may have been the first game in town, it's not necessarily the best. Its interface remains a little wonky at the best of times, its DVR features are just coming into their own and costs can rack up fast if you want to watch anything beyond the basics.

Still, for the (potentially) cheapest cable-replacement service on the market, Sling TV generally delivers what it promises: live cable channels for much less than the cost of a cable subscription. If you're looking for a small supplement to an HD antenna or a quick fix for live sports, Sling TV is where you should begin your search. All of the latest news about Sling can be found in our What Is Sling TV? page.

Sling TV has gone a long way toward making its interface look consistent across platforms. The utilitarian gray-and-black menus with yellow accents are workable, but unimaginative. Finding content is fairly easy, although — depending on your platform — it might not be very fast.

Still, the selection feels arbitrary. Why isolate Sports and Movies rather than offer more nuanced categories? Other cable-replacement services (Hulu with Live TV, for example) offer nuanced choices like Science-Fiction TV Shows or Dark Comedy Movies; it's odd that users don't have the option to browse like that on Sling TV. What's the difference between On Now and Guide and Channels? (Answer: not much — just the way content is organized.)

Even My TV isn't all that it could be. Depending on your platform, My TV will let you access your favorite channels right away, but won't tell you what's on, making the feature fairly useless.

While Sling TV has put a considerable amount of polish into its Roku app (which is, so far, the only one that includes both the Guide and DVR features), some of its other incarnations don't fare as well. On the Xbox One, it's impossible to access on-demand content from shows with a large number of seasons, since the interface always defaults to the season closest to the bottom of the screen. The Xbox One navigation is also very twitchy; even just entering a password can be difficult.

The PC version feels unpolished; if you go back to the main menu while watching a show, there's no easy way to get back to your program, leaving it droning on in the background until you either pick something else to watch or navigate back there manually. The PC version is also a Windows store app rather than a web-browser client, limiting its compatibility and utility.

To be clear, nothing about Sling TV's interface is troublesome enough to compromise the overall experience. Once you learn the ins and outs, you can access your shows quickly and easily. But considering how far interfaces have come in the last few years (YouTube TV is snappy and efficient, while Hulu with Live TV is colorful and comprehensive), Sling TV has some room to improve.

As one of the veteran players on the market, Sling TV is available on a respectably wide variety of platforms. You can use Sling TV with Windows, Mac OS, Roku, Amazon Fire TV, Apple TV, Chromecast, Android TV, Xbox One and a variety of smart TVs and smaller streaming boxes.

While apps for PlayStation 4 and web browsers would be nice, Sling TV is probably the most widely available cable replacement at present, and it could still expand in the future.

Sling TV excels not only in the sheer variety of content it offers, but also in how it sells that content. Rather than asking you to sign up for an expensive package with a bunch of channels you don't want, Sling offers two basic options, and lets you build on top of that with some extremely granular offerings.

Sling Orange is a single-stream service that offers about 30 channels for $20 per month. Sling Blue is a multistream service (up to three simultaneous users) that offers about 45 channels for $25 per month. You can see the exact breakdown on Sling's website; some channels overlap between the two, while others don't. Both offer a pretty good mix of basic cable sports, kids' shows, prime-time networks and movie channels, and you can pay $40 per month for both services at once, if you choose.

In general terms, Sling TV is one of the most complete cable-replacement services around, as it offers just about all the basic cable staples. Between Orange and Blue, you'll get A&E, AMC, BBC America, CNN, Comedy Central, ESPN, the Food Network, IFC, Nick Jr., SyFy, TBS, TNT, Univision and more. On Blue, you can even get a few local stations, like Fox and NBC, depending on your region.

Where the service really shines, though, is in its additional channel packages. Additional packs range from $5 to $15 per month, and offer extra channels for interests spanning sports, kids' programming, movies and foreign-language TV. While it's not uncommon for a cable-replacement service to offer a Spanish package or two, Sling TV goes above and beyond with Arabic, Hindi, Italian, Polish, Portuguese and German channels, among others. You can also add Cinemax, Starz and HBO, including all the on-demand content that those stations offer.

On-demand content is the only place where Sling TV is a bit of a mixed bag. As mentioned above, it can be difficult to navigate on-demand content, based on your platform. However, that assumes you can find on-demand shows in the first place. Sling TV's search feature doesn't include a lot of on-demand content, which is odd, since some channels, such as FX, Starz and SyFy offer a veritable king's ransom of shows and movies. You'd never know Sling TV's on-demand content existed without digging into each individual channel's ponderous menus.

Sling TV is in desperate need of a better way to search and browse its surprisingly large on-demand library. (I spoke to company representatives, who assured me that they are working on this, as well as making usability fixes for the Xbox One platform.)

For an additional $5 per month, you can get 100 hours of DVR storage on Sling TV. The feature was in beta for a while, but now that it's finally available in full release, it's pretty straightforward. When you find something you want to watch, you select Record. If a movie you've selected is available on demand, the service will ask if you want to watch that instead, which is pretty useful. If you record a TV show, Sling will ask whether you want to record every episode of the series, just new episodes or only the current episode.

Depending on your viewing habits, 100 hours may not last you that long. To help manage space, Sling TV pushes out older recordings first, once the storage limit rears its ugly head. You can protect certain recordings if you want to hang onto them indefinitely. DVR is a feature that Sling TV needed in order to keep up with its competitors, and its implementation is satisfactory.

Although you can specify bandwidth limitations in Sling TV's settings, it's frustrating that there is no way to gauge video quality on any given stream. Generally, cable channels broadcast at 720p and movies can go up to 1080p, but there's no way to tell for sure.

On a 25-Mbps home Wi-Fi connection, some channels stabilized at HD resolutions right away; others started off fine, then had to buffer, then jumped between 480p and 720p for a minute or so before finally stabilizing at higher resolutions. While streaming on-demand movies, fast-forwarding more than about 30 seconds or so would often cause buffering and lower resolutions.

Since Sling TV insists that you can stream at its "best" quality with about 3 Mbps, certain channels and services are probably just better optimized than others. A way to measure video quality and buffering times would go a long way toward alleviating this issue, but to be fair, only YouTube TV currently offers this feature, and its implementation is half-hearted.

In the land of cable-replacement services, content is king, and Sling TV delivers content in spades. You could theoretically replace a cable or satellite subscription with just about every worthwhile channel for half the cost — or less, if you're a more casual viewer. Sling TV has something special to offer foreign-language viewers, and you almost certainly already own a compatible platform.

At the same time, Sling's interface lags behind its competitors, and its on-demand features need some work before users can really make the most of them. These issues aren't deal breakers, but other services — PlayStation Vue and Hulu with Live TV in particular — arguably handle them better.

Since Sling TV offers a free trial, there's every reason to check it out if you're looking to cut the cord. You may find that Sling TV is either a cheap and easy way to get your cable TV, or that it's not quite as robust as its competitors. Either way, Sling TV has been imitated often in the last few years, but, at present, rarely surpassed.