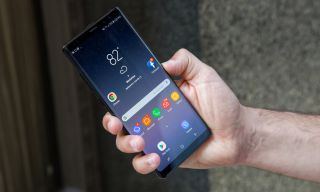 Samsung is hard at work putting the finishing touches on its upcoming Galaxy Note 9. But when the handset is released, it could come with a feature that might surprise those that had expected a Galaxy S9 clone. And a new report claims to have the details on why.

According to several reports, Samsung is planning a horizontally aligned dual-lens camera array in the Galaxy Note 9. That stands in contrast to the Galaxy S9+ and Apple's iPhone X, which both offer vertically aligned cameras.

According to SamMobile, Samsung is all but forced to go with the horizontal alignment in the Galaxy Note 9 for two key reasons: the device's gigantic battery and its support for the S Pen stylus.

Let's start with the battery.

According to several reports over the last few months, Samsung is trying to get a downright huge battery into the Galaxy Note 9. While the final battery size hasn't yet been tipped, it's believed it could range between a 3,850mAh pack to and 4,000mAh battery pack. That would make the smartphone's battery far bigger — and deliver much more capacity — than both its predecessors and competing devices.

But a bigger battery pack also translates to a larger size. And a larger size means it'll take up more room inside the smartphone, leaving less room for other components. To accommodate that big pack, Samsung is reportedly being forced to opt for a horizontal camera with a fingerprint sensor just below it. The battery pack will have enough space, and you'll still get your dual camera array.

But that's not all.

Since this is the Galaxy Note 9, Samsung is also bundling its S Pen stylus in the device. But again, that component, which sits inside the smartphone when it's not in use, takes up room. A vertically aligned camera would likely be too tall and leave no room for the stylus, according to the SamMobile report.

Still, there are some caveats here. And the biggest is that recent reports suggest the Galaxy Note 9 might only come with a slightly thicker frame than the Galaxy S9+. If that's the case, Samsung might have ultimately opted to ditch its big battery pack and keep a smaller option.

We'll find out for sure in August, when Samsung is expected to unveil and launch the device. But until then, expect the rumors to continue to pile up.