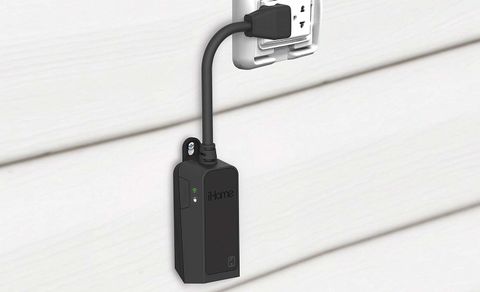 While more expensive than most smart plugs, this water-resistant plug lets you control your outdoor lights.

Do you like to light up the front of your house like Clark Griswold? Do airplanes mistake your holiday decorations for the nearby airport? iHome's ISP100 outdoor smart plug ($40) lets you turn all of them on and off from your smartphone, or by talking to Alexa, Siri or Google Assistant. It's also designed to withstand the elements, one of the few of our best smart plugs with that feature.

The iHome has a three-prong plug connected to a 6-inch cord. At the end is a black plastic box about 6 inches long that holds the plug's smarts, an on/off button and the female connector, into which you plug your lights. Two small LEDs near the button let you know if the plug is powered on and connected to Wi-Fi.

The plug is rated for 1800 watts. While it isn't IPX-rated for water resistance (and iHome recommends you plug it into a GFCI outlet), it should easily withstand the elements, according to the company.

As I imagine many will do, I tested the iSP100 by using it to control my outdoor Christmas lights. I plugged the iSP100 into my outdoor socket and then plugged the tree lights into the smart plug. I liked that the plug was designed to fit inside a covered outlet.

Next, I opened the iHome Control app on my iPhone (it works with Android, too) to connect the plug to my Wi-Fi network. During this process, I received an error message that said "incompatible network." Switching my iPhone from a 5-GHz Wi-Fi network to a 2.4-GHz network solved the issue.

As part of the setup process, the iHome app also lets you connect the plug into Apple's HomeKit; it's as simple as using the iHome app to take a photo of the HomeKit code on the plug.

The app lets you create schedules for when devices turn on and off, and group plugs and other iHome devices in different rooms or zones (so you can control multiple devices at once. The iHome doesn't have an Away mode, like TP-Link's app. But then again, TP-Link doesn't make an outdoor plug.

iHome's plugs work with a pretty wide range of smart-home systems. It's one of the best Google Home compatible devices, best Apple HomeKit products and best Alexa compatible products. It works with Nest, Samsung SmartThings and Wink, too. That's more than what most other smart-home devices offer.

The Wi-On Outdoor Switch costs just $27, and has two plugs, but you can't control them separately; the plug itself is only rated for 1000 watts (as opposed to 1800 for the iHome). It works with Alexa, but no other smart-home systems.

iDevices also makes an outdoor plug that also works with HomeKit, Alexa, and Google Home, has two plugs (you can't control them independently), but it costs $70.

Koolertron's outdoor plug ($45) has three plugs, each of which can handle a load of 1200 watts, and can be controlled separately. It also works with Alexa and Google Assistant.

iHome's iSP100 outdoor plug was simple to set up and works with a greater number of smart home systems than the competition. Although I wish it had more than one plug, its versatility and ease of use make it great for those who want a smart plug for the outside of their home, whatever the season.