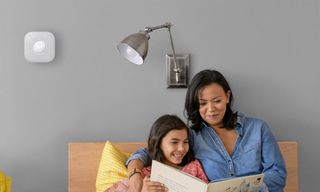 Smoke and fire detectors are an essential part of your home or apartment. Their loud, piercing alarms should wake you if there’s a problem, so you and your loved ones can safely escape, or put out the fire. Smart smoke detectors go a step further, as they can send an alert to your smartphone if they sense something amiss. That way, if you’re at work, or out of town, you can call the fire department or a neighbor check on your house, to see if everything is OK. Another benefit of a smart smoke detector is that you can temporarily silence the alarm from your smartphone — so there’s no more trying to jab the Silence button with a broomstick after you set it off while cooking a steak.

There's not a lot of choice when it comes to smart smoke detectors. Our favorite for a few years running is the Nest Protect. It's the most full-featured alarm, blaring out a loud siren and telling you where the problem is. It works with a lot of other smart home systems, so for example it can turn on all your Philips Hue lights, making it easier to find your way out.

However, if you don't want to spend more than $100 on a smart smoke detector, or already have a number of functioning smoke detectors in your home, then check out the Roost Smart Battery. This 9-volt Wi-Fi connected battery goes into any smoke detector, and alerts your phone when the alarm goes off.

Make sure you check out all of our top picks for smart speakers, lights, locks, and more on our best smart home gadgets page.

Nest’s smoke alarm detects both smoke and carbon monoxide, and when it does pick up something, it will not only sound an alarm, but will also tell you in what room the alert is coming from, and the nature of the alert. An LED ring on the bottom of the alarm also changes color, giving you a visual cue.

The Nest Protect comes in both wired and battery-powered versions. If you have more than one in your home, and one goes off, the others will too, alerting you to the location of the fire.

The Nest Protect also works with a wide range of smart-home devices. For example, in the event of an emergency, the Nest can automatically turn on your lights, making it easier for you to get out of your house.

The Roost battery is the best — well, only — option for those who already have smoke detectors, and want to make them “smart.” That’s because the Roost battery, which is Wi-Fi- enabled, sends an alert to your smartphone when the siren goes off. The second-generation battery looks and acts like the original, but has a much easier setup process.

Through the app, which can accommodate a large number of connected batteries, you have the option to silence the alarm for up to 2 minutes, and automatically send an alert to someone else. Additionally, you can link the Roost battery to other smart-home products through IFTTT, to, say, turn on your lights when the alarm goes off.

The battery is designed to last up to five years, and will work with any smoke/CO alarms that use a 9-volt battery, which includes hard-wired alarms with a 9V battery backup.

Roost has updated its app so that users can get notified when there is a severe weather alert, such as hail, freezing temperatures, heavy rainfall and snow, and storms and high winds.

A smoke detector with Alexa inside

Like the Nest Protect, the OneLink Safe & Sound detects smoke and carbon monoxide, sends an alert to your smartphone, and tells you the type and location of the fire or condition. But for those times when it's not warning you of fire, you can use it for a great many other things. With Amazon's Alexa (and a very competent 10-watt speaker), the Safe & Sound can play music, listen to audiobooks, and access Alexa's thousands of skills. (It's also compatible with Apple's HomeKit). However, the Safe & Sound requires a hard-wired connection, and we found that the location of these connections doesn't make it the most conducive for using all of Alexa's capabilities.

Works with Alexa and HomeKit

The second-generation Onelink Smart Smoke + Carbon Monoxide alarm comes in battery and hardwired models. Similar to the Nest Protect, the Onelink will not only sound an alarm, but also specify the room affected and the type of alert: smoke or carbon monoxide. Also like the Nest Protect, if you have more than one Onelink alarm, you can interconnect them so that if one goes off, they all will.

An LED rings the middle of the alarm and changes color based on the alarm's status. Green and blue indicate that the alarm is starting up or in pairing mode. Yellow means there's a malfunction or a low battery, while red means there's a fire or smoke condition.

The Onelink can be connected to HomeKit and Alexa (but not Google Assistant), so you can ask both Siri and Amazon's voice assistant for the status of the smoke detector, but not much else. By contrast, if the Nest Protect detects fire or carbon monoxide, you can have it automatically turn on a security camera, open Lutron blinds, turn on Philips Hue lights, turn off your heat and more.

Setup should theoretically be easy—just scan a HomeKit code in the Onelink app—but it took a few tries to get it to work. The Onelink smoke and carbon monoxide alarm is good on its own, but the Nest Protect does more for the same price.

What to look for in a smart smoke detector

All smoke detectors use one of two types of sensors to detect fires. Ionization-type sensors are best at detecting fast-burning fires, while photoelectric sensors are generally better at alerting you about smoldering, or slow-burning fires. You should have both types of alarms in your house. Smoke alarms such as the Nest Protect are designed to pick up both types of fires.

Carbon monoxide and other gas detection

Even if you don't have a fire in your home, you can be suffocated by carbon monoxide. A good detector should also protect you against this.

If your home has hardwired alarms, they will all be interconnected, so that if one goes off, they all will go off. Hardwired alarms also receive their power from your home, and only use batteries as backups. Standalone detectors run on batteries alone, so they may need to be replaced more often, and cannot signal each other in the event of an emergency (Nest's and OneLink's alarms are an exception to this). However, it's a lot easier to mount standalone smoke detectors where you need them.