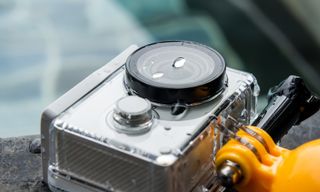 After testing more than a dozen action cameras under a variety of conditions, including a mountain biking trip and a rafting adventure, we consider the GoPro Hero7 Black to be the best action camera overall. It offers the best video quality, has excellent image stabilization, is waterproof to a depth of 33 feet without requiring a protective shell, has a built-in touch screen and responds to voice commands. However, its successor, the GoPro Hero 8 ($399) is now out, and offers even better image stabilization in a new design.

If you're looking for something a bit less expensive, the Yi Lite is our current favorite budget action cam. For less than $100, you get electronic image stabilization, a responsive touch screen and 4K video at 20 frames per second — though you'll want to stick to 1080p.

Make sure you check out all of our top picks for DSLRs, mirrorless cameras and more on our best cameras page.

GoPro is synonymous with action cameras, and for good reason. The company has always been the first to implement new features, better cameras and better designs, leading the competition to always play catch-up.

GoPro's latest flagship model, the Hero7 Black, continues that tradition. Building on the Hero6's design (waterproof to 33 feet, rear 2-inch color touch-screen LCD, voice control), the Hero7 adds 4K video at 60 fps and improved image stabilization that made all our footage look supersmooth. Plus, it can livestream to Facebook using the GoPro app. Once again, GoPro has made the best action camera you can get.

Depending on your needs, you may also want to check out the new GoPro Hero 8 ($399), which offers even better image stabilization across a wider range of resolutions.

For less than $100, the Yi Lite is a well-designed camera that can shoot image-stabilized video at up to 1440p; it can also shoot video up to 4K/20 fps, but we found that 1080p mode offered some of the best video. Among budget action cameras, it had the most intuitive interface. Gorilla Glass protects its 2-inch touch screen, though you'll need to spend an extra $40 to get the camera's waterproof housing if you plan to take it diving.

The Rylo 360 is just as small as any GoPro, which makes it great for attaching to a helmet, bike, surfboard — whatever. What makes it particularly suited for action sports is its motion-stabilization feature, which keeps the horizon level no matter how bumpy the ride. However, if you're going to get it wet, make sure to purchase its Adventure Case ($69), since this camera lacks any sort of waterproofing.

Rylo is discontinuing production of its cameras, but will continue to honor the warranty for existing users.

This camera has nearly all of GoPro's best features: 4K video recording, electronic image stabilization (up to 4K/30 fps), a touch screen and voice control. And, it costs $150 less. And, the quality was almost on a par with the GoPro Hero 6. So, what's missing? You need a case (sold separately for $40) to bring this camera into the water. And, we found its Android app to be a bit quirky.

The best action camera for selfies

The Osmo Action has a color screen on its front, which makes it much easier to frame yourself in photos and video. This durable camera also has very good electronic image stabilization, and it also can shoot HDR video. Unfortunately, you can't use HDR and image stabilization at the same time, and there's no way to livestream video from the camera. Still, for selfie enthusiasts, the front-facing camera alone could be worth the price.

For those looking to stay under $200 but still get features such as voice control and motion stabilization, the GoPro Hero is a good option. The camera's max resolution is 1440/60 fps (image stabilization only works up to 30 fps), and there's no slow-motion settings, but this Hero is waterproof to a depth of 33 feet without a case and has a touch screen on the back.

GoPro's older top-end action camera is still an excellent option. The Hero6 has many of the same specs — 4K/30 fps video, image stabilization and voice control — and is about $50 less than the Hero7 Black. While the camera lacks the ability to livestream video like the Hero7, if you don't care for that feature, then the Hero6 can save you some money.

The Hero5 Session offers image quality comparable to its larger siblings (4K/30 fps), but in a much smaller package. It's waterproof to a depth of 33 feet and includes image stabilization, Bluetooth and voice control. GoPro has phased out its Session cameras, though, so get it while supplies last.

On the large size for an action camera, the TG-Tracker has a flip-out screen so you can easily view what you're recording. It also has a 60-lumen light that helps illuminate darker scenes, image stabilization and a camera that's waterproof to a depth of 100 feet. This camera also tracks temperature, elevation, depth, latitude/longitude, distance traveled, barometric pressure and speed, so you can capture more than just amazing videos.