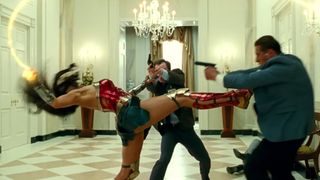 DC Comics’ daughter of Zeus is lassoing her way back to the big screen next year for her second solo cinematic adventure. Gal Gadot has thus far appeared in three films from the DC Extended Universe, but many saw her first eponymous film, released in 2017, as a stark departure from the poorly received Man of Steel, Batman v. Superman: Dawn of Justice, and Suicide Squad.

The sequel to Wonder Woman was announced at San Diego Comic Con in 2017, just a month after the film’s release, with the title Wonder Woman 1984 (abbreviated in promo materials as WW84) later announced the day the film started principal photography in June 2018.

It’s been a long time coming, but we’ve got all the info from Wonder Woman 1984’s winding road on its release date, how it fits into the DCEU, who the villains are, and more.

Wonder Woman 1984 release date: when does it come out?

Super excited to announce that, thanks to the changing landscape, we are able to put Wonder Woman back to its rightful home. June 5, 2020. Be there or be square!!!✨🙅‍♀️✨ pic.twitter.com/Wj8ORUQLdgOctober 22, 2018

It was previously scheduled for December 13, 2019, and then moved up to November 1, 2019 (likely to avoid competing at the box office with Star Wars: The Rise of Skywalker) before ultimately being pushed back to next summer.

Is there a Wonder Woman 1984 trailer?

Warner Bros. debuted the film’s first, and very ‘80s trailer on December 8, 2019 at CCXP in Brazil, as well as online. Watch it below for Wonder Woman in action, teases of her new foes, and an epic remix of New Order’s 1986 hit “Blue Monday.”

Who is the Wonder Woman 1984 director?

Patty Jenkins returns to direct the sequel to her critically acclaimed 2017 blockbuster, and this time she’s also serving as screenwriter, alongside DC Entertainment veteran Geoff Johns and David Callaham (The Expendables, Zombieland: Double Tap). Jenkins’ other directing credits outside of the DCEU include 2003 Oscar-winner Monster and episodes of Arrested Development, The Killing, and her own limited series I Am the Night, which also stars Chris Pine.

Who are the Wonder Woman 1984 villains?

Check out the new character posters from #WW84 - in theaters June 5. pic.twitter.com/O27ARDQHpADecember 8, 2019

It was officially announced in March that Kristen Wiig had joined the cast as classic Wonder Woman arch-enemy Cheetah, who, in the comics, is Diana’s friend before she turns to feline-themed villainy. Based on what little we see of Wiig in the movie’s trailer, this appears to hold true for the sequel. Also in March, it was confirmed that Game of Thrones and The Mandalorian star Pedro Pascal had signed onto the film, later revealed to be playing Maxwell Lord, a powerful businessman from the comics who has tangled with the Justice League on many occasions. The character has previously appeared in live-action on Smallville and, more recently, Supergirl.

Gal Gadot will once again don the armor of Princess Diana of Themyscira (aka Wonder Woman), while Chris Pine will return as Steve Trevor (more on that below). Connie Nielson and Robin Wright will reprise their roles from the first Wonder Woman as Hippolyta and Antiope, respectively. Natasha Rothwell, Ravi Patel, Gabrielle Wilde, Kristoff Polaha, and Amr Waked are all also listed in the cast, but in undisclosed roles.

Where does Wonder Woman 1984 fit in the DCEU timeline?

Hint: it’s right in the title. While the first film took place during World War I, Gal Gadot’s debut as Wonder Woman was in the modern day-set Batman v. Superman: Dawn of Justice, in which she came out of hiding to help the titular heroes battle Doomsday. That makes the 1984 setting slightly peculiar, especially since Diana is supposedly lying low from the end of the war until 2016.

The trailer offers a clue, however, as we see Diana use her tiara as a boomerang to take out security cameras while fighting off some men in a mall. Regarding the time period, director Patty Jenkins at CCXP said “We're running Wonder Woman right into mankind at their best and their worst and the villains that are born from that. So it's talking about now as much as it is the ‘80s, and it's using the ‘80s as a great metaphor to do it because the ‘80s really wore us at our most extreme before we understood any cost.”

How is Chris Pine back as Steve Trevor if [SPOILER]?

Great question! Steve Trevor did indeed sacrifice himself at the end of Wonder Woman, and even if he somehow survived, that was 70 years ago in the story’s timeline. Everyone involved with the film is remaining tight lipped on that one. But in the trailer, Pine is indeed Steve Trevor alive and well, seemingly with memory of the events of the first film. This is the question everyone seems to be asking, but we’ll likely have to wait until June 5 to find out.

What other big names are involved with Wonder Woman 1984?

Zack Snyder, the director who started the whole DCEU continuity with Man of Steel in 2013, announced he is producing the film alongside his wife, Deborah Snyder, in May 2018. Additionally, Dark Knight Trilogy, Man of Steel, and Batman v. Superman composer Hans Zimmer will score the film, having created the (absolutely killer) electric guitar theme that accompanied Wonder Woman’s cinematic debut, which Rupert Gregson-Williams incorporated into the score for her 2017 solo film.

Are there any Wonder Woman 1984 set videos?

Quite a few, actually! The film often shot on location.

The production shut down Pennsylvania Avenue in Washington, DC in June 2018. You can see Gal Gadot sprinting (very fast!) down the historic street in her full red and blue costume.

CHRIS PINE WANTED ME TO THROW AWAY MY PHONE TO AVOID SPOILERS AHDJSJHDHS HE DID THIS 3X pic.twitter.com/g82f7KCGhkJune 13, 2018

Chris Pine even toyed with some phone camera-armed onlookers while shooting a scene with Gal Gadot in Washington, DC.

That same month, Kristen Wiig was spotted doing a stunt that hints at her character’s feline abilities, marking our first, albeit unofficial, look at Cheetah proper. Cue the excitement!

For all things Wonder Woman 1984, keep it at Tom’s Guide.