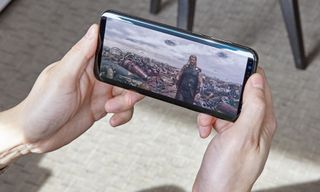 The latest leak to hit the Internet comes courtesy of a third-party case maker and shows what could be the final design of the forthcoming S9+. The case render, which was spotted by Android Headlines, shows a phone with a large screen similar to the one on the current Galaxy S8. The screen is flanked by thin bezels and curved edges, which confirms earlier reports that suggest the new phones will have the same size bezels as those found in the current Galaxy S8 line.

On the back, all signs continue to point to the Galaxy S9+ featuring a vertically aligned dual-lens camera array. There's also a physical fingerprint sensor seated under the rear cameras. That's better placement than the current fingerprint sensor in the Galaxy S8+ and should make it easier to sidestep smudging problems.

MORE: iPhone 8 and X Are World's Fastest Phones (It's Not Even Close)

Ultimately, the render suggests that Samsung is playing it safe with the Galaxy S9 line and won't dramatically change its design like it did with this year's models. However, Samsung is said to be planning some under the hood improvements, starting with the addition of a new Qualcomm Snapdragon 845 processor. The company could also deliver some new software improvements that would make its new smartphones far more intelligent and capable of handling tasks on the fly.

Samsung is expected to unveil the Galaxy S9 line in late-February with in-store availability by March.